Seeing God in the Poor 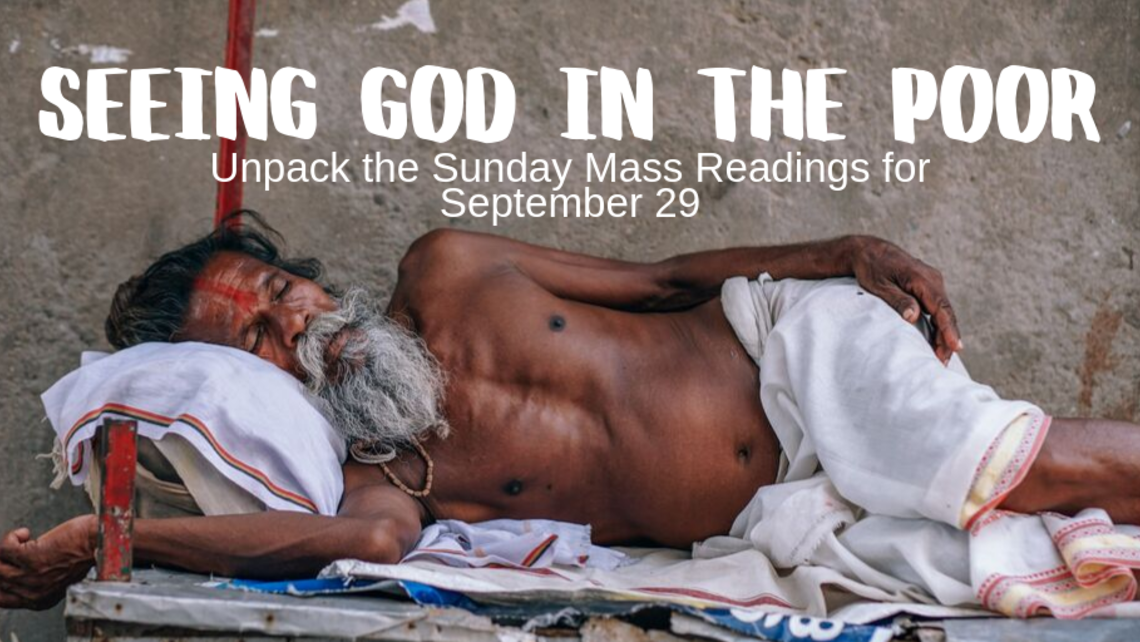 Unpack the Mass Readings for September 25

In the Gospel reading, Jesus tells a parable about a rich man who feasted every single day and Lazarus, a beggar, who lies outside the gate of the rich man’s house.

Now in Hades, the rich man wants the poor man to serve him, but Abraham says that isn’t possible. Nor is it possible for Lazarus to go back to earth and warn the rich man’s relatives. No, once we die, we are held accountable for what we did… and what we didn’t do. In this parable, it’s what the rich man didn’t do that has created his misery. The failure to do the good we should have done is called the sin of omission, and that’s where the guilt of the rich man rests. He never saw Lazarus as another human being so he did nothing to alleviate his suffering. He might not have actually added to Lazarus’ pain, but he failed to help him.

We all have people who are lying at the gate of our lives. Instead of stepping over them like the rich man did to Lazarus, we are called to use our resources, whatever they may be, to serve the poor in our lives lest we, too, be guilty of the sin of omission. In addition, the second reading this week, although it does not directly talk about material wealth, does instruct us in how to be rich in character and how to live in imitation of Christ. Both readings remind us that regardless of our own personal financial situation, we can all increase our faith in abundance by serving the poor we encounter in our daily lives.

Amos lived in a period of religious reform. The deeds Amos condemns are those of injustice to the poor, abuse of power, and sexual license. Even in the midst of these violations of the covenant life to which it had been called, Israel evidenced a self-satisfaction, an assurance of its own merit. While some in Israel enjoyed the luxuries that wealth can supply, others were sold into slavery or abused in the field or marketplace.

Amos suggested that Israel may well be worse off than it had been when worshiping other gods. There are solemn covenant obligations that come with the worship of the true God. Every gift we receive from God is meant for benefit of others as well as ourselves.

Just as the prophets warned Israel that its special status wouldn’t protect but rather condemn it if it failed to act in accord with that grace, so too the tremendous blessings of grace that we receive in the sacraments won’t assure our salvation if we’re not receptive to and transformed by them. The graces we’ve been offered will stand in witness against us if we refuse these gifts of God.

It is wealth that blinded Israel to the obligations of the covenant and its own complacency in the time of Amos, and Paul now warns Bishop Timothy that “some people in their desire for it have strayed from the faith and have pierced themselves with many pains” (1 Timothy 6:10). Our first reading describes the dangers to our religious commitment that wealth can pose, and this reading describes what the man or woman of God should seek as an alternative.

Writing from Macedonia to the young Timothy, this exhortation comes near the end of Paul’s letter. Paul shows no shyness about invoking his full authority in order to stiffen the commitment of Timothy in the face of false teachings that had appeared in Ephesus. All Christians, and not merely bishops, are called to the highest possible standard of integrity, piety, faith, love, steadfastness, and gentleness of spirit. Without the grace we receive from our profession of faith and the sacraments which flow from it, none of us could meet that standard.

This parable is about a rich man (sometimes called “Dives” in Latin, meaning “rich man”) and a poor beggar named Lazarus, who lives at the gate of the rich man. In the end, Dives finds “torment” in the afterlife and Lazarus finds “rest” in the bosom of Abraham. It’s this reference to Abraham’s bosom, traditionally understood as the place where the souls of the just awaited their redemption prior to Christ’s coming (CCC 633), which would have appealed to the Pharisees. Jesus may be issuing a warning to the Pharisees as well. Dives did nothing to offend Lazarus, he simply failed to notice him; his heart had grown hard to the point that he couldn’t see the needs of a man sitting at his own gate.

There’s a religious corollary to the hardness of the heart that material wealth can cause. We can easily become complacent toward those who are outside the Church because of the wealth that God has given us in all the graces of the new covenant. We must strive to be more attentive to the needs of those at our gates, even those outside our covenant family. In the case of both material help and sharing the Gospel, fidelity to God and his covenant demands it.

Watch the 5-minute Opening the Word video. Then reflect on the following questions with a friend:

In the video, the strong disparity between the way the rich man lived and the way Lazarus lived is mentioned. How does Jesus describe the rich man? How does he describe the poor man? Is Jesus telling us that you cannot go to heaven if you have material wealth? Explain.

Reprinted with permission from  Augustine Instituted from the Opening the Word Leader Guide available on FORMED.org

Several of them are extraordinarily difficult for... END_OF_DOCUMENT_TOKEN_TO_BE_REPLACED

Lent begins this Wednesday, February 26. The season of Lent is the liturgical season consisting... END_OF_DOCUMENT_TOKEN_TO_BE_REPLACED

The second collection on March 8th will go toward the purchase of backpacks and supplies for families who... END_OF_DOCUMENT_TOKEN_TO_BE_REPLACED