The Traditional Latin Mass (Extraordinary Form of the Mass or the Tridentine Mass) will be offered at St Michael's once per month, on the second Sunday at 8:00 am.

When will the Latin Mass take place?

Twice per month, every second & fourth Sundays at 8:00 am.

Are missals provided for the Latin Mass?

Are the readings in Latin?

Yes and no. When the scriptural passages are read in the context of the Mass, they are read in Latin, though of course you can read along with the English translation in your missal. Immediately before the sermon, the priest then repeats the readings in the vernacular language.

Do I kneel to receive Holy Communion? Do I receive on the tongue? Do I say "Amen"?

Yes, yes, and no. Communicants kneel at a Communion rail and receive on the tongue. The Extraordinary Form places great emphasis on avoiding any possibility of profanation of the host. You will notice, for example, that the priest holds the ciborium rather awkwardly. That is because, from the moment of the consecration until the purification of the sacred vessels, he may not separate his thumb and forefinger, lest even the smallest particle fall to the ground. It would be incongruous, after that kind of studious care, for him then to place the host into a layman’s outstretched hand.

The communicant does not say "Amen." The priest says it as he places the host on the communicant’s tongue. The priest does not say, "The body of Christ." He says, "May the body and blood of our Lord Jesus Christ preserve your soul unto everlasting life. Amen." Amen, of course, means "let it be so." In other words, "may this reception of Holy Communion have the effects for which I have just prayed."

Will the priest have his back to the congregation?

Yes—but that is the wrong way to think about it. It is not a question of turning his back on the people. Instead, the priest and the people together face the same direction. Masses in which priest and people face a common eastward direction, whether in the Ordinary or Extraordinary Form, are called ad orientem Masses.

Fr. Joseph D. Santos, Jr., a priest of the Diocese of Providence, Rhode Island, gives a straightforward explanation of this traditional practice:

Scholars have begun to conclude, contrary to popular belief, that Mass facing the people was not in fact the regular practice of the early Church, and that Mass facing east has been the historic norm. "As I have written in my books, I think that celebration turned towards the east, towards the Christ who is coming, is an apostolic tradition," wrote Pope Benedict XVI in 2004, while still Cardinal Joseph Ratzinger (Looking Again at the Question of the Liturgy with Cardinal Ratzinger: Proceedings of the July 2001 Fontgombault Liturgical Conference, 151). In fact, those parts of the early Catholic world in which the sacrificial aspect of the Mass was best understood were most likely to celebrate Mass ad orientem. "The common direction of priest and people is intrinsically fitting and proper to the liturgical action," Cardinal Ratzinger explained (Foreword, Turning Towards the Lord: Orientation in Liturgical Prayer by U.M. Lang).

Will I be able to get anything out of it if I don’t speak Latin?

Of course. For centuries the popes insisted on the value of a non-vernacular language for the Mass, and as Catholics we owe them at least the benefit of the doubt that they cared about the spiritual lives of the faithful. It’s easy to follow along in your missal, especially once you’ve attended this Mass a few times. Next to no one spoke Latin in the old days, and yet their souls were deeply nourished by the Mass, and (if polling data is to be believed) they understood the meaning of the Mass far better than do most Catholics today.

It’s important to remember what Pope Bl. John XXIII said about the value of Latin. "The Catholic Church," he explained, "has a dignity far surpassing that of every merely human society, for it was founded by Christ the Lord. It is altogether fitting, therefore, that the language it uses should be noble, majestic, and non-vernacular" (Veterum Sapientia, On the Promotion of the Study of Latin). It makes sense that we should leave behind what differentiates us from each other as Americans, Mexicans, Hondurans, Vietnamese, Frenchmen, Koreans, or whatever, and meet for worship in a language that privileges no single group but is the common possession of us all. Just two generations ago, wherever someone went in the world he would encounter the same Mass he knew at home—a beautiful testament to the universality of the Church.

That’s one of the things that so impressed the British communist-turned-Catholic Douglas Hyde, who had looked in vain to secular organizations to give expression to the unity of the human race. In the mid-20th century he found what he was looking for in the Catholic Church, having been especially moved by its use of Latin:

"At 11:30 p.m. on Christmas Eve I was twiddling the knob of my radio. Unable to get out to Midnight Mass I wanted at least to bring it to my fireside. And as I switched from one European station to the next I tuned in to one Midnight Mass after the other. Belgium, France, Germany, Eire, yes, even behind the Iron Curtain, Prague. It seemed as though the whole of what was once Christendom was celebrating what is potentially the most unifying event in man’s history. And the important thing was that it was the same Mass. I am a newcomer to the Mass but I was able to recognize its continuity as I went from station to station for it was in one common language. This aspect of Catholicism is but a single one, and maybe not the most important. But I have a strong feeling that it is precisely the Catholicism of the Catholic Church which may prove the greatest attraction, and will meet the greatest need, for my disillusioned generation. (qtd. in Michael J. Miller, The International and the Introibo: How the Catholic Mass Converted a Communist, Sursum Corda, Winter 1999)

Amid all the speculation regarding the Pope’s motu proprio, columnist Barbara Kay, who attends an all-Hebrew service at her synagogue, explained why she as a non-Catholic favored the use of Latin in the Mass:

"The power of liturgy to lift us out of our narrow practical and material pursuits is not dependent on our understanding of every actual word we are saying, any more than our emotional submission to classical music’s soaring magic is dependent on our ability to read the score that produced it. . . . An ancestral, globally employed language like Hebrew or Latin provides a context for predictable and organic communion amongst those present at the service. Through regular engagement, even though rote, with a universally recognized language, worshippers are subliminally imbued with a common motivational narrative from the past, common moral goals in the present and intimations of a common destiny in the future." (National Post, Latin’s Second Coming, October 18, 2006)

She concluded her article for Canada’s National Post very simply: "Bring back the Latin Mass."

Vatican II urged that "the use of the Latin language is to be preserved in the Latin rites," (Sacrosanctum Concilium, 36.1) and declared that the faithful should "be able to say or to sing together in Latin those parts of the Ordinary of the Mass which pertain to them" (SC 54).

PROTESTANT VISITS LATIN MASS! What I LOVED and HATED.

Why Restore This Mass? 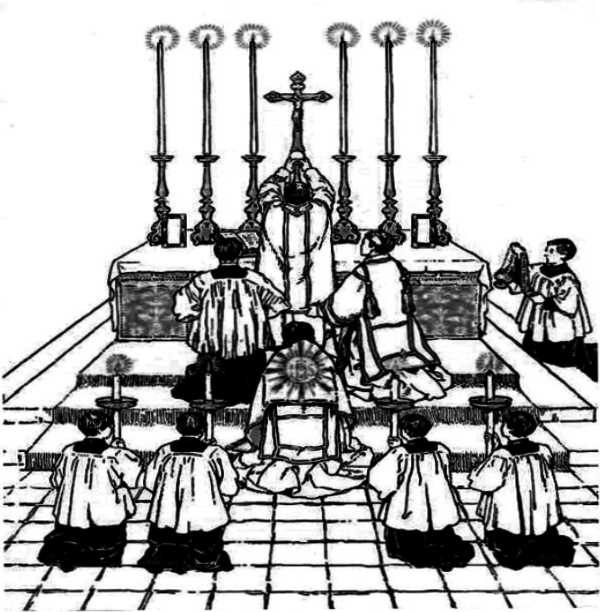 It is a chance to experience, especially during our Centennial celebration year, the way Catholics worshiped in this same church building from 1918-1970.

Latin is an "equalizer" language that will allow our diverse ethnic communities to worship together in unity.

The more readily apparent focus on the Eucharist in the Latin Mass is appealing to those who are regulars at Eucharistic Adoration.

The community at St Michael's has been asking for an Extraordinary Form Mass for decades.