The Legion of Mary is an international Catholic association for the purpose of the glory of God through the holiness of its members, developed by prayer and active cooperation in Mary’s and the Church’s work.

We engage in door-to-door evangelization.

We bring the good news of the Scripture and Communion to nursing homes and residential homes.

We meet weekly and always begin with the recitation of the Holy Rosary.

The largest lay apostolate organization in the world, whose primary purpose is to bring personal sanctification to its members and, secondly, to bring all others into a closer relationship with Jesus through Mary and His Church on earth. The object of the Legion of Mary is the glory of God through the holiness of its members developed by prayer and active cooperation, under ecclesiastical guidance, in Mary’s and the Church’s work of crushing the head of the serpent and advancing the reign of Christ.

The Spirit of the Legion

The spirit of the Legion of Mary is that of Mary herself. Especially does the Legion aspire after her profound humility, her perfect obedience, her angelical sweetness, her continual prayer, her universal mortification, her altogether spotless purity, her heroic patience, her heavenly wisdom, her self-sacrificing courageous love of God, and above all her faith, that virtue which has in her alone been found in its utmost extent and never equalled.

To become a Legionary is to be part of Mary's Army of Angels & Legionnaires. The legionaries hope to render themselves worthy of their great heavenly Queen by their loyalty, their virtues, and their courage. The Legion of Mary is therefore organized on the model of an army, principally on that of the army of ancient Rome, the terminology of which is adopted also. But the army and the arms of legionaries of Mary are not of this world.

The unit of the Legion of Mary is called a praesidium, originally from a Latin word used to designate a detachment of the Roman Legion performing special duty, that is, a section of a military line, a fortified post, or a garrison. Each praesidium is named after a title of Our Blessed Lady (e.g. Mother of Good Counsel), from one of her privileges (e.g. The Immaculate Conception), or from an event in her life (e.g. The Visitation).

A praesidium meets every week, conducted after the manner described in the Legion of Mary Handbook Chapter 18, Order of the Praesidium Meeting, and shall have its own officers (President, Vice-President, Secretary, and Treasurer) and a priest as Spiritual Director.

Every praesidium is under the governance of a higher body called the Curia which comprises multiple praesidia within a region. The next hierarchy following the Curia is Comitium, a group of curiae. Curia and Comitium are lower councils that report to a Senatus. A Senatus is typically the highest council within a country. In certain regions where there are no Senatus, a lower council called the Regia is instituted. The highest governing body of the Legion of Mary to which all Senatus councils throughout the world report is the Concilium Legionis which is based in the Legion's founding country, Ireland. 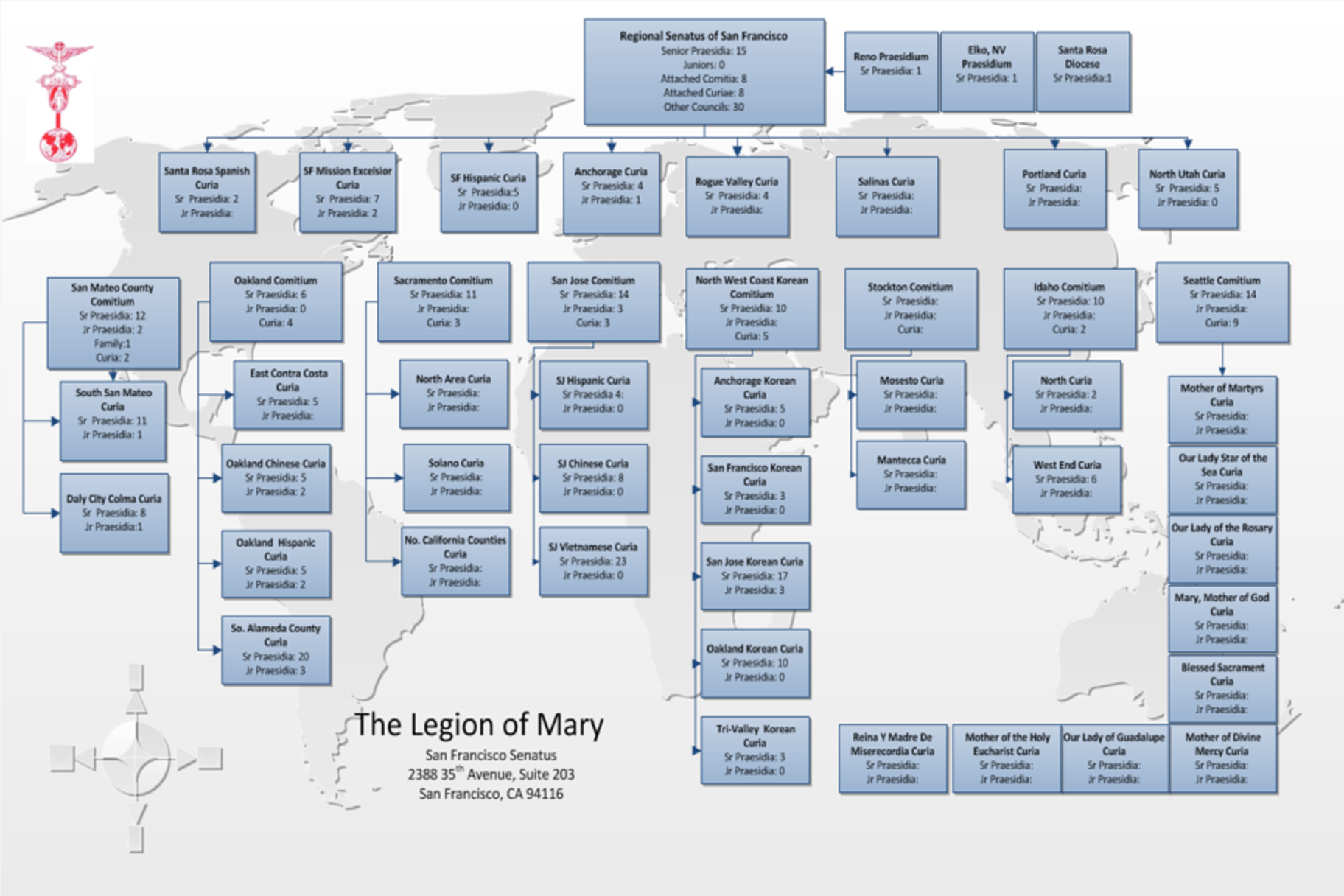 Like Mary, Legionaries make haste to do the will of God and the work of the Kingdom through conversion, conservation, and consolation.

Actions to teach and evangelize those seeking a deeper union with God be of other faith, lapsed Catholic, or anyone searching for truth, peace, and love.

Actions to renew and enliven the faith of Catholics, drawing them closer to God and encouraging family participation in prayer and service.

Actions to console the sick, homebound, and suffering by visiting and bringing them the Good News of Christ and the comfort of God’s Love.

The Enthronement of the Most Sacred Heart of Jesus and the Immaculate Heart of Mary is a solemn installation of their images in a Christian home.

It is an Act of Consecration recognizing the rule of Jesus and Mary over the family.

Prepare. Before the enthronement ceremony, the family must recite certain prayers to prepare their hearts and homes for the Consecration.

Receive. A clergy and some Legion of Mary members visit the home at the scheduled time and perform the Enthronement ceremony.

Live. The family must strive towards holiness seeking the guidance of Jesus and Mary, and renew their Act of Consecration especially on special occasions, e.g., Feasts of the Sacred Heart, Christ the King, Immaculate Concepcion, Anniversary of the Enthronement, anniversary of parents, birthdays, etc.