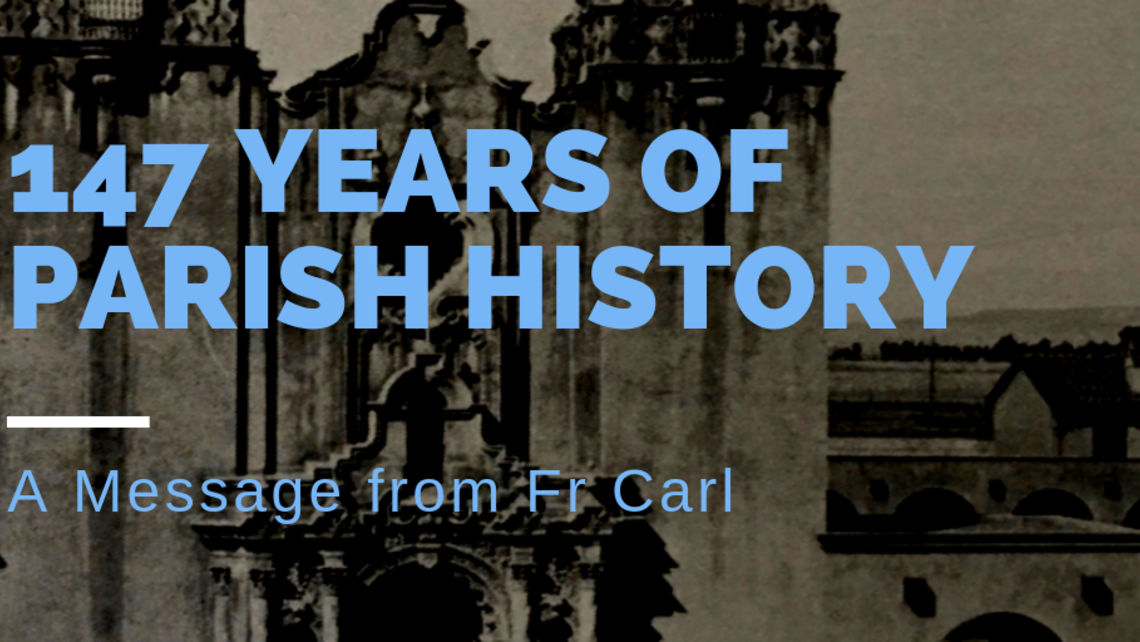 This weekend let us go back in time in to the history of our parish to know the roots of our community festival. I would like to thank Barbara Mitchell for her research and for helping me share our parish’s rich history.

St. Michael Parish was authorized by Archbishop Alemany of San Francisco on September 25, 1872, though no pastor was assigned until 1878.  During those early years, Livermore’s 200 Catholics built a small church to be used when visiting priests could be brought in.  Reverend J. F. Cassidy, the first pastor arrived in 1878 and led a flock comprised largely of newcomers from Ireland, Italy, Portugal and those of Spanish heritage already here.  The new settlers ranched and farmed in the surrounding hills.  Their family names are still familiar in our valley:  Concannon, Livermore, Alviso, Fallon, Collier, Regan, Murray, Scullion, Callaghan, Moy, Kiely, O’Brien, Basso, Serpa, and Bettencourt.

Father Patrick Power was the pastor from 1879 to 1915, making his mark on the character of the city and the parish.  Fr Power, a tall man of action and moral courage, was a native of Ireland.  He built a parish residence in 1881 and followed it with a larger Gothic style church in 1891.  Thanks to him, 10 acres of land was purchased on East Avenue to use as a cemetery.  The 1890’s saw continued growth of European immigrants, and the start of lay organizations such as the Young Men’s Institute (Y.M.I.) and Young Lady’s Institute (Y.L. I.).  Portuguese settlers from the Azores founded the fraternal organization Irmandade do Divono Espirito Santo (brotherhood of the Divine Holy Spirit or I.D.E.S).  Church social events continued to grow, both as fundraisers for parish needs and to develop cohesion and identity for Catholic residents.

Father Power was unrelenting in attacks on vice.  He was known to deliver rebukes to wayward parishioners from the pulpit.  The local paper said he was “the greatest factor in the moral growth of Livermore.”  His funeral in 1915 drew an unexpected tribute from every saloon in town, which closed during his funeral to show respect.

Faithful religious education was a dream of Father Power from the start of his pastorate.  He led Sunday school for children until he was able to establish the St. Michael’s Academy, which opened in 1913 with four teachers from the Dominican Sisters of San Rafael.  The parish continued to support after school education for public school students.

During the hot, dry summer of 1916, the Gothic church, built of redwood, caught fire and burned.  Our next pastor, Father McKinnon, purchased land adjacent to St. Michael’s Academy (now St Michael School) to build our present church.  During the years of its construction (1916-1918) the United States was embroiled in World War I, but parishioners came forward with the necessary funds and labor to complete it.  Built in a Spanish Renaissance style, our current church is made of concrete to reduce the risk of fire.

Each decade has brought new Catholics to Livermore.  The city grew tremendously in 1952 when the Lawrence Radiation Laboratory brought scientists, engineers, and technicians. The increase in parishioners required significant funding to meet the population boom.  The parish decided to raise the money by sponsoring an annual fall festival in the St. Michael School grounds. The first festival was so successful that everyone in town participated and people in other communities asked for advice on how to start one.  We will continue this tradition to honor the Feast of St Michael the Archangel from September 20 through 28 with a novena of Masses, a festive Hawaiian themed dinner auction, parish raffle and a ministry fair.

May God bless you and your families,

Phase 1 of our Asphalt Maintenance Project was repairing and restoring our church parking lot. We are happy to... END_OF_DOCUMENT_TOKEN_TO_BE_REPLACED