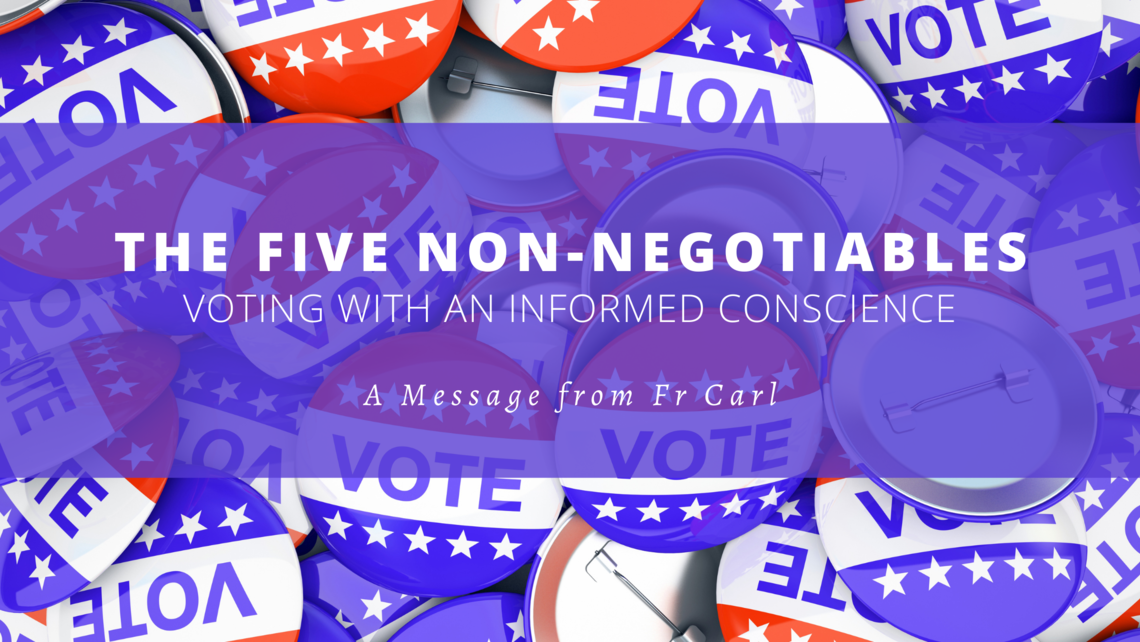 Voting with an Informed Conscience

As we approach the 2020 National Elections, I will focus my October pastoral messages on how to prepare to vote with an informed conscience, empowered and guided by our Catholic Faith. At each Mass in October and each day at Adoration to the Blessed Sacrament, we will offer prayers for peace during the election process and for wise voting decisions of Christians.

Our vote as citizens is a sacred right. Our vote can shape the direction of our nation and community toward Christ’s mission of building His kingdom here on earth. Hence, we must vote according to what our Catholic faith teaches.

The Catechism teaches that “…there are acts which, in and of themselves, independently of circumstances and intentions, are always gravely illicit by reason of their object.” (CCC 1757).

Pope St. John Paul II expanded on intrinsic evil in Veritatis Splendor (1993).  He explains that “If acts are intrinsically evil, a good intention or particular circumstances can diminish their evil, but they cannot remove it. They remain ‘irremediably’ evil acts…”

It is our Catholic responsibility that we must evaluate the policies embraced by a political party, candidate or law.  It is not enough to say that there is “some” good if there is intrinsic evil. As faithful Catholics and disciples of Jesus, we cannot support the five non-negotiables. Please see below further education of Catholic teaching on these five non-negotiables.

Pope Francis encourages us, "We need to participate for the common good. Sometimes we hear: a good Catholic is not interested in politics. This is not true: good Catholics immerse themselves in politics by offering the best of themselves so that the leader can govern." -  9-16-13

May St.Michael Protect you and your family!

CCC 2258: "Human life is sacred because from its beginning it involves the creative action of God and it remains for ever in a special relationship with the Creator, who is its sole end. God alone is the Lord of life from its beginning until its end: no one can under any circumstance claim for himself the right directly to destroy an innocent human being."

CCC 2261: "...The deliberate murder of an innocent person is gravely contrary to the dignity of the human being..."

CCC 2270: "Human life must be respected and protected absolutely from the moment of conception. From the first moment of his existence, a human being must be recognized as having the rights of a person - among which is the inviolable right of every innocent being to life."

It is the social teaching of the Catholic Church that abortion is immoral and a grave sin. Anyone who has, or even participates in (with full knowledge) an abortion is committing a grave sin against not only his own soul, but also against Our Lord and Creator, Jesus Christ, and His creation of man. It is our duty to educate and comfort those in pain, especially when effected by such an atrocity as abortion.

CCC 2277: "Whatever its motives and means, direct euthanasia consists in putting an end to the lives of handicapped, sick, or dying persons. It is morally unacceptable. Thus an act or omission which, of itself or by intention, causes death in order to eliminate suffering constitutes a murder gravely contrary to the dignity of the human person and to the respect due to the living God, his Creator. The error of judgment into which one can fall in good faith does not change the nature of this murderous act, which must always be forbidden and excluded. "

CCC 2278: " Discontinuing medical procedures that are burdensome, dangerous, extraordinary, or disproportionate to the expected outcome can be legitimate; it is the refusal of "over-zealous" treatment. Here one does not will to cause death; one's inability to impede it is merely accepted. The decisions should be made by the patient if he is competent and able or, if not, by those legally entitled to act for the patient, whose reasonable will and legitimate interests must always be respected."

It is the teaching of the Catholic Church that euthanasia for the motive of eliminating suffering is morally unacceptable. God is the ultimate power when it comes to our lives and when our time has come. While one can still discontinue medical procedures when the treatment becomes too burdensome or extreme that, while extending the life a small amount, the party accepts that death is imminent (besides the attempts to impede it), and is therefore acceptable, though this decision should be made by the patient, if competent enough.

USCCB: "... the Church supports ethically responsible stem cell research, while opposing any research that exploits or destroys human embryos.... Because the Church opposes deliberately destroying innocent human life at any stage, for research or any other purpose, it opposes embryonic stem cell research as currently conducted. However, when scientists proposed avenues for possibly obtaining embryonic stem cells or their pluripotent equivalent without creating or harming embryos.... Clearly, the Church favors ethically acceptable stem cell research. It opposes destroying some human lives now, on the pretext that this may possibly help other lives in the future. We must respect life at all times, especially when our goal is to save lives."

The Catholic Church stands firmly with a pro-life stance. Similar to abortion, every life is sacred and must be treated with dignity. We are not to murder any current life at any stage for the furtherment of future research.

CCC 354: "Respect for laws inscribed in creation and the relations which derive from the nature of things is a principle of wisdom and a foundation for morality."

CCC 1700: "The dignity of the human person is rooted in his creation in the image and likeness of God."

1995 Encyclical Letter of Pope John Paul II 'The Gospel of Life': "The various techniques of artificial reproduction, which would seem to be at the service of life and which are frequently used with this intention, actually open the door to new threats against life. Apart from the fact that they are morally unacceptable, since they separate procreation from the fully human context of the conjugal act, these techniques have a high rate of failure: not just failure in relation to fertilization but with regard to the subsequent development of the embryo, which is exposed to the risk of death, generally within a very short space of time. Furthermore, the number of embryos produced is often greater than that needed for implantation in the woman's womb, and these so-called 'spare embryos' are then destroyed or used for research which, under the pretext of scientific or medical progress, in fact reduces human life to the level of simple 'biological material' to be freely disposed of."

The Catholic Church is against the concept of human cloning because it goes against the natural law that God created. God's law is that new life can only come from the conjugal act, making it against God's law to clone humans without that act.

CCC 2357: "Homosexuality refers to relations between men or between women who experience an exclusive or predominant sexual attraction toward persons of the same sex. It has taken a great variety of forms through the centuries and in different cultures. Its psychological genesis remains largely unexplained. Basing itself on Sacred Scripture, which presents homosexual acts as acts of grave depravity, tradition has always declared that "homosexual acts are intrinsically disordered." They are contrary to the natural law. They close the sexual act to the gift of life. They do not proceed from a genuine affective and sexual complementarity. Under no circumstances can they be approved."

CCC 2358: "The number of men and women who have deep-seated homosexual tendencies is not negligible. This inclination, which is objectively disordered, constitutes for most of them a trial. They must be accepted with respect, compassion, and sensitivity. Every sign of unjust discrimination in their regard should be avoided. "

CCC 2360: "Sexuality is ordered to the conjugal love of man and woman. In marriage the physical intimacy of the spouses becomes a sign and pledge of spiritual communion."

It is the teaching of the Catholic Church that homosexual "marriage" is not marriage and goes against God's instituted natural law. Marriage was created for a man and a woman who are open to life to express to each other the full self-giving and unity of the sacrament and each other. Since this cannot be obtained through same-sex unions, the Church teaches that the act of homosexuality is morally wrong. While it condemns the act, the individuals are to be loved, with respect and compassion directed towards them as they struggle to find their way to Christ and His calling for them.

Here are just a few things your donations have... END_OF_DOCUMENT_TOKEN_TO_BE_REPLACED

that integrates modern principles of psychology and... END_OF_DOCUMENT_TOKEN_TO_BE_REPLACED