Perserverance in Times of Trial 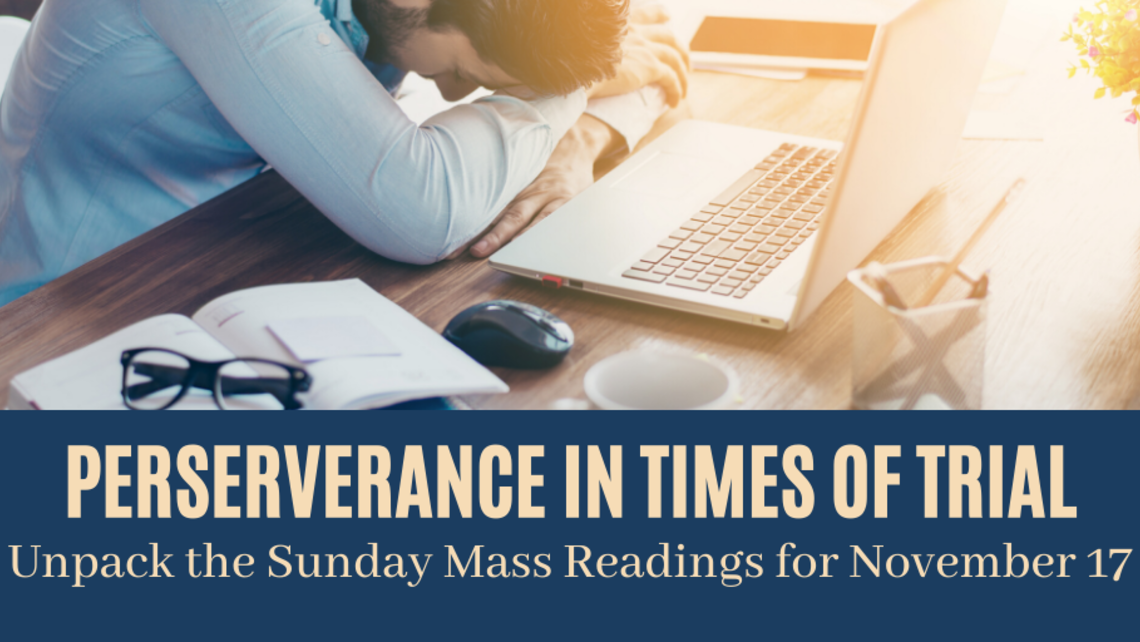 As you begin your study on the readings for the Thirty-Third Sunday in Ordinary Time, reflect on one particular difficulty or trial you are currently undergoing, and offering up that pain to Jesus.

In this week’s Gospel reading, Jesus speaks of scary things—wars, famines, persecution, plagues, earthquakes, and signs falling from the skies. Yet in the midst of his warnings about the judgment coming on earth and the persecution his followers will face, Jesus exhorts his disciples, “By your perseverance you will secure your lives.”

Perseverance is the key. Will the disciples remain faithful to Jesus when their faith is tested most—when they face trials, sufferings, and even persecution? For first-century Christians who might be hated for the sake of their faith in Christ, the words of Jesus would provide reassurance and hope. Jesus will always strengthen and comfort those who persevere in faith. And we can rest in this same hope today.

Just as the early Christians persevered in times of trial, so too are we called to persevere in the daily crosses the world might inflict upon Christ’s followers today. While not all of us are called to literally die for the faith like the early Christian martyrs did, we all are called to die to ourselves in many little ways each day through the sacrifices we make for our faith and by persevering through the misunderstanding, ridicule, and even hostility we might face for remaining faithful to Christ in our secular world today.

Malachi, a name which means “my messenger,” is the last word of the Old Testament as it falls last in the canon of its books. Writing about 400 years before the coming of Christ, Malachi has some scathing things to say about the irreverence of the worship and immorality of the actions of the priests and people of Israel after the return from Babylonian exile. God threatens to throw dung in the faces of the priests for offering defective sacrifices and not teaching the true doctrine of the covenant. He chastises the laity for being unfaithful to their marital covenants and for cheating the poor.

That’s the setting for our reading which speaks of the Day of the Lord, described as “blazing like an oven.” This section of Malachi begins in 3:16 and is directed to “those who fear the Lord.” These are the ones who’ll be spared God’s wrath and enjoy the “sun of justice.” Malachi leaves us with this beautiful and consoling image. As with all of the prophets, judgment always finishes with mercy.

One of the wonderful characteristics of Christianity is that it’s a livable creed. God intends that all be saved and so he has revealed to us a way of living that’s moderate and ordered and which doesn’t crush human nature, but rather brings it to its fullest flower.

Paul is believed to have been a tentmaker by trade. In this portion of Paul’s letter to the Thessalonians, he counsels them on the value of labor; of simply doing the business at hand in a quiet and industrious manner. Part of this same reading appears in the Lauds or Morning Prayer for the first Monday in the four-week cycle of Psalms in the Liturgy of the Hours; the official prayer of the Church. So the first workday in the Church’s official prayer book gives us this encouragement to make our labor a prayer to the creator who labored in creating the cosmos and then, as a carpenter in Nazareth, and finally, to give us eternal life by bearing the cross to Calvary.

Jesus gives a warning in outline form that elaborates on the prophecy he uttered in Luke 19:41-44 about the fall of the Temple. The importance of that event owes much to the symbolism represented in the construction of the Temple and its significance to the Jewish people. The Jews believed that God had designated the Temple Mount in Jerusalem as the place where he had specifically directed that his name would be hallowed. Jewish lore held that the Temple rested at the center of the universe and at a place where heaven, earth, and the underworld intersected. The Temple was constructed in three parts (Outer Court, Holy Place, and Holy of Holies) which corresponded to the three great divisions of creation (water above the heavens, land, and the water around the land). The Temple was a kind of microcosm, a universe miniature.

When Jesus foretells its destruction, he’s in effect saying that the old world is passing away and that time is pregnant with a new age which is about to come to birth. That new age is the kingdom of God, the New Covenant in Christ. That’s the world we inhabit as Catholics, citizens of that kingdom, and heirs of that covenant.

In our world today, suffering (of any kind) is seen as the greatest of evils and is to be avoided at all costs. Jesus, however, calls us to face the trials that may come our way with courage. Take some time by yourself right now and reflect on a troubling area in your life. Are you approaching that difficulty with confidence and hope in the Lord or with discouragement, frustration, or despair? Watch the short Opening the Word video found at FORMED.org, then ponder these questions:

According to the video presenter, Jules Miles, how was cataclysmic imagery about earthquakes, plagues, and stars falling from the sky used in the Old Testament? What changes with Jesus’ use of the imagery? If you were a Jew during the time of Christ, what would you interpret the “end of times” to mean? Knowing this, why do you think the Church uses these readings when it does in the liturgical calendar?

The message of today’s Gospel reading is meant to inspire hope in those who hear it. Why were early Christians in need of this message? Why is this message applicable for us today, too? How are we also called to respond by this Gospel message?

“What will separate us from the love of Christ? Will anguish, or distress, or persecution, or famine, or nakedness, or peril, or the sword?...No, in all these things we conquer overwhelmingly through him who loved us. For I am convinced that neither death, nor life, nor angels, nor principalities, nor present things, nor future things, nor powers, nor height, nor depth, nor any other creature will be able to separate us from the love of God in Christ Jesus our Lord.”

Several of them are extraordinarily difficult for... END_OF_DOCUMENT_TOKEN_TO_BE_REPLACED

Lent begins this Wednesday, February 26. The season of Lent is the liturgical season consisting... END_OF_DOCUMENT_TOKEN_TO_BE_REPLACED

The second collection on March 8th will go toward the purchase of backpacks and supplies for families who... END_OF_DOCUMENT_TOKEN_TO_BE_REPLACED