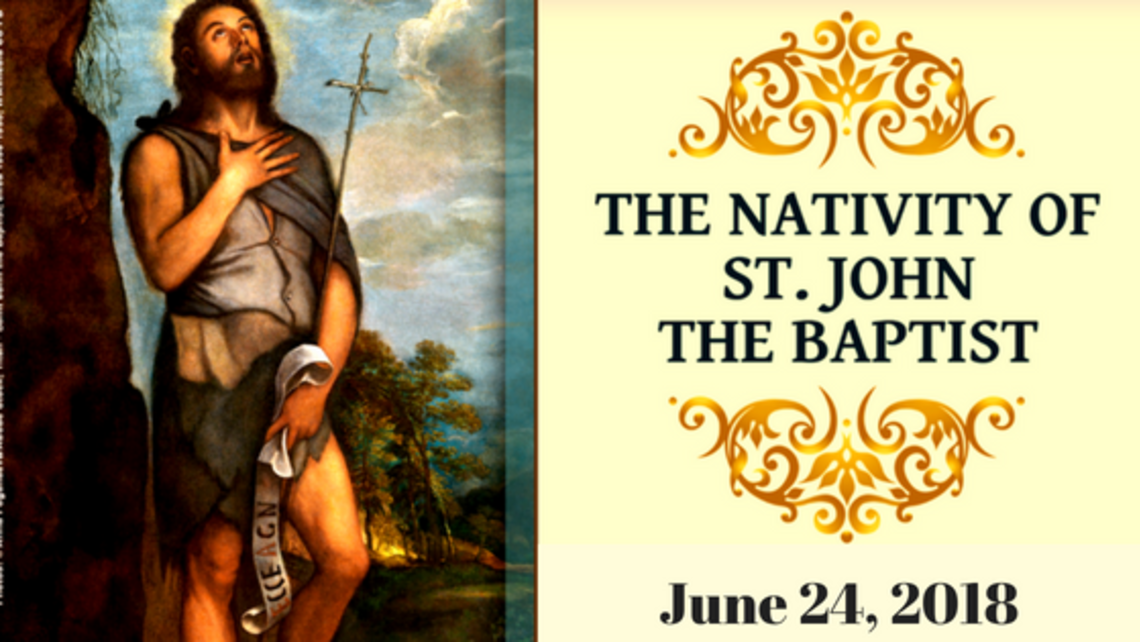 Scripture Reflections for the Nativity of St John the Baptist

This year, the Twelfth Sunday of Ordinary Time coincides with the celebration of the birth of Saint John the Baptist.

Rather than giving us a Gospel Reading from Saint John’s life, the Church gives us the prophecy of his birth to his father Zechariah. John the Baptist was the great prophet in the wilderness (Isaiah 40:3), proclaiming the coming of Christ, and indeed, one could say, the last prophet of the Old Testament, so it is ﬁtting for the Church to turn her gaze toward the theme of prophecy.

The prophets were not fortunetellers - they were messengers. They were chosen by the Lord to remind his people of his existence and that he has a divine plan for them. The prophets were sent to call the Israelites back to their true God when they would begin to worship false idols. The message God entrusted to them was meant to grow a deeper faith in the hearts of God’s people.

But not all of God’s people responded with greater faith. Some were too overcome by fear to surrender in trust to the Lord. Each of us faces this same choice today. When the Lord’s word is spoken in our lives, we can either respond with fear or receptivity. God is always calling us to respond with greater trust and wonder, and he gives us his own Spirit to make it possible.

This passage forms one of the “servant” songs in Isaiah. It is a classic example of a prophecy with multi-layered meaning. Parts of the prophecy are clearly addressed to “Israel,” the chosen people of God (Exodus 4:22). Yet the speaker also uses the ﬁrst-person singular, suggesting that the servant is an individual, possibly Isaiah, possibly someone else. (Compare to Acts 8:34-40) Ultimately, it ﬁnds fulﬁllment in Christ and His Church. Today it is applied specially to John the Baptist, the last and greatest of the Old Testament prophets, allowing us insight into our own prophetic vocation. This prophecy reveals that, despite the sufferings of Israel, they will one day be given restoration. This restoration will come through the servant, who is faithful to God, unlike the Israelite nation: “It is too light a thing that you should be my servant to raise up the tribes of Jacob and to restore the preserved of Israel. I will give you as a light to the nations, that my salvation may reach to the end of the earth” (Isaiah 49:6). Indeed, Isaiah 50:4-9 continues to develop this theme, showing how the servant is a new Moses. This prophecy is foretelling the reign of Christ the King, whose coming will be preceded by John the Baptist, the voice crying out in the wilderness (Isaiah 40:3).

There is the paradox of a hidden witness in this prophecy. The speaker has been called while in the womb, which is a secret place. He is described as a concealed sword and an arrow hidden in the quiver. He himself does not even fully know his mission, as revealed by the lament over his apparent futility. The life of the prophet is mysterious. Despite the darkness, God’s light shines forth through the prophets, and there is an undercurrent of triumph.

Paul is speaking to people in a Jewish synagogue, showing them how Jesus is the fulﬁllment of God’s saving plan. This passage is part of a longer speech, which contains a brief summary of the history of God’s intervention on Israel’s behalf. The story centers on David, the king of Israel, whose reliance on God inaugurated the golden age of Jewish history. This passage makes implicit reference to 2 Samuel 7, in which God promises David that his heir will be given an unending throne. The Jews of Paul’s day did not believe this king had appeared yet, because they were living under the oppression of Roman rule. Paul argues that Jesus is the fulﬁllment of the promise made to David.

After talking about King David, St. Paul discusses John the Baptist, whose testimony serves a dual purpose. John the Baptist is the forerunner of Christ, as revealed in the prophecies, for his mission points to the spiritual dimension of Christ’s life. John makes preparation for Christ by calling the Israelite people to repentance. Because Christ has already come and established his Baptism, Paul’s hearers are prepared to receive the Messiah king who saves them from their sin.

“My brothers…to us this word of salvation has been sent” (Acts 13:26). With these words, the introductory to the message is finished. The next verses will focus on the mystery of the Messiah’s death, and how the Jewish leaders “missed” his coming. Let us ask St. John the Baptist to intercede for us that we may not be distracted from God’s mercy, but recognize his salvation when it is offered.

We do not often ﬁnd extensive details about a prophet’s life in the Scriptures. But, there are some notable exceptions: Moses’s life story is an example of a detailed history, as is the story of the prophet Samuel. In both cases, the person whose life is chronicled is of tremendous signiﬁcance for the Israelites plays an important role in the history of the Israelites. The lives of Moses and Samuel mark turning points in the salvation story: Moses delivers the people from their bondage in Egypt, and Samuel gives the Israelites the king they desire. The names of these leaders reﬂect their origins and their missions: Moses means “to draw out,” and Samuel means “asked of God.”

The process of naming John manifests his prophetic mission, as we heard in the first reading: “from my mother’s womb he gave me my name.” The name John means “God is gracious,” which is a fitting name for a child who is clearly a gift of God. His name illuminates the central theme of John’s message, which is aimed at preparing the people for the greatest gift of all—Christ’s Incarnation and redemption from sin.

Close examination of the Gospel accounts on John the Baptist reveals that every aspect of his life is aimed at making Christ known and loved. Let us pray on this feast for the gift of living lives completely centered on the graciousness of God.

Do you  hear the voice of God in your  everyday life? If so, what is it like? When, where, or how do you usually hear him? If  not, has there ever been a time when you were conﬁdent that the Lord was  speaking to you?

Consider the two annunciations to Zechariah and Mary. Why was Zechariah afraid? What allowed Mary to be receptive?

In your own life, when were you consumed by fear and, as a result, closed your heart to God? When have you been full of faith and opened your heart in receptivity to God?

We love to make examples out of those who have erred and... END_OF_DOCUMENT_TOKEN_TO_BE_REPLACED