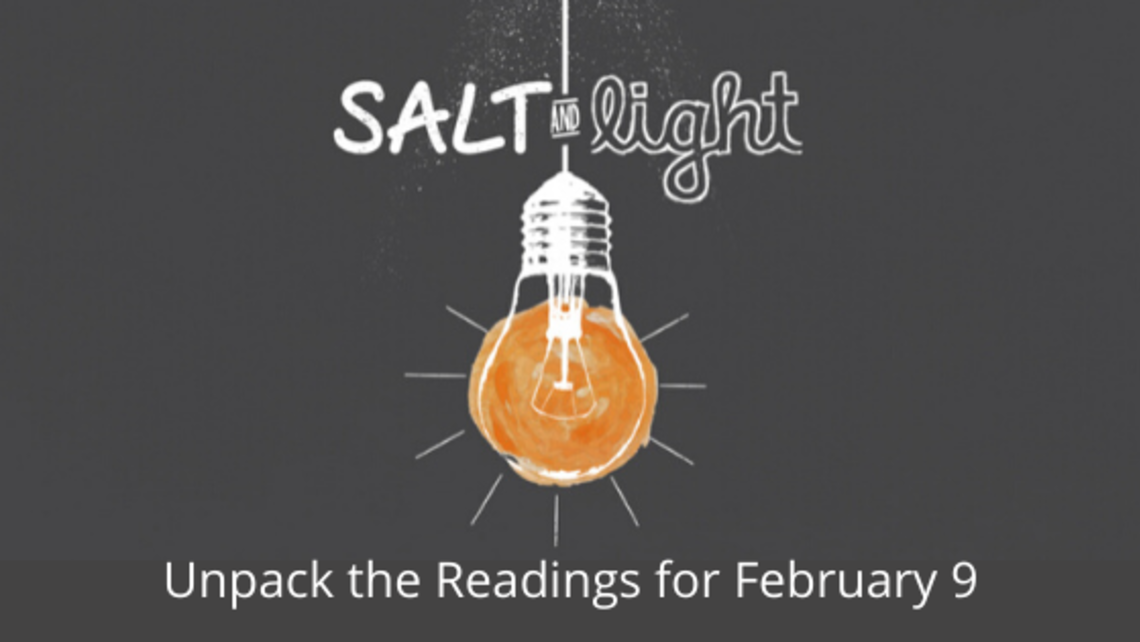 In order to understand what Jesus is telling us in today’s Gospel, we need to consider what salt and light meant in his time.

Because we can buy all the salt we could ever need at our local grocery and we have light anytime we want at the flick of a switch, we may not realize how special both were in ancient Israel. Salt was so valuable it was part of the pay of Roman soldiers. Light came only in the form of fire or small oil lamps. In both cases, salt and light were valuable.

That’s what Jesus is telling us in this week’s Gospel: We must be valuable signs of God’s love and grace for the world. We need to season and preserve the world like salt and illuminate the darkness of sin and despair like a light in the night.

But how do we do that? It’s not enough to just go to Mass each Sunday and then hide out the rest of the week under the barrel of daily life. We have to learn how to take our faith out of the box of the church and bring it into the world. We have to live every moment of our lives as true witnesses to the Faith we have received. This is more than just a good idea. It’s one of Jesus’s basic instructions on how we are to live as children of God.

This passage reminds us that it would be wrong to consider the just or righteous treatment of the less fortunate as simply a penance to be undertaken in the season of Lent. Justice is a constant requirement for all people, whether they have any religious affiliation or not. Feeding the hungry and meeting the needs of the afflicted is always required, even if there were no reward attached to such behavior. Justice ennobles the person who is just by honoring the nobility of others.

Although we should not need a reward for righteousness, our good God has built the universe such that goodness builds upon goodness. He also attaches to just acts a merit beyond their desserts. That’s why Isaiah can say to us that, if we act with justice, our “wound shall be quickly healed.” The wound of sin that we all bear is beyond our healing; but God, in his kindness, has attached reparative value to our good acts so that in Christ we are healed— the whole world is healed—through our small acts of justice.

Paul doesn’t see the success of the Gospel as depending on his actions. Rather, it is the power of God that converts hearts when Paul preaches. We see this proven in that the content of his preaching should have caused it to be rejected! Paul preached that a mocked, beaten, and crucified man is the King of the Universe, the Almighty God! By all measures, Paul's words should not have been accepted; instead, Christianity became the largest religious movement in the history of the world. More than two billion people follow the Crucified One.

Paul tried the standard approach of appealing to the world on its own terms when he addressed the Athenians in Acts 17. We’re told that they were anxious to hear something new, but instead Paul failed to deliver what they were looking for. The whole presentation flopped and resulted in few conversions to the Faith. But the Corinthians did hear something new from Paul; he spoke of “nothing but Jesus Christ and him crucified.” They recognized his preaching as not something new, but the Good News. When speaking about the faith to our own friends, family, and even our fellow Catholics, we ought to be more confident in a simple appeal to the Cross or, more importantly, to him who hung upon it.

In this section from his Sermon  on  the Mount, Jesus reminds us that we are the world’s light, like a city set on a hill. Jerusalem was set upon a hill. The light that a city could cast at night was fantastic to an ancient man or woman—the sheer size of the combined human effort and the common concern for mutual welfare that a city represented made it all the more marvelous.

The city of which Jesus speaks isn’t thrilling for the same reason that New York or Paris are thrilling. The city we are citizens of attracts for much of the same reason as Jerusalem attracted the Jews. On its highest mount, Zion, the Temple drew Jews from all over the world, because there one could experience not the highest things of earth but rather the lowest realms of heaven. As Jesus says in the last line of this passage, we are to attract others by our heavenly goodness and by the praise that we give to our heavenly Father. We are not to desire that others look up to us, but rather that they might join us on that height which is the Church, so that we might both look up together.

In this week’s Opening the Word video, presenter Teresa Tomeo gives us some personal insight into what today’s Gospel means to her and her family. Please watch it at FORMED.org.  Then reflect and discuss these questions with friends and family:

1. What are some ways that you might be able to take your faith beyond the walls of the church?

2. In the Gospel, Jesus gives a specific reason why we must let our light shine before others. What is that reason?

Digging Deeper: A Sprinkle of Salt

The word “salary” comes from the Latin salarium, which was the money paid to a Roman soldier in order to purchase salt. The Romans knew that salt was essential for health, especially for people working (or fighting) in hot climates. Evidence of salt extraction from seawater dates back to prehistoric times.

Invite Someone to Alpha

A very easy, no-pressure way to take your faith beyond the walls of the church is to invite someone to dinner at Alpha on Monday, February 10 at 6:30 pm in the Hall.

Alpha is a series of talks on the basics of Christianity, centered around a free meal and a table discussion.  At Alpha we practice radical hospitality, respecting everyone wherever they are at in their spiritual journey.  Everyone will be allowed to be heard without teaching or correcting.  The first step in the journey to Christ is just feeling welcomed into a community.

Alpha is free, but please register yourself and your guests so that we know how much food to prepare:

Several of them are extraordinarily difficult for... END_OF_DOCUMENT_TOKEN_TO_BE_REPLACED

Lent begins this Wednesday, February 26. The season of Lent is the liturgical season consisting... END_OF_DOCUMENT_TOKEN_TO_BE_REPLACED

The second collection on March 8th will go toward the purchase of backpacks and supplies for families who... END_OF_DOCUMENT_TOKEN_TO_BE_REPLACED