Up Close and Personal with Jesus 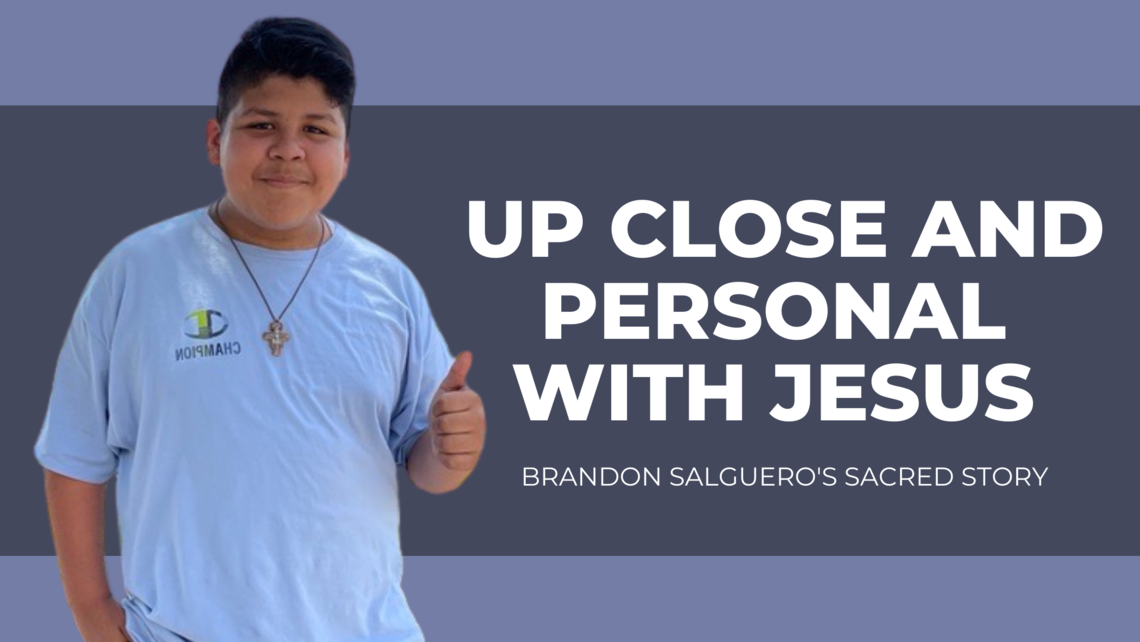 He started as an usher at eight. Now at thirteen, he’s an altar server, loves the privilege of being up-close-and-personal with the Lord, and tells his friends all about it. Here’s his Sacred Story:

How did you become an altar server?

It started when I was four or five years old. My family had been away from Church for a while, but then they went to this retreat. It totally changed their view of God. My parents are a role model to me. So, I decided to follow them. We started praying the rosary together as a family. We started going to Mass. I saw the altar servers, and the ushers who collect money and I wanted to be one of those guys. So, when I was around five or six, I think, I started to lead the rosary before Mass, every Wednesday and Friday.

You led the rosary when you're six years old?

Yeah! There was a picture or video or something on Facebook of me leading the rosary. My mom was really proud, because I was one of the youngest to do that. Then I moved up to Sunday, which was a little bit scarier because there are more people there. Like tons and tons of people! I remember one day, I saw a bunch of ladies taking pictures of me and I was like, “Whoa, what's going on here?”

Then, after a little bit, I started helping the ushers with the collection. And then later, I started watching the altar servers and I was super interested in that. I realized that I couldn't be an altar server because I needed my First Communion. By that time, I had kind of missed the first and second grade class. But there’s this program called RCIC [Rite of Christian Initiation for Children] where you can prepare for sacraments later. So, I did that. And I trained to be an altar server immediately after!

What is the best part about being an altar server?

Well, to be present when the bread and wine become Jesus. Helping the priest and being like right there when it happens, to be so up close, it’s intense. I mean, Jesus calls everyone to His presence, but I get to be there. Right there. I can just feel His Presence and I feel so peaceful and strong in that hour. It feels so calming. I forget about school; I forget about everything that’s on my mind, and I’m just focused. I don’t know how to explain it, other than it's just an amazing thing.

Do you ever get lost in the moment?

Yeah! Sometimes when I'm serving, I will forget one of the tasks. I remember one time I was just in my own world with Jesus, and I forgot to ring the bells.  Father John was there, and he had his hands over the bread, and he said the words. I was so wrapped up in what was happening, that I just stared.  Fr John was looking at me and kind of raising his eyebrows and waiting. So was the other altar server. I was thinking, “Why are they looking at me?” Then I was all OH! The bells!!  [laughing].

Do you tell your friends about your faith?

Yeah. I remember back in elementary school, at Rancho Las Positas, I would tell other kids to pray and to follow God. My mom taught me that (thank you, Mom!) I would share stories that I heard in my family and at church, about doing the right thing, following the good.  I would tell them about Jesus.

How did that go?

Ha! Usually, not great. They would say no and they would get mad and tell me, “Stop it, Brandon, this isn’t church! We're tired of hearing about you!” So, I had to learn how to try and put God into conversations without causing chaos, you know?  I try to pay attention and to listen to where the limits are. But sometimes it does go over well!

I convinced a friend, Fernando, to return to being an altar server.  He kind of stopped Church during the pandemic. I saw him at lunch at school and I said, “You should come back and be an altar server with me. It'd be nice.” He didn’t get mad or anything, but he said he would think about it. Then one day I walked into the sacristy and there he was putting on the vestments!  He said, “Yeah, I’m back.” I was so happy to know that I played a small part in helping someone get closer to God.

Most adults have a hard time sharing their faith! What tips do you have?

I've seen people forcing people into God, like it’s not a free choice thing. That never works. God left us with the choice to follow Him for our salvation. All throughout the Gospels, Jesus invites. He hangs out. He's not gonna force you. He’s not pushy, so we shouldn’t be.  So just invite someone to Church or to pray with you or something. Sometimes I ask friends if they go to church at all, and if they don’t, I tell them where I go. I say, “Maybe I’ll see you there.” Because usually someone would want to go to church if they knew a friend would be there.  A few of my friends haven’t been to Mass for a really long time, but they are starting to come back because they know I’ll be there.

Is it hard to learn to be an altar server?

No, it isn’t.  I recommend just going to Mass a lot and watching what we do.  You can learn a lot from that. Then if you’re ready, there’s a short training program. And you usually get partnered with an experienced altar server at first, until you feel more comfortable. But for me the first few Masses were really terrifying! I felt like all those people in the pews were looking at me and I didn’t want to mess up.  But once you get the hang of it, it’s like a flow. It’s not that hard.

Do you think that maybe you're called to the priesthood?

I've been asked that a lot. I don’t know. Maybe? I'm thinking about it. And then sometimes like it's back and forth, you know? It's like it's a big jumble of things being thrown at me. I like science and math. Sometimes I think I might like being a dermatologist!  But God, He knows our whole lives. He knows what I’m gonna be. He already knows my future, knows every single thing about it, even my deepest, darkest secrets and everything. And He'll know when it's time to let me know.

Do you have any words for someone who’s been away from the Church?

Well, I’d say listen to your parents or some people in your life that are faithful. It’s hard because that’s usually when you don’t want to. But listen to that little voice in your heart. Follow it and see where it goes. Just give it a chance. God’s calling you. He knows what you’re dealing with right now. He’s going to help.

Boys and girls in 4th grade and up who have a desire to serve God at the altar are invited to train to become altar servers. Students must be baptized Catholic, have received First Communion and attend all four training sessions

Altar Servers assist that their preferred Mass as frequently as their schedule allows.

I’m Deacon Eric and my wife, Kathy, and I are new to Livermore and St Michael.... END_OF_DOCUMENT_TOKEN_TO_BE_REPLACED

Here are just a few things your donations have... END_OF_DOCUMENT_TOKEN_TO_BE_REPLACED