Saying YES to the Heart of Jesus 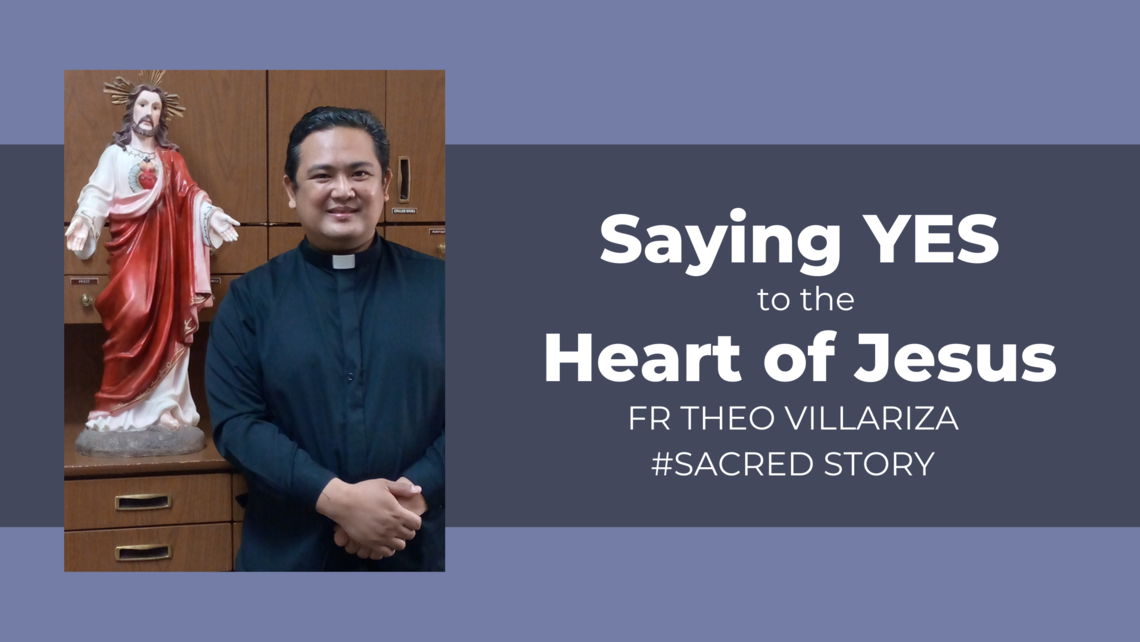 Nurtured in the faith of a loving family, Fr Theo Villariza lived a sheltered and comfortable life steeped in the Catholic culture.

One day during a silent retreat, he envisioned his heart and the wounded Sacred Heart of Jesus becoming one. To make this vision a reality, he knew he must leave his life of comfort and immerse himself in the suffering of others. Here's his Sacred Story:

Fr Theo, what was your "life of comfort" like?

My parents are very religious people, and I grew up in a Catholic culture: we went to Mass, prayed our rosaries, prayed over the sick, and prayed every night before bed. I enjoyed a loving family. My nickname is "Bong," after Ferdinand and Imelda Maros's son called "Bongbong." In a way, I guess I was like my parents' prince!

Then I went to seminary in high school, and it was a fantastic community of brothers who studied, prayed, and played together. It was an enjoyable life. Sheltered but fun. Even after college, I worked at the Archbishop's office, so it was still the same environment. I realized that I had to be a little more adventurous and take some risks at a certain point.

What was your next adventure?

I decided to study in Manila, the capital of the Philippines.  It was indeed a different place! I was on my own, and not everyone spoke the same language. It was an awareness of being part of the country, not just my island. That's when I was introduced to the Ignatian Spirituality, to find God in all things. We were tasked to go out to minister to the urban poor.  It really expanded my walls, you know? To go out in the uncomfortable world where people were really having a hard time.

Wow, you must have leaned on prayer during this time.

That was the beginning of your devotion to the Sacred Heart?

Looking back, I think it was. Later I went to a 30-Day silent Ignatian retreat. Oh, it was really intense! I'm not good about being silent [laughing], and that silence was deafening!  But anyway, one image that stayed with me that I had during contemplation was of two hearts.  In my mind so clearly, I pictured my heart and Jesus' heart overlapping, becoming closer and closer.  It was so captivating that I drew in my journal.  I prayed, "God, may your heart and my heart be one."

That is so beautiful!

Thank you. But then I had to accept that the Sacred Heart of Jesus is always depicted as wounded. I kept asking myself if I would like that kind of life? There is, after all, a very natural human tendency to avoid discomfort. And I don't enjoy pain any more than anyone else!  So I had to really decide on taking this challenge.  I am reminded of constantly taking up the challenge, of this calling to be one with Him in His heart. So, again, I said yes.

In what ways have you united with the wounded heart of Jesus?

Not long after that retreat, I began work with a charity in Mindanao, in the middle of the armed conflict.  So many people, especially children, were displaced. Most of the population were Muslim, so it was very much outside of my comfortable Catholic culture. I was assigned to an integrative emergency health management program for children who were affected.  Evacuees.  I helped prepare food to feed 1200 children every day! We helped with medical needs and psychological assistance too.

That must have been a culture shock!

Yes! I was so naïve!  I ate with Muslims and made the mistake of using the same serving utensil for pork and beef.  They wouldn't eat with me anymore! I was working with the children one day, and I asked them to draw a pig, and they looked at me like I asked them to draw the devil!  I really had to come out of my own perceptions and biases to be immersed in their situation. These people had been uprooted from their homes and had nothing. The women and children were uneducated, and most didn't even know how to read or write. So tragic. It was really a concrete experience of how Jesus grieves with the pains of all people.

Is that when you discovered the direction of your vocation?

Yes, I returned to the seminary and felt more mature. In a way, I had experienced that spirit of surrender by being in touch with some harsh realities. It helped me grow as a person and as a Christian. And then, eventually, I said yes again. I was ordained in 2006 as a priest.

What brought you to Livermore?

I was surprised when my bishop called me and said, "I'm sending you to the US for studies. We need more priests who understand spirituality, especially spiritual directors for other priests." So I didn't really think about it.  Now I am here, studying Christian spirituality at the Jesuit School of Theology in Berkeley.

At first, I didn't see the connection of where God might be leading me with these studies, but it is a little more clear.  The core of the priesthood is conforming our hearts to the heart of Jesus. To be Jesus among His suffering people.  And there is just so, so much suffering. So many people need to experience the love of Jesus.  If I can help other priests unite their hearts to the Lord's heart, then I will be indeed a happy man!

And you love music too. How does that help you in your vocation?

Oh, music is the language of the soul! We can all understand much through music, no matter who you are, our culture, or background. I love to sing, and I play the piano and organ.  My vocation has a soundtrack! I'm very excited to be the new music teacher at St Michael School too.I look forward to the adventure there.

We are so blessed to have you here at St Michael's for the time you are here.

I am happy too.  I will continue to pray for all of you. Please pray for me too!

Stephanie was a competitive cage fighter, caught in a world where her body was like a product to be sold. After losing several... END_OF_DOCUMENT_TOKEN_TO_BE_REPLACED

Catholic culture was the backdrop of her Latin heritage upbringing, including 12 years of Catholic school in San Francisco. When she became an... END_OF_DOCUMENT_TOKEN_TO_BE_REPLACED