Strongest When She Was Weakest 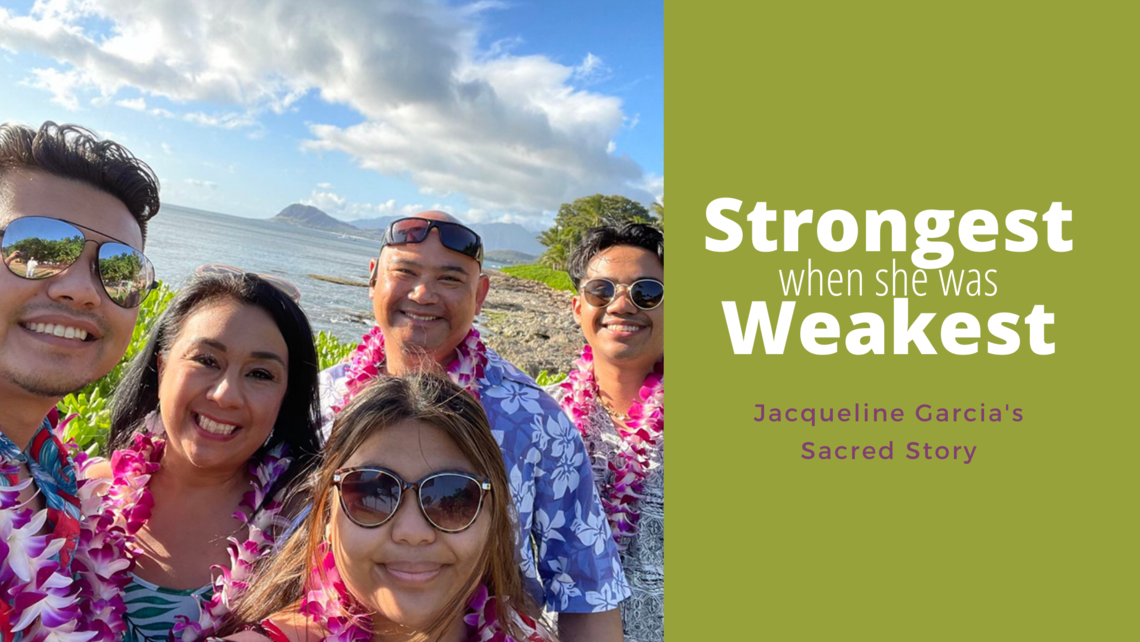 It was the most challenging time of her life, but she also leaned the hardest on her faith. She experienced a closeness with the Lord like never before.

Jacqueline, thanks for sharing your survivor story. Have you always been a prayerful person?

Well, I grew up Catholic and learned my basic prayers: the Our Father, the Hail Mary. I probably didn't pray the Rosary as much as I should have. I didn't really have a dedicated time daily when I would pray.  I didn't have a routine, but prayer was mainly a thing to do during those times when I was going through something.  And in 2006, I went through something.  I was battling breast cancer.  And that's when my prayer life became my whole life.

I wasn't feeling well most of the time.  I couldn't work, and especially the weeks of chemo were the worst.  I was bedridden because I didn't have the strength to deal with anything, and I was so sick and so nauseous.  I would spend nearly all my time praying.  So many people sent me prayer cards or sent me novenas. And that's what I would do from my bed, or from the couch:  I would just pray and read the Bible.

Were you praying in a particular way?

It wasn't like a super conscious discipline. It just became part of my daily life.  It wasn't like I had to stop and tell myself, "Oh, you better go pray." It was more like prayer just integrated into my rhythm, like breathing.  Just organically, on a very personal level, I just felt closer to the Lord than ever. Sometimes I'd be sleeping because I was so weak, and then I'd wake up feeling the need to grab my prayer cards or grab my Bible.  It gave me a sense of peace, and it centered me like nothing else could.

And your kids were little at that time? That must have been extra difficult.

Yeah, they were all in elementary school: first, third and fourth grades. On top of that, my husband had just taken on a new job.  He was in the police academy, so he was gone like 15 hours of the day. My mom was helping me with the kids, and my aunt came from Phoenix and spent some time helping. And so, a lot of my day was just spent resting.

The hardest thing for me was that I felt like I couldn't be there for my kids as much as I wanted it to be. All the little things like getting their breakfast ready in the morning, dropping them off at school, helping them gather their outfits.  But they were so good! They would go pick out their clothes, and then they would come to my bed and show me, and they would say, "Mommy, is this outfit okay?" So the biggest struggle for me was not being able to be involved like I wanted to be. I couldn't be a room mom or go on field trips and that sort of thing. And so, I just felt like I wasn't a strong figure in their lives. I wasn't that someone that they could lean on.

But it sounds like you were there for them, just in a different way?

Yeah, I think so. I mean, kids say the darndest things, right? And they catch on. I remember I was feeling low because I couldn't help my son with a school project.  I didn't say anything to him, but somehow he picked up on it. He said something to the effect of how I was his rock. I can't remember the exact words, but it was almost like the Lord spoke through him. Jesus was reassuring me that my mothering was enough.

Do you think maybe your dedication to prayer was a different way of mothering?

Yes. I remember my youngest, who was in first grade, had to have a root canal. As a mom, I had been used to being with my kids during any type of procedure.  I was so sad and so worried and so scared that I couldn't be there.  I knew they were going to give him anesthesia, and he was going go through it without me. So, my husband had to go, and I was too weak to do anything.  But I insisted on going, but I stayed in the car. I sat there in the parking lot and read the Bible the entire time he was in that dentist office. The crazy thing is that he came out sooner than I thought he would, and he was just fine! The whole procedure was a total breeze!  At that moment, I felt just covered in the Holy Spirit, it made me know that we were doing okay, that it was all going to be okay.

Wow, you really felt the Lord's presence during this time!

Totally.  I think it was because I was so focused on my prayer time and that my connection with God was strongest. I felt Him pouring graces on me.  So, yeah, I really did sense the Lord's presence everywhere. I would often hear the Lord speak to me through other people. You know? Like when someone says something to you at that exact right time that you needed to hear it.  I would recognize it immediately as God's voice.  Even my kids would say things, and I would look at them and go, "Whoa, those words came from God." It was so weird and amazing because I was trying to be strong for them, but they were actually the ones who brought me strength through Jesus.

I also remember a friend called me up to take me to chemo and I said, "I just can't do it. I can't. I don't want to go anymore."  And I just started crying.  And then she just said a couple sentences, and suddenly, I just felt Jesus talking directly to me through her. It gave me that boost of strength that I needed.

It's like your radar was tuned into the Lord!

Yes! I think that’s what constant prayer does. I mean, I was leaning entirely on my faith. I had no other distractions, and I wasn't going to work. I wasn't going out riding my bike or to the gym or going out on the weekends with my girlfriends or anything. And I was sick and weak and often scared. I know it doesn't make sense, but at the worst season of my life, the Lord was with me the most.  I can’t imagine how I could have done it without His grace.

Did you find that you were strengthened physically too?

Well, the chemo made me feel really, really sick. And so physically, I figured I wasn't very strong. Once my chemo was over, and I had finished radiation treatment, my son was in fifth-grade camp.  He really, really wanted me to go. And I was just kind of worried about it because I was still recovering from a lot of serious cancer therapy.  But I decided to go, and I had enough energy to get through the 3-day weekend.  The crazy part was that there was a rock-climbing wall, and everybody was climbing it. There was a bell at the top to ring. My son was like, "Do it, mom! Do it!" And I was like, oh my gosh, I don't think I can.  But I felt God urging me on, I think.  I got on that rock wall, and I climbed it like I was Spiderman! At the top, I rang that bell so hard! I was so shocked at how strong I really was.

Did you keep that strength?

Well, that's the thing. It was even more shocking when I went again the following year when the next kid went to the same camp.  And of course, you know, from one year to the next, I wasn't going through chemo and radiation, and my intense prayer life didn't continue to be at that level. I guess I was returning to everyday stuff, back to work, and distractions.  So there I was back at that rock wall, and my daughter was all, "Okay, mom, I know you climbed the wall last year, and I heard you rang the bell. Let's see you do it again." But I couldn't. I didn't have the same strength. I think that was a message, you know? I kind of related my weakened physical strength to my weakened prayer life. There was definitely a connection.

What would you say to others in a big life challenge?

Just really really lean on your faith.  Try not to worry, but just with confidence, totally surrender to Jesus.  Just trust in the fact that it's all in God's hands, and He really does show up. Sometimes in the most unexpected ways.  And, you know, worrying isn't going to make the situation any better anyway. And I learned that God is really there for us, and he wants to help us, but we just have to ask him.

And the other thing is that I think we get so caught up in just the regular daily life. Sometimes it takes a life crisis to like cut down all the distractions and allow you to really focus on what matters.  Hopefully, not everyone has a cancer battle in the future, but every one of us will have to deal with some big thing, some big challenge, or suffering. I think what I learned is that a big crisis can be the biggest gift, the biggest blessing in a weird way.

Thank you for sharing your beautiful story with us!