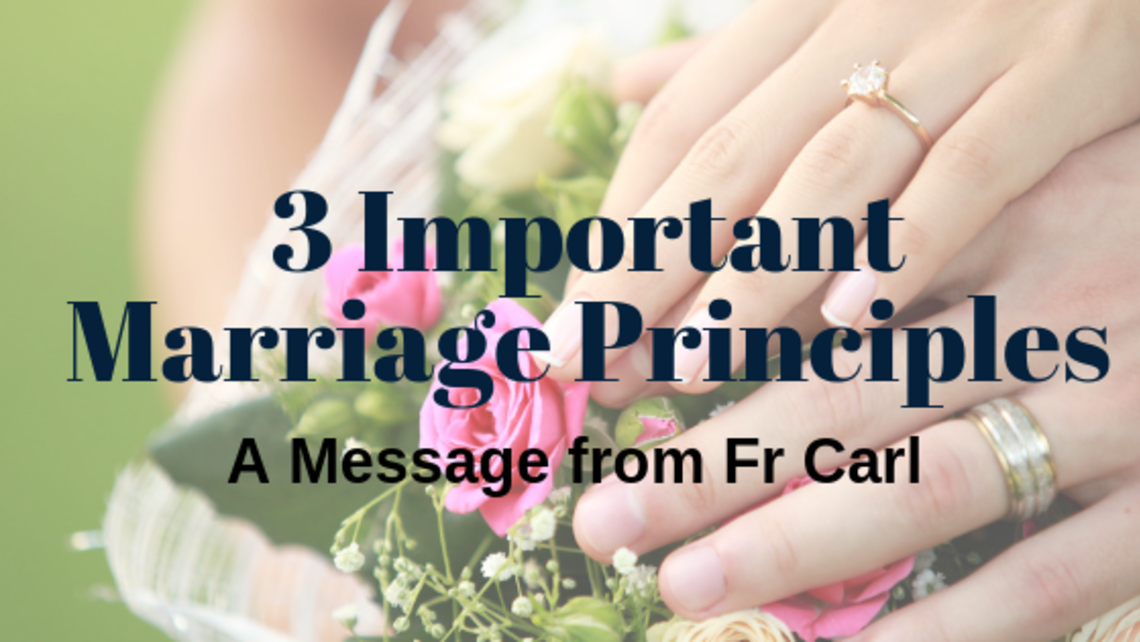 As we continue our catechesis on the Sacrament of Matrimony, let’s look at three important principles of marriage:

1. Marriage Is a Divine Institution Given by God as a Part of the Created Order.

The first principle, seen in Genesis 2, is that marriage is divinely instituted by God as a part of His created order. Marriage was not “figured out” by man; it was instituted by God right from the start. And it is God’s definition that matters, not any later attempts by man to redefine it.

Genesis 2:18 states that “It is not good that man should be alone; I will make him a helper corresponding to him.”  Then Genesis 2:19–20 makes the point that none of the animals qualify as a helper. Therefore, in Genesis 2:21–22 God creates a woman, Eve, out of Adam’s rib. All of this work was God’s initiative and His design from the beginning. Adam had nothing to do with it!

2: Marriage Is the Union of a Man and a Woman to Become One Flesh.

A second principle is seen from the rest of the narrative of Genesis 2, that marriage is the union of a man and a woman to become one flesh. That the woman is fashioned from the man in the first place, indicates that they are of the same essence. In the famous words of Matthew Henry, the woman was “not made out of his head to rule over him, nor out of his feet to be trampled upon by him, but out of his side to be equal with him, under his arm to be protected, and near his heart to be beloved.” Once God makes the woman, he brings her to Adam, who exclaims in Genesis 2:23: “This is now bone of my bones and flesh of my flesh; she shall be called woman because she was taken out of man.”

Even more importantly, the following verse (Genesis 2:24) says that they are “one flesh”: “therefore, a man shall leave his father and mother and be joined to his wife, and they shall become one flesh.” This principle is true both on the physical level, as the man and the woman join in physical intimacy; but it is also true on the spiritual/emotional level, as the two together become one.

3. Marriage is for Life and meant to last for a lifetime. No Divorce.

In the New Testament, Jesus reaffirms this teaching on marriage in his discussion with the Pharisees. When the Pharisees ask Jesus if it is lawful for a man to divorce his wife for any reason, Jesus takes the Pharisees back to these verses in Genesis 1 and 2. He says, “Have you not read that He who made them at the beginning ‘made them male and female,’ and said, ‘For this reason a man shall leave his father and mother and be joined to his wife, and the two shall become one flesh’? So then, they are no longer two but one flesh. Therefore, what God has joined together, let not man separate” (Matthew 19:4–6). Divorce violates the one-flesh principle. That is why later in Matthew 19:9, Jesus says that other than for sexual immorality, a man should not divorce his wife. They are one flesh.

A reminder for couples who were married in the Catholic Church, may these words refresh your commitment and promises you said to God and to your spouse: "I promise to be true to you in good times and in bad, in sickness and in health. I will love you and honor you all the days of my life."

And if you are married and a practicing Catholic, but were not married in the Church, I urge you to seek marriage Convalidation. Essentially, Convalidation makes your civil marriage a sacramental marriage. As with all sacraments, the sacrament of matrimony is a gift of divine grace! All marriages need this special grace from God.  Please, visit StMichaelLivermore.com/Weddings to start the Convalidation process.

May God bless all engaged couples, married couples, and single people discerning God’s will for them.

The great sacraments of the Church—Baptism, Confirmation, the Eucharist, Reconciliation, the Anointing of the Sick, Matrimony, and Holy Orders—have endured for thousands of... END_OF_DOCUMENT_TOKEN_TO_BE_REPLACED

The question on everyone’s mind is “When will St Michael’s be open for public Mass?” The short answer is... END_OF_DOCUMENT_TOKEN_TO_BE_REPLACED