Absolute Joy and Praise to God 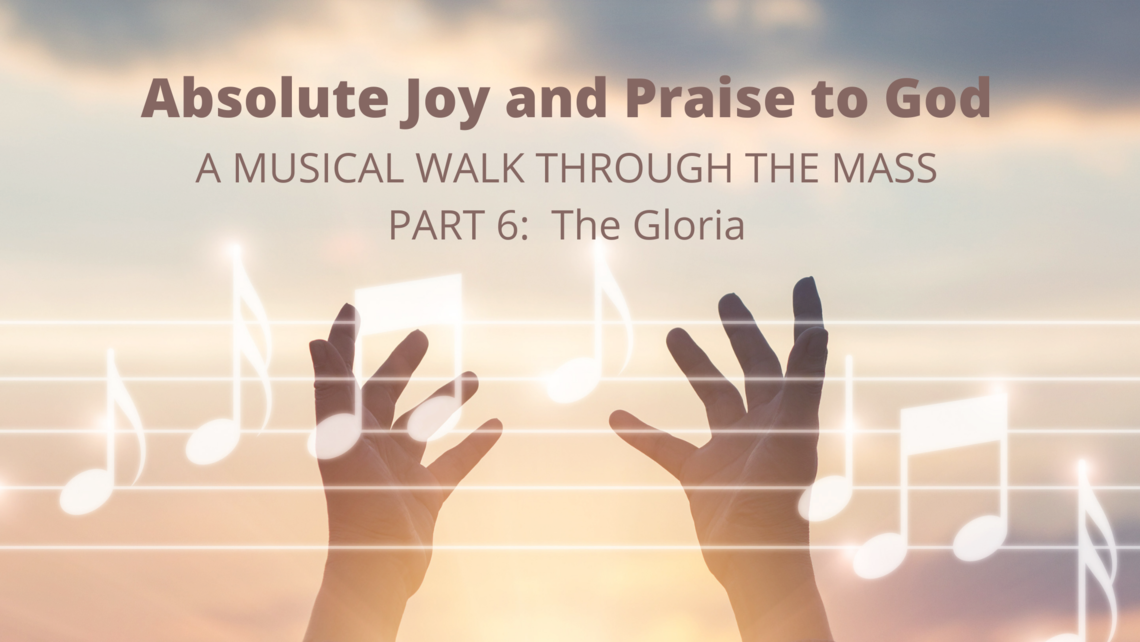 A Musical Walk Through the Mass: The Gloria

The Gloria (sometimes referred to as the “Glory to God”) is a beautiful prayer that we sing toward the beginning of Mass.

It is a reminder for us of our calling to praise and glorify God and allows us to express our praise as a community.

The Gloria is sung on Sundays outside of Advent and Lent, and on solemnities and feasts. The Latin word, Gloria, means “glory” or “glory be given to…”  It is often referred to as “the angelic hymn” and was first intoned by the angels from heaven at the birth of Christ on earth.

The Gloria is actually a prayer that is an ancient hymn with three sections (sometimes considered verses):

The first part is the song that was sung by the heavenly choir of angels at the birth of Jesus (“Glory to God in the Highest and on earth peace to those on whom his favor rests”, Luke 2).

The second part praises God through a five-fold invocation of praise, which emphasizes the majesty of God. “We praise you, we bless you, we adore you, we glorify you, we give you thanks for your great glory!”

We sing the Gloria because it is a song of absolute joy and praise to God – praising God, recognizing the Father as our heavenly King and Jesus as the Lamb of God - what better way to start the Mass then to glorify God!

This week, we begin singing a new version of The Gloria at St. Michael. This version is from the Mass of St. Francis Cabrini. We have been singing the other parts of this Mass setting for several months (the Alleluia, Holy, Mystery of Faith, Amen and Lamb of God). We realize this is new and may take some time to “own”, but we are looking forward to singing it with you as we make it part of our St. Michael’s repertoire.

The Gloria (Glory to God in the Highest)

Glory to God in the highest,
and on earth peace to people of good will.

We praise you,
we bless you,
we adore you,
we glorify you,
we give you thanks for your great glory,
Lord God, Heavenly King,
O God, almighty Father.

You alone are the Most High, Jesus Christ,
with the Holy Spirit,
in the glory of God, the Father.
Amen

Stephanie was a competitive cage fighter, caught in a world where her body was like a product to be sold. After losing several... END_OF_DOCUMENT_TOKEN_TO_BE_REPLACED

Catholic culture was the backdrop of her Latin heritage upbringing, including 12 years of Catholic school in San Francisco. When she became an... END_OF_DOCUMENT_TOKEN_TO_BE_REPLACED