Anointed by the Spirit 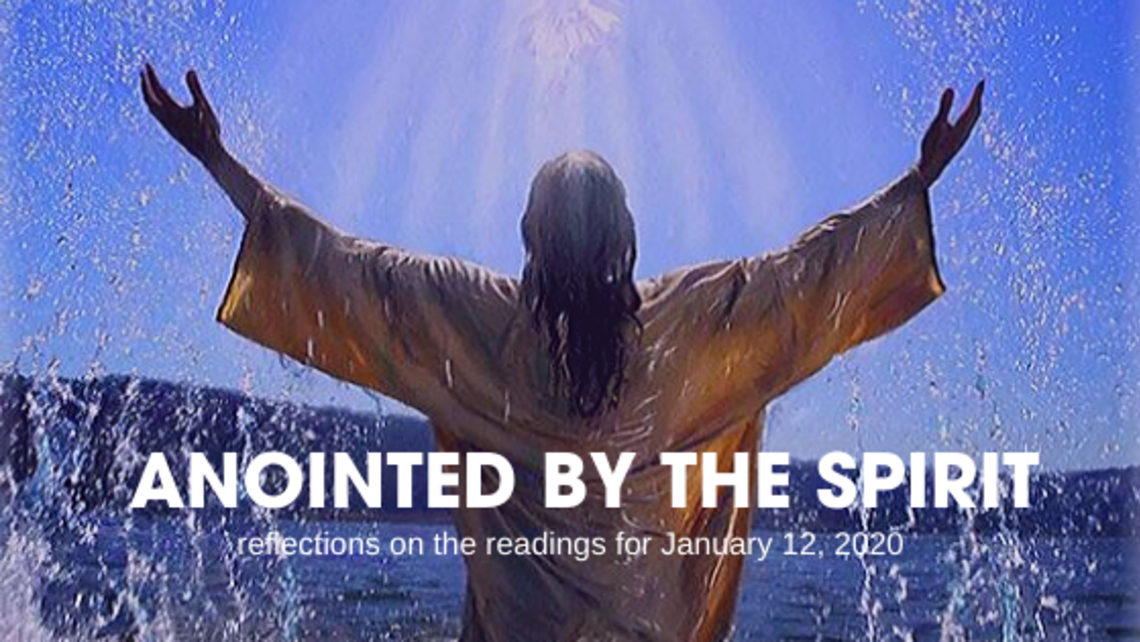 Unpack the Scripture Readings for January 12, 2020

Have you ever considered with whom Jesus spends most of his time?

With whom he enjoys hanging out? Whom  he considers his closest friends? They aren't the so­ called "holy" people, but ordinary sinners like you and me. People who mess up, who need  healing, who can't seem to get their act together.

Why does Jesus want to be with sinners? It's because his whole goal is to fulfill the Father's plan, not by being a messiah in the worldly sense, but by becoming the Messiah who bears all the  consequences  of sin by dying on the  cross. That's  what his mission, his entire reason for becoming man, was all about: to step into the place of sinners. He became a man so that he could know what it was like to be human in order to save humanity.

Jesus had a unique mission, one only he could fulfill. But have you ever stopped to consider that you have a unique mission as well?  One only you can fulfill? It's true. Each of us has been created by God  to carry out  a mission designed for us alone. And  just as Jesus was able to complete his mission through the power of the Holy Spirit, we receive that very same Holy Spirit when we are baptized and confirmed. Through the power of the Spirit given to us in the sacraments, we are anointed to carry out our mission as beloved sons and daughters of the Father.

Here again this Sunday, the prophetic voice announcing the coming of Christ is that of Isaiah, that wonderful book that is sometimes called “the fifth Gospel,” so clear are the prophecies in it of the coming of Christ. As was noted in the study on Isaiah from Epiphany, these servant texts from Isaiah have often been read by Christians as referring both to Israel and the Jewish people and to the coming Messiah of Israel who is to fulfill the role of his people perfectly. In the Gospel reading for this Sunday from Matthew we will see Jesus appear quietly at the Jordan, without clamor, as this text promises, to begin the work of fulfilling Israel’s role of being a “covenant of the people, a light for the nations,” and to bring those in the dungeon of sin out into the light of salvation. Since this reading is given us in the Mass, it is worth noting that, in response to this prophetic text from Isaiah, the Christians of the first centuries would sometimes call the Holy Eucharist that we still receive in Holy Communion simply “the covenant,” to indicate that it was Jesus himself in the Eucharist that we receive, the same Messiah that Isaiah had foretold.

This text from Acts 10 represents a kind of half-way point in the narrative of Luke’s Acts. In this chapter Peter receives the revelation that the Gentiles are to be included in “the Way” (Acts 9:2) that Jesus had instituted. This had already appeared in Acts 9 when a figure named Saul (later Paul) had been told by God that he would “carry my name before the Gentiles” (9:15). Here we see God prepare the Jewish Church for this transition through the leadership of Peter, the first pope. He first receives a vision in Joppa that makes clear that the dietary laws of Judaism, one of the clearest signs of difference between Jews and Gentiles, have been fulfilled in the new revelation in Christ and need not be observed any more: “What God has cleansed, you must not call common” meaning, you must not disallow the consumption of foods which God has now declared acceptable).

Peter, at first perplexed at this, realizes the deeper meaning of this revelation when a Roman centurion (a Gentile, Cornelius) from Caesarea sends for him, so that he might hear Peter’s gospel announcement. When Peter hears that this Gentile had received a revelation to call Peter, just as he had, the deeper meaning of his vision is made clear: “I see that God shows no partiality. Rather, in every nation whoever fears him and acts uprightly is acceptable to him.” Suddenly in the middle of Peter’s announcement of this Good News, the Holy Spirit falls upon these Gentiles as a corroboration of this message!

This wonderful feast of the  Baptism  of the Lord is part of a triptych of mysteries in the mind of the Church. In the Liturgy of the Hours for the celebration of the Epiphany, the antiphon for the Canticle of Mary (for Vespers or Evening Prayer) says, “Three mysteries mark this holy day: today the star leads the Magi to the infant Christ; today water is changed into wine for the wedding feast; today Christ wills to be baptized by John in the river Jordan to bring us salvation.”

That prayer suggests that the mystery of the magi celebrated last Sunday on the Epiphany is continued in another “epiphany” in this feast of the Baptism of the Lord. That word in the Greek means “a showing forth” and the thing shown here is the Christological mystery of our faith, that Jesus is the Incarnate Son of God and the second Person of the Most Holy Trinity. All three divine Persons are present in the tableau that we see both here and in Luke’s gospel, the voice of the Father, the dove as a sign of the Holy Spirit and, of course, the presence of the Son in the waters of the Jordan. This revelation that the one God is a loving communion of three Persons that Jesus came to disclose is what the Catechism calls the “central mystery of Christian faith and life” (CCC 234). By our Baptism we enter that mystery of the Son, overshadowed by the Spirit we become the favored sons and daughters of the Father.

Watch the short Opening the Word video on FORMED.org

What does it mean to you that Jesus healed the sick, gave sight to the blind, and raised the dead both as God and as man?

At our Baptism and Confirmation, we are anointed to carry out a unique mission that can never be fulfilled by anyone. In your journal, write down some ideas about  how  you are fulfilling your mission.

“The unique and altogether singular event of the Incarnation of the Son of God does not mean that Jesus Christ is part God and part man, nor does it imply that he is the result of a confused mixture of the divine and the human. He became truly man while remaining truly God. Jesus Christ is true God and true man. During the first centuries, the Church had to defend and clarify this truth of faith against the heresies that falsified it.” —CCC 464

We focus on providing our... END_OF_DOCUMENT_TOKEN_TO_BE_REPLACED

REPORT ON OUR PARISH FINANCES

We have made tremendous cuts in our parish budget and continue to be wise stewards of our... END_OF_DOCUMENT_TOKEN_TO_BE_REPLACED