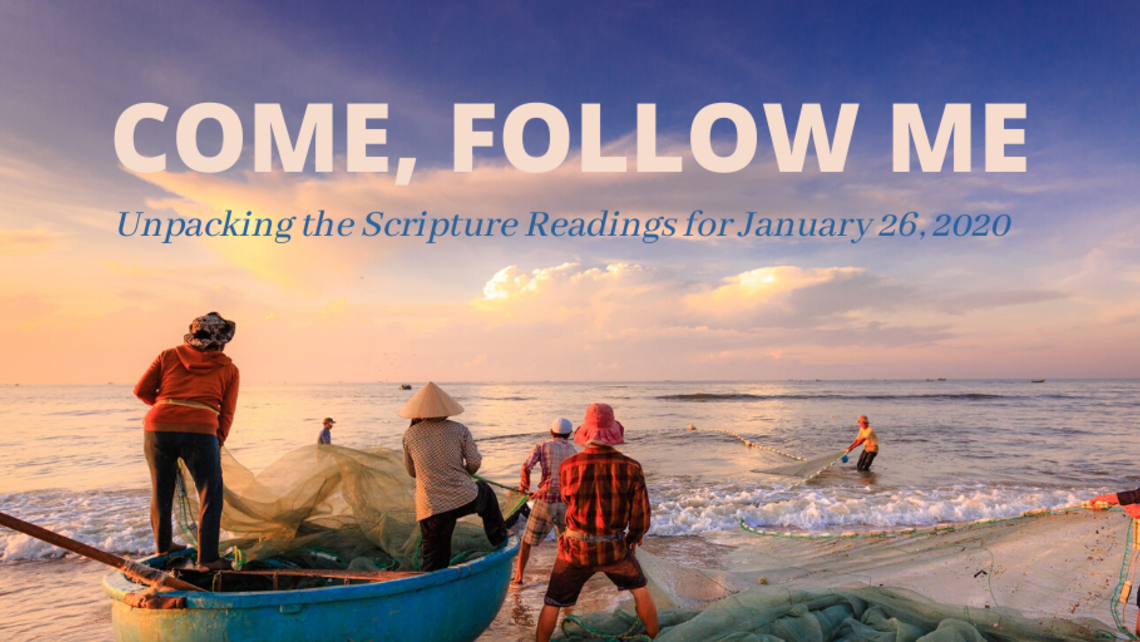 Unpacking the Scripture Readings for January 26, 2020

In today’s Gospel, we see Jesus’s reaction to the news that his cousin John has been arrested: he goes into seclusion back at home in Galilee, maybe for one last visit home with Mary, and then begins gathering the band of followers who will become his apostles.

In Israel at this time, students sought out their teachers, but Jesus reverses that. He calls first Peter and Andrew, and then James and John, saying “Come, follow me.” Apparently his words strike some deep chord, because these rough, work-hardened fishermen put down their nets and immediately go with Jesus. James and John apparently even got out of the boat they were in, leaving their father behind! These men responded to Jesus’s call without hesitation, and their lives, and the history of the world, were changed because of that.

Jesus also calls each one of us. Just as he did on the shore of the Sea of Galilee, he meets us where we are and extends the invitation to follow him. We might think that we don’t have the necessary gifts or talents to do great things for the kingdom, but who would have thought that ordinary fishermen would become the greatest fishers of men?

When we say “yes” to Jesus, when we are willing to drop our nets and turn our lives over to him, he can use us in ways we can’t even imagine. However, we have to be willing to put aside what we think we can do in order to do what God truly wants us to do— just like the fishermen Peter, Andrew, James, and John.

Isaiah delivers words of comfort to the first to fall under the Assyrian conqueror to the effect that they’ll be the first to appreciate God’s deliverance. It’s important to our future study of Matthew to realize that even though the people of Israel will eventually go into exile in Babylon and then return to Jerusalem to rebuild it, Israel is in the throes of a steady decline that will leave her a subject state of stronger nations until the time of Jesus and beyond. In Matthew, Jesus is portrayed as the new Moses, who will lead his people out of exile. His primary mission isn’t to free his people from the domination of foreign oppressors, but to lead his people, a newly reconstituted Israel, out of the exile they suffer due to sin.

The light that shines when Jesus is celebrated as the “light to the nations” is cast here on the people of Israel, who have been subjected to the rule of the Gentiles. As Jesus is revealed to the Gentiles on Epiphany in the heart of Judah, he’s now prophesied in Isaiah as revealed in the “District of the Gentiles,” who’ve overrun the Jews. In this way, even the subjugation of Israel works for the good of the world, as it is from their midst that the light of Christ will shine.

In Christianity, the message is more important than the messenger (the only exception being Jesus himself—both messenger and the message of the Gospel). Despite having gifts that would have guaranteed Paul a prominent position in Jewish society, he sacrificed everything to embrace the very Jesus whom he’d formerly persecuted.

Although God has graced his Church with people of every conceivable kind of talent and temperament, these gifts are for naught if that diversity isn’t united in a common commitment to Christ and his teaching. When all of our diverse gifts are given back to Christ, he directs them through himself in a gift of praise to the Father.

The last phrase in this passage (“that the cross of Christ might not be emptied of its meaning” is one that Pope St. John Paul II has used on several occasions to decry the attempt on the part of some to downplay the seriousness of sin. The one sin that Paul draws into particularly sharp focus for us here is the sin against the unity of the Church. All sin, in some measure, offends against the unity of the Church because it detracts from the witness we’re to give of her holiness.

Our reading begins with the account of what happened after the arrest of John the Baptist. With the decline of John, Jesus’s rise will begin. Next, we see Jesus calling his first disciples, who come immediately from their work and abandon everything to answer his summons.

Jesus begins in Galilee, called Galilee of the Gentiles in Matthew’s version of Isaiah 9:1. That Jesus should begin a “recon-quest” of Israel in the same area where Assyria had begun its conquest of the northern kingdom 750 years earlier is significant—particularly since the ten northern tribes had ceased to exist for all practical purposes. This is just the first of many signals in Matthew’s Gospel that Jesus has come to reconstitute Israel. His choice of twelve apostles, who he says will judge the twelve tribes of Israel, is the clearest indication of this (Matt

The journey from Galilee to Jerusalem will have its counterpart in the life of the Church when the disciples are told to return to Galilee from Jerusalem after the Resurrection for a meeting with the risen Lord and as a prelude to their own ministry of proclaiming the Gospel. Matthew’s Gospel describes a circuit which is closed at its end but opens onto the future of the Church as well.

As you watch the short Opening the Word video on FORMED.org on the beginning of Jesus’s ministry, think about what it might have meant to the first disciples to hear the words “Come, follow me.”

Reflect and discuss these questions with a friend:

What would it take for you to leave your “fishing nets” and follow the Lord with your whole heart?

The Assyrian Empire was located in the middle of four modern countries: Syria, Turkey, Iran, and Iraq. The word Assyria comes from the phrase “mât Aššur,” which means "the country of the god Aššur,” the princi-pal god worshipped by the people. One of the greatest empires of ancient times, Assyria was conquered by the Babylonians in 612 BC.

Thank you for your generous support of our parish.

It is because of you that we can continue to provide for the... END_OF_DOCUMENT_TOKEN_TO_BE_REPLACED

Every year during the month of January, our Diocese takes up a second collection to... END_OF_DOCUMENT_TOKEN_TO_BE_REPLACED