Come Before the King 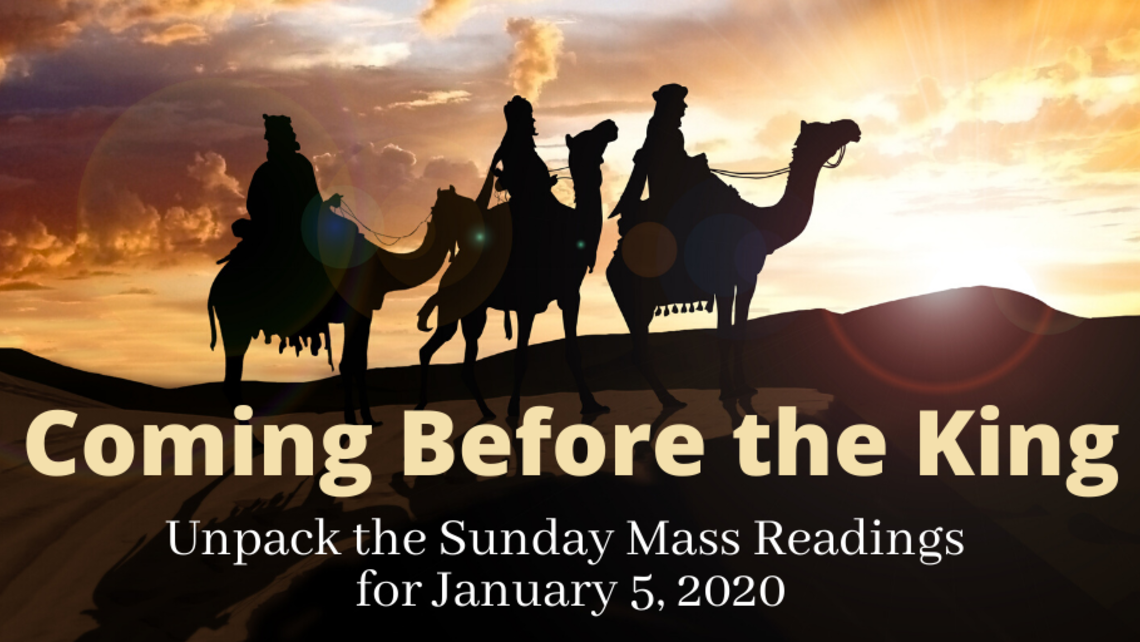 The story of the magi, the three wise men, who traveled from the East to pay homage to Jesus as the King of the Jews, is part of our Christmas tradition.

(Incidentally, the Gospels never tell us that there were three; we get that number from the three gifts they brought, by assuming each brought one gift.) The magi, after a detour to see King Herod, brought their most valuable possessions to lay at the feet of the newborn King.

As we see the scene unfold, it doesn’t look much like a royal court. It simply looks like a father, mother, and child, living in humble circumstances in a tiny, backwater town in a rural province of Rome. And yet, it was there that the magi encountered the King of all creation.

In some ways, it can be the same for us at church. When we attend Mass, it can seem ordinary, almost mundane, because we do it week after week. We may even find our minds drifting to the things we are going to do when we get home instead of the fact that we are in the presence of the Lord of the Universe.

The early Church Fathers encouraged Christians at Mass to meditate on the magi. It’s a good lesson for us, as well. When we think about the magi approaching the Infant Jesus, we can take that same image to prayer in our lives. As we approach the Eucharist, we can see ourselves coming before the Lord, offering our most precious possession—our very lives—as we worship and adore him as the magi did those thousands of years ago.

This part of the book of the Prophet Isaiah is traditionally believed to be part of the prophecy of the restoration and rebuilding of Jerusalem after the exile in Babylon. But two verses before the start of this reading, at Isaiah 59:20, we read, “And he will come to Zion as Redeemer, to those in Jacob who turn from transgressions, says the Lord.” So, for reasons that are obvious to Christian eyes, these verses have also been seen as prophecies of the future Redeemer, Jesus Christ, who seems to be so clearly portrayed in the earlier chapters as the servant of Yahweh, an exalted figure who is nevertheless to be despised and betrayed “like a lamb that is led to the slaughter” (Is 53:7). Prophecies appear as well in the chapter that follows this one, which speaks so clearly of the Anointed One of the Lord, who is “to bring good tidings to the afflicted” (Is 61:1).

In this particular portion from Isaiah 60, the clear reference to “gold and frankincense” in verse 6 has always been seen asfulfilled in the Gospel passage we have on this Sunday from Matthew, relating the gifts of the magi. The multiple layers of prophecy in Scripture remind us that God’s Word is rich in mysteries, and a limitless source of gold for the soul who, like the wise men, seeks to pay homage to the infant King of Bethlehem. Similar prophecies can be seen in Isaiah that can be applied to Israel's return from exile and the role that the Jewish people are to play in preparing the nations for the Messiah, as well as the arrival of the Christ himself. Later, in Revelation 21:2, St. John prophesies the eventual blessing of the new heavenly Jerusalem.

The feast of Epiphany stresses the revelation of the Christ to the Gentiles, as represented by the wise men, or three kings, as they are sometimes called. In this second reading St. Paul, who wrote this letter to the Galatians before Matthew's Gospel, tells us that God also revealed to him directly that he had a “plan” for the Gentiles. This mysterious plan had already been hinted at in prophets like Isaiah. Note that our first reading spoke of the nations and their kings being drawn to the light cast by God upon the Jewish people. But the idea that the non-Jewish nations would be offered full covenant inclusion as co-heirs with the Jews themselves was unheard of, a mystery hidden from the world until the fullness of God's plan had been disclosed in Christ.

St. Paul is reminding the members of the largely Gentile Church in Ephesus of this spectacular surprise, that Jews and Gentiles have been mystically incorporated into the one body of Christ, made members of each other by this special grace. The Catholic Church is universal, the effect of the desire of God to unite every human heart to himself and simultaneously us all with each other in one worldwide family of God!

In the first chapter of Venerable Fulton Sheen's wonderful Life of Christ, titled “The Only Person Ever Pre-Announced,” he describes the wealth of prophecies of the coming of Christ, not just in the Old Testament, but also from cultures all over the ancient world. He cites the Romans: Tacitus, Suetonius, Cicero, and Virgil. He cites evocative texts from the Greeks-- from Aeschylus and the Sibyls, and points to the longing of Socrates and Plato for the Logos. He notes a remarkable story from The Annals of the Celestial Kingdom recounting that an emperor of the Tcheou dynasty in China saw a remarkable star in the southwest and inquired of his sages what this might mean: “They showed him books in which this prodigy signified the appearance of the great Saint of the West whose religion was to be introduced into their country.” And this explains how the wise men in Matthew's Gospel knew to follow the star that led them to Bethlehem. Not only had the Jewish prophecies and the texts that carried them penetrated into the Persian and Babylonian cultures from which these men likely came, but it also seems the whole world was pregnant with longing for the wisdom of God and for release from sin. Jesus satisfies both longings.

That ancient world was ripe for harvest, as we know. The whole of the Greco-Roman world was won for Christ in a remarkably short time, especially given the slowness of communication in that day. But our postmodern world we live in has grown tired of God and his truth. It believes that it has outgrown the wisdom of the ages. We live in a world that longs for novelty. Each year the liturgy reminds us, by telling this story of the newborn King, that what the world claims is outdated is, in fact, ever new.

Today’s Gospel concludes what we think of as the “Christmas story” with the arrival of the magi. Please listen to this Sunday's Opening the Word video available free for parishioners on FORMED.org.  The presenter gives us some ideas on what this can mean to us today. Then reflect and discuss these questions with a friend:

King Herod was born about 74 BC, the son of a high-ranking Edomite official. Although he may have practiced Judaism, he was not of Jewish descent. He was appointed the governor of Judea when he was 25 and elected “king of the Jews” by the Roman Senate a few years later. He ruled Judea for 37 years with cruelty, even killing his own wife and children.

Phase 1 of our Asphalt Maintenance Project was repairing and restoring our church parking lot. We are happy to... END_OF_DOCUMENT_TOKEN_TO_BE_REPLACED