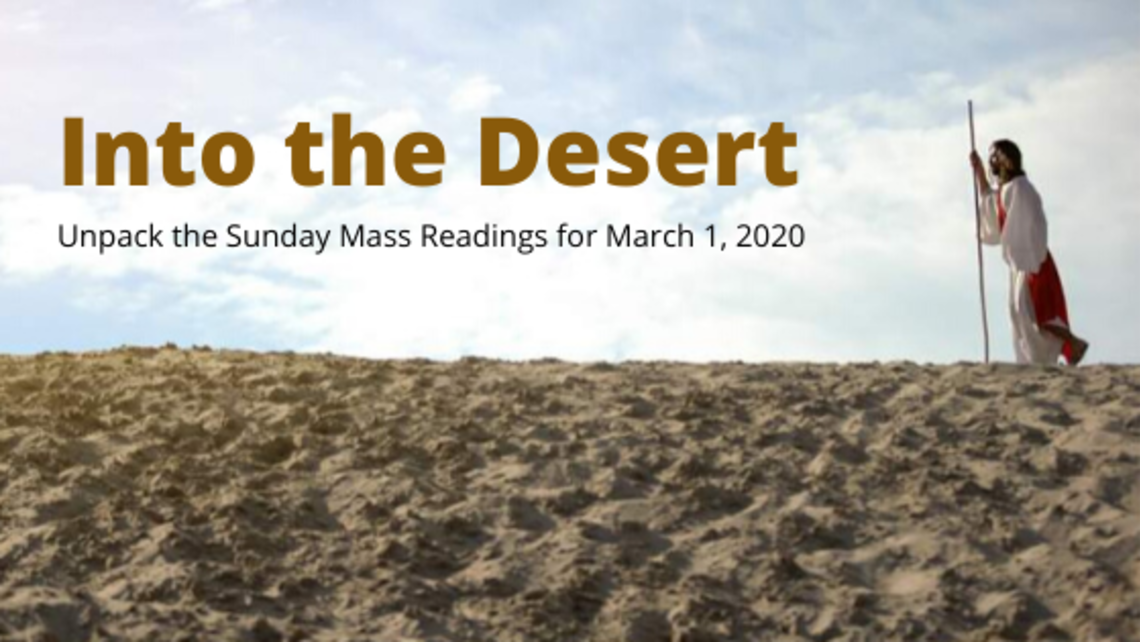 Unpacking the Mass Readings for March 1, 2020

We begin our Lenten readings in a most appropriate place: the desert.

In the desert, life is stripped to basics and everything, including our weakness, is exposed. We are forced to stand alone and vulnerable before God.

Our faith is put to the test. Little wonder, then, that Jesus went to the desert to fast and pray before plunging into his public works. It’s there, amid the rocks and reptiles, that the devil comes to him with three temptations. When we read about the temptations, it’s easy for us to dismiss them as having no relevance to our own lives. When was the last time you were tempted to change stones to bread, for instance?

While the specifics of the temptations don’t resonate with us, the lure of pushing God aside, of making him secondary in our lives, lies at their heart—and that is a common temptation for all of us. For example, when we struggle with daily concerns of how to pay our bills or provide for our families, we are tempted to turn from God’s way and pursue our own path. That’s, in a sense, what the devil was suggesting to Jesus when he told him to turn stones to bread.

The same is true with the other two temptations. The devil was urging Jesus to prove his divinity by jumping off a building. We often want God to prove he is God by giving us exactly what we want, when we want it. And just as the devil tempted Jesus with the glory and power of this world, so he tempts us, deep down, to crave power, wealth, and fame and the lifestyle they provide. We are drawn to the ways of the world and both covertly and overtly deny our faith if we think we can get away with it.

This Lent, we are called to remember the primacy of God and to turn to him in our moments of weakness and need.

It is fitting that on the First Sunday of Lent we hear about the first sin of mankind. Adam and Eve exhibit shame and try to avoid God’s presence after they eat the forbidden fruit. But within eight verses of the story of the Fall, we see the fruit of that first sin in the murder of Abel by Cain. The whole flow of the Old Testament describes the consequences  of the Fall. The repeated interventions by God in human history are explicitly aimed at rectifying the subsequent disobedience and sin and building a renewed relationship between God and Israel and amongst the Israelites themselves through what’s called the Covenant. It was this sense that something was amiss that gave rise to the messianic longings of the people of Israel. The people had to be delivered, even if they weren’t quite sure what to call the thing that oppressed them.

So we struggle with sin as sons and daughters of Adam and Eve. That struggle didn’t end with the coming of Christ. Although God has promised us the grace to combat sin in our lives, we’re still Israel, a name which means “struggle.” Lent is that time during the liturgical year when we take up that struggle with special earnestness.

St Paul’s correlation between Adam and Christ  is  far more than just a description of the mechanics of salvation (i.e., Adam broke it and Jesus fixed it). St. Paul’s experience of the risen Lord on the road to Damascus apparently set working in him a complete reassessment of the whole of biblical history in light of the remarkable event which was Christ. Once he recognized Christ as the fulfillment of his Judaism, Paul began to see Christ everywhere in the Old Testament.

That tendency to read the Old Testament in the light of Christ is something that the Church has done ever since. Those associations are made particularly in the liturgy which pairs the readings from the two Testaments to draw parallels between Christ and the figures and events from Israel’s history. In the liturgy we, too, are incorporated into that unification of all things in Christ that St. Paul recognized as the center of the Good News. We repeat and share in the trials and triumphs of the Old Testament from Adam to Ezra as we read those stories and then apply to ourselves the victory of Christ over sin through the sacraments he left us.

Mathew is intent on  showing  us that Jesus is the fulfillment of Jewish hopes and prophecy. And the Church has specifically paired our first reading and this Gospel passage to highlight certain parallels between the Old and New Testaments. The most obvious is that both are temptation scenes: the first successful (Adam and Eve), and the second unsuccessful (Jesus defeats Satan). But if we look a little closer, we can see another close parallel.

Both Eve and Jesus are tempted with food, death, and power. This threefold temptation bests Eve in the absence of Adam. But in the second temptation, the new Adam is the subject of the temptation and the future Eve, the Church, is at a safe distance. Interestingly, in chapters 26, 27, and 28 of Matthew, Jesus will successfully give food to his followers in the Eucharist, will go to his death on the Cross, and receive power from the Father in his Resurrection. What Jesus refused to the devil at the beginning of Matthew’s Gospel, he gives freely at the end of his Gospel. Ironically, what Satan promised to Eve and could not deliver, Jesus offers freely to the new Eve, the Church, in the Paschal Mystery.

In this week's Opening the Word video (available free on FORMED.org), we will see how the temptations of Jesus are really the same kind of temptations we all face. You may want to take some notes on what the presenter is saying for your discussion.

Before Advent, there lies before us the Solemnity of Christ... END_OF_DOCUMENT_TOKEN_TO_BE_REPLACED

What will our Thanksgiving, Advent and Christmas be this year? With the continued rise of COVID-19 infections still casting... END_OF_DOCUMENT_TOKEN_TO_BE_REPLACED