Do You Love Me? 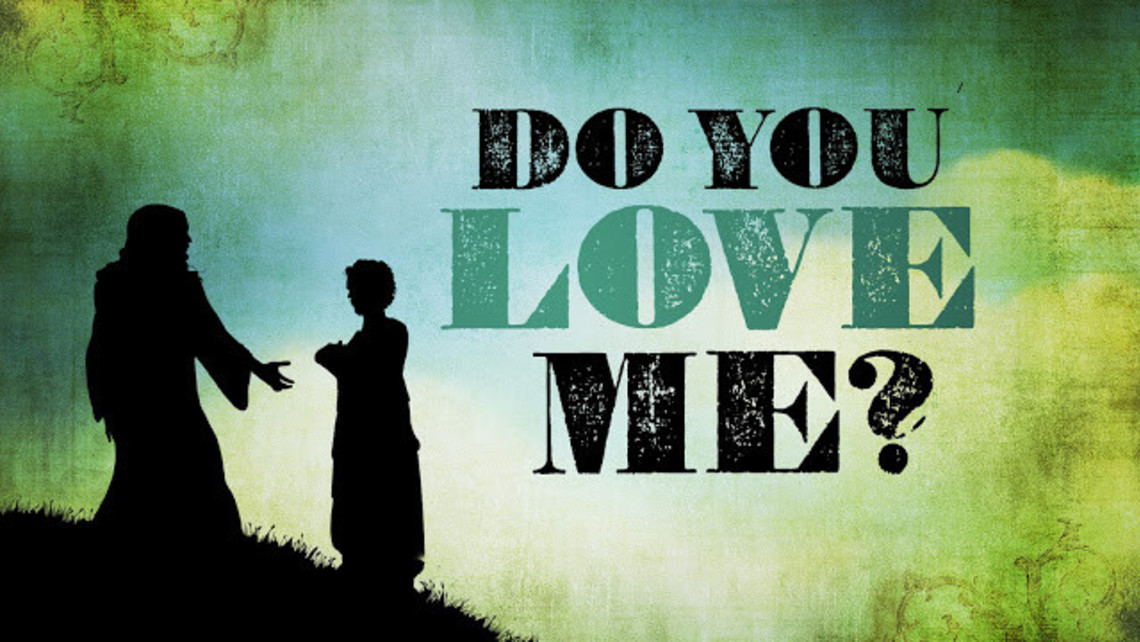 Today’s Gospel reading zooms in on an intimate conversation between Jesus and Peter.

Not long before this, at the Passion, Peter had denied Jesus three times. Now the risen Lord asks Peter three times, “Do you love me?” What’s particularly interesting about this scene is the language that Jesus and Peter use. When the Lord asks Peter, “Do you love me?” he uses the Greek word “agape,” which refers to an unconditional, sacrificial, self-giving love; the deepest love you can imagine. Surprisingly, Peter answers, “Yes, Lord, you know that I love you,” but instead of “agape,” he uses the Greek word “philia,” which refers to a friendship; it’s not quite the same depth of love as “agape.”

Clearly, Peter is not ready to give all that Jesus is asking for, but today’s readings are all about God’s willingness to take whatever we’re willing to give him and work with it. In the first reading this week, taken from the Acts of the Apostles, we see that Peter eventually does become willing to give his whole life for the risen Lord. This Sunday’s readings challenge us to consider what our response would be to Jesus’ question: “Do you ‘agape’ me?”

In the joy the apostles felt in being found “worthy” to suffer for Jesus, we see most clearly the way in which Jesus turned the world upside down. In Jesus, everything that men and women had sought to avoid from the beginning of time had become a mark of one’s solidarity with the suffering Christ. What a wonderful place the world has become since Jesus has turned even the worst things into a cause for joy.

The cause of this joy is “the Name.” The name, of course, is that of Jesus. The Jews wouldn’t speak the holy name of God and so spelled it Y-H-W-H (without vowels) to inhibit pronunciation. The oldest papyrus fragments of the Gospel of Matthew, recently dated to between 30 and 70 A.D., abbreviate the name Jesus using the letters I-S, apparently in imitation of the Jewish practice. This could suggest that “the Name,” as we find it referred to in the Book of Acts, may have also been a way of referring to Jesus without pronouncing his holy name. Whether or not that’s the case, it’s inspiring to realize that even the earliest Christians recognized and tried to express Jesus’ divinity. Only God could turn the world upside down in the way Jesus did.

What we see in this week’s reading is one of the many instances of heavenly worship in the book of Revelation. The assembly consists in this case of countless thousands of angels, elders, and four living creatures. The elders’ number twenty-four and likely represent the twelve tribes of Israel and Israel reconstituted in the twelve apostles. The four beasts resemble those found in Ezekiel’s vision and have traditionally been interpreted as the four angelic spirits who govern the earth. The number four represented for the Jews, as for many ancient cultures, the world. The four images used (a lion, an ox, a man, and an eagle) are also used as symbols of the four Gospels.

The fundamental point of St. John’s Revelation is that prayer is the most important thing in the world. Everything that participates in the ebb and flow of history is tied to prayer. Through prayer we link ourselves to the absolutely sovereign will of God and his divine plan. In the end, the whole of the cosmos will participate in one great acclamation of praise for all God has done. It’s vital that we understand that when we participate in the Liturgy, we’re engaging in the most important thing we’ll ever do. On our worship depends the fate of nations and peoples, the whole of world history.

Ronald Knox, in his commentary on this section of the Gospel of John, seems to suggest that a lot of strain has been placed on this passage in trying to make it say things of mystical or sacramental significance that the text doesn’t necessarily indicate. It’s true that there’s a very warm (what he calls “pastoral”) feeling about this final scene of the Gospel story. The end of the Gospels signals the beginning of everything else, the rest of time and the whole of eternity.

Certainly, one should consider all the significance of Jesus asking Peter to undo his threefold betrayal with a threefold profession of love. Certainly, it’s important that Peter’s first experience of Jesus’ Lordship and his own sinfulness occurred in very similar circumstances (Luke 5:8). But Knox is certainly right, too, in pointing out that this seems to be one of those scenes that are particularly appropriate for restful, joyful meditation. In its haunting simplicity, it tells us more about the Resurrection than could any catechism or theology text.

With family, friends or in your small group, watch the short Opening the Word video on FORMED.org.  Then reflect on the following questions:

In the Gospel reading, according to the presenter, why does Peter use a different term for the word “love” than Jesus does?

Why does Jesus ask Peter three times if he loves him? What in the Gospel story might this be related to?

This week’s first reading from the Acts of the Apostles shows us that Peter eventually gave Jesus “agape” love. How can Jesus transform the small things we are able to give him into great things?

The Power of Divine Love

“Prior to the experience of betrayal, the Apostle [Peter] certainly would have said: ‘I love you (agapo-se) unconditionally.’ Now that he has known the bitter sadness of infidelity, the drama of his own weakness, he says with humility: ‘Lord; you know that I love you (filo-se),’ that is, ‘I love you with my poor human love.’ Christ insists: ‘Simon, do you love me with this total love that I want?’ And Peter repeats the response of his humble human love: ‘Kyrie, filo-se,’ ‘Lord, I love you as I am able to love you,’ The third time Jesus only says to Simon: ‘Fileis- me?’ ‘Do you love me?’ “Simon understands that his poor love is enough for Jesus, it is the only one of which he is capable, nonetheless he is grieved that the Lord spoke to him in this way. He thus replies: ‘Lord, you know everything; you know that I love you (filo-se).’

“This is to say that Jesus has put himself on the level of Peter, rather than Peter on Jesus’ level! … From the naïve enthusiasm of initial acceptance, passing though the sorrowful experience of denial and the weeping of conversion, Peter succeeded in entrusting himself to that Jesus who adapted himself to his poor capacity of love. And in this way he shows us the way, notwithstanding all of our weakness. We know that Jesus adapts himself to this weakness of ours.”

Reprinted from this week’s Opening the Word leader materials with permission from Augustine Institute.

Candelario Jimenez is one of our own St Michael parishioners who is a Theology IV seminarian at St Patrick Seminary in Menlo Park.... END_OF_DOCUMENT_TOKEN_TO_BE_REPLACED

Fr Nathaniel Gentizon (Father “Nat”) joins our St Michael Community and will stay with us through mid August.

He is a Filipino... END_OF_DOCUMENT_TOKEN_TO_BE_REPLACED

Based on the guidelines by Bishop Michael Barber, this new schedule is effective... END_OF_DOCUMENT_TOKEN_TO_BE_REPLACED