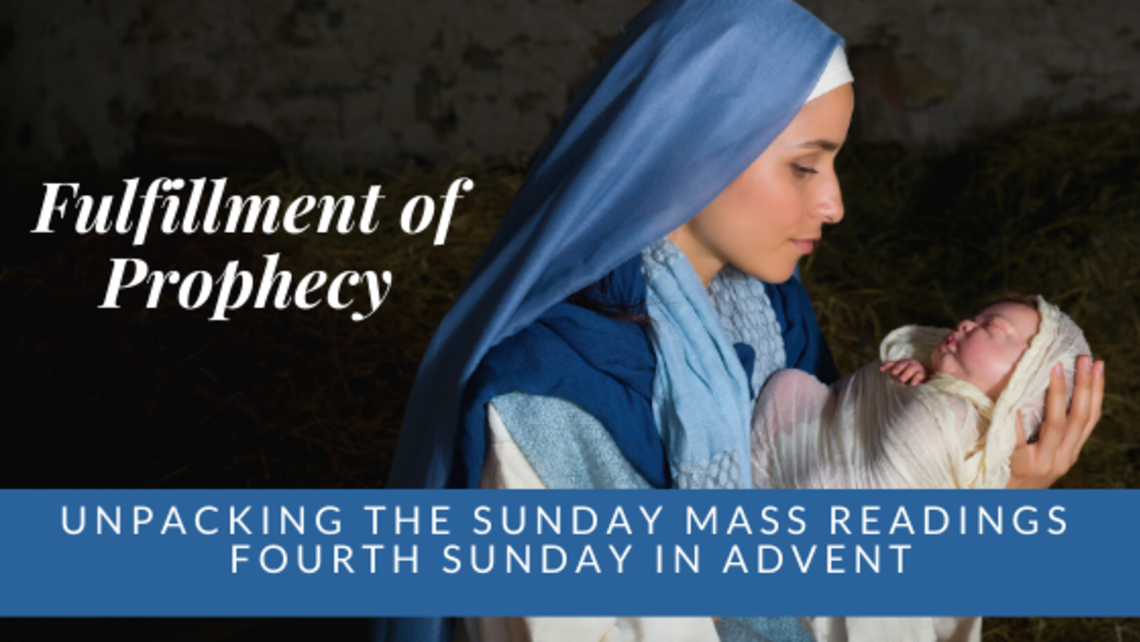 Unpacking the Sunday Mass Readings for the Fourth Sunday in Advent

This week’s Gospel tells us how the “birth of Jesus Christ came about.”

More specifically, it tells us how an angel appeared to Joseph, explaining to him that Mary’s son would save the people from their sins. While Joseph might not have understood it at the time, we know that Jesus is the fulfillment of the great prophecy of Isaiah 7:14ff, that the Messiah would come from the line of David and be born of a Virgin. In our readings this week, we first read that prophecy and then see its fulfillment in the Gospel.

While today’s reading focuses on Joseph, Mary is also present. It is because of her, and her willingness to do God’s will by accepting the responsibility of bearing his Son, that our sins can be forgiven. But we cannot overlook Joseph’s role either. As the Gospel tells us, he did as the angel of the Lord commanded—taking Mary to be his wife and accepting his responsibility toward the child in her womb.

As we examine both Mary's and Joseph’s responses to the Lord, we are shown two examples of the way that we, as Christians, are to be open to the Lord’s movement in our own lives. Mary, the spotless virgin, readied a place in her body for the coming of  the Messiah. We, too, can prepare a place for him in our hearts. Joseph, the faithful husband, accepted what he did not understand and trusted that the Lord was at work. Inspired by his example, we who often can’t understand what is happening to us can learn to trust more that the Lord is truly working in our lives.

With only a few days left before we celebrate the coming of the Lord at Christmas, let us take this time to ask both Mary and Joseph to help us truly “prepare the way of the Lord” in our hearts, our minds, and our souls.

Much has been said about this passage from Isaiah regarding its original significance in the time and place in which it was written. Although modern scholars have noted that the Hebrew term translated as “virgin” (almah) isn’t the technical word for virgin—the word means a young woman of marriageable age—such a woman would ordinarily be understood to be a virgin. This understanding is reflected in the Septuagint, the ancient Greek version of the Old Testament, which uses the term parthenos—a word that ordinarily means "virgin."

The tradition of the Church is unanimous that Mary and her virginal conception fulfill this passage from Isaiah the prophet. In Matthew 1:22–23, the Evangelist, working under the direct inspiration of the Holy Spirit, cites this passage from Isaiah and declares that it was fulfilled in the announcement of the birth of Jesus made to St. Joseph by an angel. It wasn’t until the mid-eighteenth century that the Magisterium (Pius VI had to condemn an interpretation to the contrary.

The Vatican II document Lumen Gentium also identifies the young woman spoken of in Isaiah 7 as the Virgin Mary and makes a further connection with “the woman” mentioned in Genesis 3:15 who would ensure the victory over the serpent (LG, 55). Without any other credible candidates for almah and in the face of the consistent teaching of the Scripture and the Church, we can feel utterly confident that the woman prophesied is indeed Mary, Mother of Immanuel.

St. Paul provides a wonderful link between the first reading from the Old Testament and the Gospel reading. On this Fourth Sunday of Advent, we stand at the very cusp of the event that we call the Incarnation, which is fully disclosed in a beautiful way on the Feast of the Nativity that we call Christmas.

Joseph is the “son of David,” and so through him the prophecy of Isaiah to the “house of David” can be fulfilled. Emmanuel, “God is with us,” was with Joseph, the son of David, when in obedient and trusting faith he “received [Mary] into his home.” In receiving Mary, he also received Jesus, who was already within her womb by the power of the Holy Spirit.

That’s why Mary figures so prominently in a Catholic Advent. She’s the bearer of Emmanuel. God first takes up his dwelling in her. She’s the model in the flesh of the Church that receives the indwelling of the Savior in his flesh. If the core of the Catholic faith is expressed in the name Emmanuel, the “dwelling with us” is best shown in the persons of Mary, who received him into her womb, and Joseph, who received her into his home, the house of David.

This Gospel passage features that mysterious name “Emmanuel,” which we apply to our Savior, Jesus Christ. It literally means “with us is God.” In that name is a capsule description of our Catholic faith. The single difference between Christianity and all other religions is that God has come to dwell among us as a man.  While both Catholics and Protestants believe that Christ came in the flesh, we believe that he also left us his flesh, as promised in John 6 and Matthew 28:20, so that he could remain with us until the end of time. The whole of Catholic life centers on the belief that God has come into our midst and remains among us. The Sacraments make Christ present to us, particularly the Eucharist, which effects what we call His Real Presence among us: Body, Blood, Soul, and Divinity. We could say that “Emmanuel” is another word for Incarnation. It’s only in carne, in the flesh, that God could dwell with us in that kind of intimacy— that’s at the very heart of Christian faith and the life of sanctity which expresses that faith.

Please watch the short Opening the Word video found at FORMED.org.  Then reflect and discuss the following questions with a friend.

The presenter tells us that Mary provides an example for us of how we are to spend these last days before Christmas. What did Mary do that we should be emulating?

Explain how the prophecy from Isaiah about the mother of the Messiah can be seen in relation to  Mary.

“The Messiah” was composed in 1741 by George Frideric Handel, with Scripture from the King James Bible and from the Psalms included with the Book of Common Prayer. The first performance was in Dublin on April 13, 1742. A man of deep faith, Handel wrote the letters “SDG”—Soli Deo Gloria, “To God alone the glory”— at the end of his work, which was written in a remarkable 24 days.

In today’s Gospel, we see Jesus’s reaction to the news that his cousin John has been arrested: he goes into seclusion back at... END_OF_DOCUMENT_TOKEN_TO_BE_REPLACED

Our baptism has moral implications.

It requires that we live a morally good life and participate in Christ’s mission. As Catholics, we... END_OF_DOCUMENT_TOKEN_TO_BE_REPLACED

When we say the words of the Agnus Dei, or Lamb of God, during Mass, we are directly quoting John the Baptist.... END_OF_DOCUMENT_TOKEN_TO_BE_REPLACED