God as Friend as well as Father 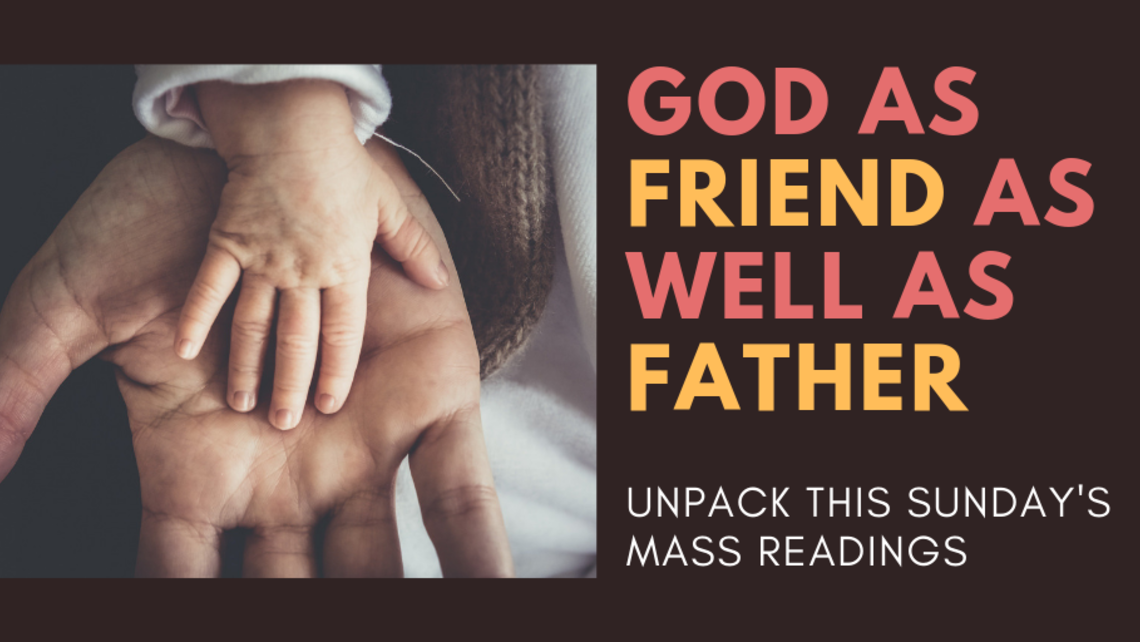 This week’s Gospel reading begins with Jesus teaching his disciples…and by extension all of us…how to pray to God as “Our Father.”

Through those words that most of us know by heart, we acknowledge our relationship as one of a beloved child coming to ask a loving parent for the things we need.

But immediately after the “Our Father,” Jesus tells the parable of the man who asks his neighbor for bread in the middle of the night, a story that contains the famous line: “For everyone who asks, receives; and the one who seeks, finds; and to the one who knocks, the door will be opened” (Luke 11:10). At first, the two don’t seem like they go together, but Jesus is giving us another important truth: God is our Father, but God is also our friend.

This dual relationship - Father and friend - is important for us to understand for our prayer life. At the center of this mystery is the reality that God desires to be “in relationship” with us, connecting with us heart to heart. And as we are drawn deeper and deeper into that relationship, we will experience an ever-increas-ing friendship with God and a growing confidence in approaching him with our needs and the needs of others. In short, we will learn to be with God both as Father and friend.

Abraham in this reading gives us a picture of mediatorial or intercessory prayer. The issue he raises to God is one of justice, suggesting that it would be unjust if God were to punish everyone in the city if anyone in it were innocent. As it happens, there are not even the ten just men in the city that would be required to tip the balance in favor of leniency. In Genesis 19:4 we read, “Before they went to bed, all the townsmen of Sodom, both young and old - all the people to the last man - closed in on the house.” They call out to Lot to surrender his two guests (the angels to which Lot had given hospitality), intending to engage in unnatural sexual acts with them. The angels warn Lot and his wife and two daughters of God’s intention to destroy the cities of the plain for their immorality and help them flee to another town.

Even though Abraham’s prayer dialogue seems not to have its desired effect of allaying God’s wrath, we see him vindicated in his judgment of the city. It is thoroughly corrupt and so is justly destroyed. But we also see that our own human vision is limited and incomplete, so we can never be entirely sure that what we pray for is in the best interest of ourselves or others. We must trust that God knows best. Only he can judge rightly. Only he knows exactly the state of soul of each one and all the opportunities for repentance that he has provided.

St Paul’s description of new life in Christ stands in sharp contrast to the fate of the perverted citizens of Sodom and Gomorrah. These citizens of Colossae were not unlike those others, “dead in transgressions and the uncircumcision of [their] flesh,” he says. But these latter dead sinners of Colossae have had the benefit of burial, not in the ground, but in the waters of Baptism.

And this makes all the difference. The only antidote to the death of sin is the death of Baptism in which Christ shares his death with us, a death, unlike our own, which has within it the power of eternal life. In his dying is the death of our death-dealing sin and its penalty, which is, Paul says, nailed to the cross with him. In a homily on Baptism, St. Ambrose, the fourth-century bishop of Milan, says that at the death of a Christian, Satan stands by and makes his claim on the soul, based on the fact that it deserves death for its sin. But then Christ steps forward, Ambrose says, saying, “He has died and the debt is paid!” The fate of Sodom and Gomorrah is a stark reminder that “the wages of sin is death,” as St. Paul tells us in Romans 6:23.

In this passage from St. Luke we get his shorter version of the Our Father and then a commentary on prayer. This variant form of the Our Father suggests that the prayer we so often say, based on the longer version in Matthew’s Gospel, was probably intended more as a skeletal framework for prayer than as a rote prayer to be repeated again and again. Not that there is anything wrong with doing so, of course, because when we repeat the Our Father with proper attention and concentration, its form sinks into our hearts and informs our other spontaneous prayers, as well.

Jesus’ disciples ask him to teach them how to pray, something that would have been common for the disciples of a rabbi of Jesus’ day. But Jesus’ prayer is unusual in that it addresses God as “Father.” This is what the Catechism of the Catholic Church calls the newness of “filial prayer” in Christ “But his prayer springs from an otherwise secret source, as he intimates at the age of twelve: “I must be in my Father’s house.” Here the newness of prayer in the fullness of time begins to be revealed: his filial prayer, which the Father awaits from his children, is finally going to be lived out by the only Son in his humanity, with and for men.” (CCC 2599). As the eternal Son of the Father, Jesus alone can rightly call God his father. But he freely chooses to admit us to a share of his perfect Sonship, making us sons and daughters of the Father in him. And that theme informs what follows, too, in the commentary when Jesus firsts asks, “What father among you...” and then answers, “How much more will your Father in heaven give the Holy Spirit to those who ask him.” He explains that the Father’s love is certain to respond to his beloved children, so long as we insistently “ask,” “seek,” and “knock” in prayer.

Please watch the short Opening the Word video from any browser at StMichael.FORMED.org.  Then reflect on the following questions and discuss them with a friend.

God is not only our Father. He invites us to be his friend. How do you think a Christian’s relationship with God might be different if one moves from not just viewing God as the Almighty Father but also viewing him as a friend?

When you are a “friend” with someone, you worry less about sharing your needs and weaknesses. In the Gospel reading, the friend who came in the middle of the night looking for food didn’t seem too concerned about being a burden. He was willing to wake up everyone in the house to make his desperate request. The man’s persistence is based on a confident friendship. He had such trust in their relationship that he wasn’t afraid or hindered in asking for what he needed.

Before Advent, there lies before us the Solemnity of Christ... END_OF_DOCUMENT_TOKEN_TO_BE_REPLACED

What will our Thanksgiving, Advent and Christmas be this year? With the continued rise of COVID-19 infections still casting... END_OF_DOCUMENT_TOKEN_TO_BE_REPLACED