I Have Not Come to Establish Peace 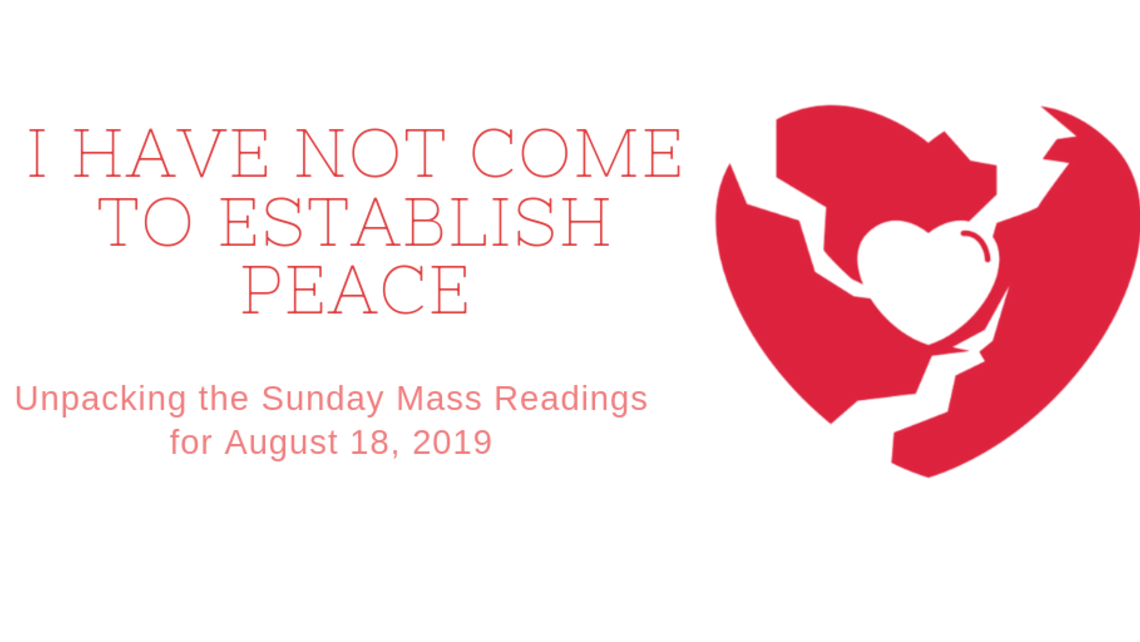 Today’s Gospel reading may surprise us.

Jesus’ words don’t seem to fit the peaceful “forgive  your  enemies,”  “turn  the other cheek” image of Jesus that we’re used to. In fact, he says quite explicitly that he didn’t come to establish peace, but rather, division. What does Jesus mean? Why does he sound so harsh?

To understand Jesus’ words, we must understand the difference between intentions and reality. Jesus does not say that he desires division; he simply says that it will happen. Maybe you’ve experienced this. Maybe you’ve felt alone in your desire to go deeper into your faith. Maybe family members or friends have thought you were strange for becoming Catholic or seeking to live out your Catholic faith more fully. Christians who live out Jesus’ teachings will begin to stand out in the world. They will be noticeably  different. And that sometimes causes division. They will be misunderstood, looked down upon, or openly criticized by those who do not share the same Christian values.

Put simply, it’s not easy to be a Christian. However, as Christians, we are to take heart in our struggles for they are the path Jesus has set for us. Jesus doesn’t promise us any earthly reward. Instead, he promises the cross. He tells us that if we are going to be his disciples, we will have to pick up our cross and follow him. The Christian life is centered on this reality. It acknowledges that we are going to have struggles, pain, and sorrow in our lives. The question is, what are we going to do when we encounter such difficulties.  Ultimately the message  of  the Gospel gives the answer: if we have the courage to turn over our struggles to God, then, like Jesus on Easter Sunday, we, too, can be raised from the dead, and in doing so, those things that are so painful for us in this lifetime will be glorified.

Jeremiah is a prophet and a prophetic figure of Christ. In this passage, we see him delivered from a sort of tomb, as Christ was from the sepulcher.  Jeremiah was particularly zealous for God and indicted several of the last kings of Judah for their political and diplomatic maneuvers aimed at avoiding the inevitable conquest by the Babylonian empire, which Jeremiah knew to be the appointed chastisement of God. Of course it is no surprise that this would be thought to be treasonous by those in power, and Jeremiah paid a heavy price for his fidelity to God. Jeremiah also gives us a clear picture of the internal struggles of soul that all those who fight against the enemies of God must face. We have even come to call “Jeremiads” the sorts of complaints to God that we find in the book called Lamentations, which chronicles the struggles of the prophet and the Jewish nation he loved, and to whose best and truest aspirations he gave voice.

Hebrews is a long exhortation addressed to Hebrew Christians who have been tempted to return to the practices of Judaism. The author makes elaborate arguments from the Old Testament to show that the law, Temple, and Levitical priesthood have all found their fulfillment and  perfect  expression in Christ. We can only imagine how hard a sell this must have been, given the history and grandeur of Jewish ritual practice and all it had meant to the Jewish people. Scholars believe that those to whom the work is addressed may have been priests who had been forced to flee Jerusalem because of their Christian commitment and who now long for the ritual in which they had played a part. The Christian worship in the early Church might have seemed rather plain in comparison, not yet  having acquired the majesty it  would later express. Unlike the grandeur of the visible Temple, which could be seen with the eye, the grandeur of the new life in Christ required faith to see, and it would invite persecution, not Levitical honors. And so we have this appeal to the heroism of a faith that yields “evidence of things not seen,” as we saw in last Sunday’s passage and now in this one for the Twentieth Sunday. This appeal conjures in the minds of  these Jews a great “cloud of witnesses” from Jewish history, most of whom had lived long ago and had never seen the Temple. We, too, he argues, long for the Temple that Christ has now entered, but which we have not yet seen. If we keep our eyes on him, the pioneer who has gone before us, we can have faith that we will see that most beautiful of Temples on high.

For many of us the missing critical dimension of our faith is that sort of zeal that our Lord showed on our behalf. The greatest obstacle we face in this regard is that ours is a culture that stresses personal comfort and fulfillment above all. As C.S. Lewis put it, “For wise men of old, the cardinal problem of human life was how to conform the soul to objective reality, and the solution was wisdom, self-discipline, and virtue. For the modern, the cardinal problem is how to conform reality to the wishes of man.” That quality of culture teaches us to be dissatisfied with discomfort, with struggle, with sacrifice, and it saps our spiritual energies.

Jesus in this Gospel passage is shown hungering for the sacrifice that will win the salvation of the human race, even despising the shame of the cross, as our second reading from Hebrews says. He is a warrior for the good of souls. That is a particularly apt image with reference to this passage from Luke where he asks, “Do you think that I have come to establish peace on the earth? No, I tell you, but rather division.” He, of course, doesn’t will the opposition he will face from evil men and spirits, nor is he shy in facing it, even unto death, for those who need his help. St. Thomas Aquinas notes that zeal is proportionate to the intensity of love, and the love of true friendship creates a zeal that energetically repels anything that might harm one’s friend. From Jesus, who has made us his friends and loved and defended us from death, we can learn to love him zealously in return.

Watch the short Opening the Word video on FORMED.org.  Then reflect upon the questions below and discuss them with a friend.

According to the Gospel reading and the video, how does Jesus view his own baptism?

In the video, the presenter quotes Origen, one of the early fathers of the Church, who said, “The same sun which melts the wax also hardens the clay.” What he meant by this was that the sun has different effects, depending on what material it’s interacting with. Jesus tells his followers that there will be different effects if we choose to follow him. We may be disliked. We may be teased or ridiculed. Our faith may even cause division among our family or friends. In what ways does the message of the Gospel reading divide people in our world? How have you experienced the kind of division Jesus speaks of?

Before Advent, there lies before us the Solemnity of Christ... END_OF_DOCUMENT_TOKEN_TO_BE_REPLACED

What will our Thanksgiving, Advent and Christmas be this year? With the continued rise of COVID-19 infections still casting... END_OF_DOCUMENT_TOKEN_TO_BE_REPLACED