I Will Be With You Always 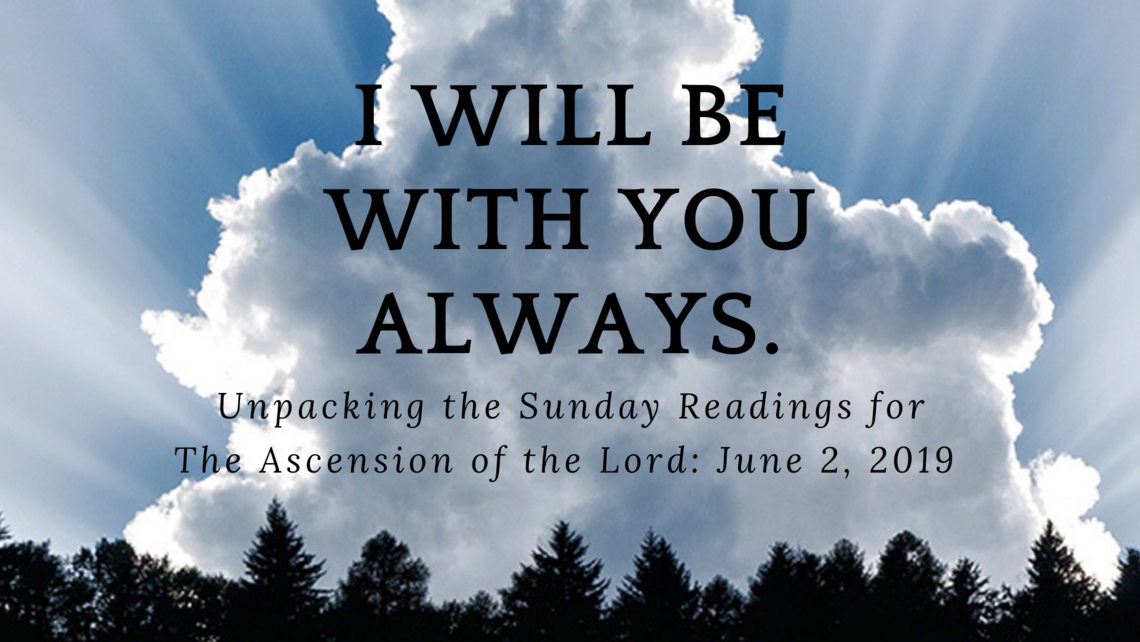 Unpacking the Readings for The Ascension of the Lord

Then one day, everything changes. He tells you that he is going to leave you and won’t be coming back.

He gives you advice on how to live without him, reassures you of his love, then disappears. How would you feel? The pain would almost be unbearable. That seems to be the exact situation the disciples of Jesus faced in today’s Gospel reading. Can you imagine how difficult this situation was for them to see Jesus ascend to heaven and how confusing their task ahead appeared to be?

And yet, Jesus promised them—and he promises us all—that he would never abandon us. Though he ascended to the Father in heaven, Jesus does not leave his disciples alone. He gives all Christians his Holy Spirit, to be our guide and eternal friend. Moreover, he shows them what their reward will be if they remain faithful. Just as Jesus ascends to the Father, so too will we fully enter into God’s life if we remain faithful to his promises.

It is a rare thing in the Liturgy when our first reading and the Gospel reading recount the same event. In the case of this important Solemnity of the Ascension, it happens because the author of both accounts is the evangelist Luke who uses this event as the culminating event of his Gospel and the opening event of his “Acts of the Apostles,” which is the sequel, we might say, of the former. Jesus’ being “taken up” is an event that is full of significance because it indicates visually to Jesus’ followers—in the manner of a burnt offering of the Old Testament Temple regime—that the offering of Christ has been accepted by the Father.

It also indicates that Jesus is now seated at the “right hand of the Father,” as we say in the Creed, meaning that he is at that critical place of influence. (The right hand of the king was the hand of power and judgment, and the person at his right hand could “stay his hand” or recommend leniency in judgment.) From this place, at the end of time, the Lord Jesus “will return in the same way as you have seen him going,” as the angel tells the disciples who were assembled at his Ascension. Until that time, the Church’s charge is to spread from “Judea and Samaria, and to the ends of the earth.” In this “last hour,” this final age of the world that is the time of the Church (CCC 670), we are not to busy ourselves looking at the sky for his return, but in spreading his kingdom.

From the council of Jerusalem and the assembly of the apostles in the first reading,  we move now to the heavenly Jerusalem whose foundations are the same: “the twelve apostles of the Lamb.” The proliferation of twelves in this reading (twelve gates, twelve angels, twelve courses of stones and twelve apostles) remind us that the Church—both of earth and heaven—means not an end to the twelve tribes of Israel, but the continuation of Israel. That was the issue that troubled the Church of the book of Acts. Is the Church something entirely new or is it just a continuation of the Jewish religion? And, as we have seen, the answer is emphatically “Yes!” That is, it is entirely new with the newness of grace in Christ, and entirely in continuity with God’s plan from the beginning for Israel. So the ancient prayer of Israel, “let all the peoples praise thee!” (Psalm 67:5, RSV) is answered affirmatively by Jesus and the Church he founded, in which all the peoples now praise him.

In several verses from Acts 15 not part of our first reading, the Apostle James quotes three prophets of Israel in saying, “After this I will return, and I will rebuild the dwelling of David, which has fallen; I will rebuild its ruins, and I will set it up, that the rest of men may seek the Lord, and all the Gentiles who are called by my name, says the Lord” (Acts 15:16-18, RSV). Jesus is the rebuilt dwelling of David who calls both Jew and Gentile by name and who, as “living stones,” builds them up “into a spiritual house” (1 Peter 2:4-5). In its final, glorious form that spiritual house, the New Jerusalem, has no temple, “for its temple is the Lord God almighty and the Lamb.”

These are the final words of Luke’s Gospel. They celebrate the event we sacramentally recall and relive today in the Church and point us toward Pentecost, but they also give us an important charge.

In our first reading from Luke’s Acts, he adds the further detail from the event of the Ascension that Jesus commissioned his followers to “be my witnesses in Jerusalem, throughout Judea and Samaria, and to the ends of   the earth.” Our response to that important call to mission, to what we have come to call the New Evangelization in our own day, depends vitally upon our being “clothed with power from on high,” upon our drinking in of the Holy Spirit that Jesus  promises  us.

Note that the disciples are obedient to Jesus’ command to “stay in the city” and return to Jerusalem “with great joy” and are “continually in the temple praising God.” This is what we are charged to do too. We must constantly implore God’s grace for ourselves and his Church in the work of mission, which the Catechism calls a “requirement of the Church’s catholicity.” In order for the Church to be the “Catholic [universal] Church” she needs the Spirit. Once “clothed with power from on high” we, too, will find the joy of those first apostles and the energy to do what we were born in Baptism to do: be “witnesses of these things” “to the ends of the earth!”

Please watch the short Opening the Word video on StMichael.FORMED.org

According to the presenter, what does it mean that Jesus ascended into heaven?

How is Jesus’ Ascension a message of good news for the disciples and Christ’s followers today?

At the end of the video, the presenter asked each of us to consider an important question. So let’s take some time to discuss that question now: Am I aware that through the sacraments I am clothed with power from on high—in other words, with the Holy Spirit?

The great sacraments of the Church—Baptism, Confirmation, the Eucharist, Reconciliation, the Anointing of the Sick, Matrimony, and Holy Orders—have endured for thousands of... END_OF_DOCUMENT_TOKEN_TO_BE_REPLACED

The question on everyone’s mind is “When will St Michael’s be open for public Mass?” The short answer is... END_OF_DOCUMENT_TOKEN_TO_BE_REPLACED