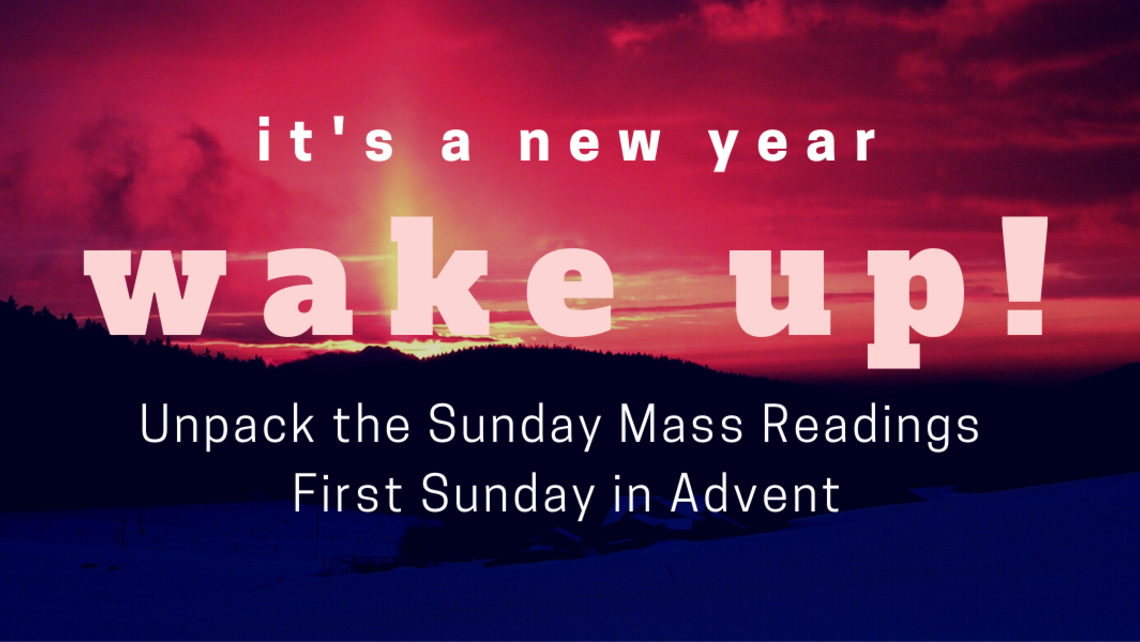 Happy New Year! If this strikes you as a bit premature, it isn’t really because this Sunday marks the start of the new Church year. In the Catholic Church, the first Sunday of Advent is the beginning of the cycle of readings, holy days, and holidays for roughly the next 365 days. It’s also the time of year not only when we are called to prepare our hearts for the coming of Jesus at Christmas, but also when we are asked to examine our lives and take stock, spiritually speaking.

The readings for today all carry a common theme: Wake up! Wake up from the slumber that keeps marriages mediocre, careers unfulfilling, moral lives stagnant. Wake up to the possibility of a new beginning, a new way of living that welcomes Jesus into the cribs of our days, the mangers of our souls. We are told to awaken from the slumber that is robbing us of a deeper and more meaningful relationship with our God, and begin to live the new and abundant life that we have been promised.

Sometimes people use today’s Scripture passages, especially those in the Gospel about two men working in the field and one being taken away, in light of a relatively new and profoundly un-Catholic theology of the “Rapture,” which says that the faithful will be taken to heaven and the unbelievers “left behind.” We will see that the opposite is true. It is those who are left behind in covenant with God who are saved, and, like in the days of Noah, it is those who are unfaithful who will be swept into exile from God.

This Advent, we not only want to make a new beginning with the Church, but we also want to be sure that we are with those who are “left behind” in covenant with God at the end of all time.

The Jews were accustomed to  the idea that the blessing of Israel would mean the blessing of all nations. Israel was strategically located between the two great seats of power in the ancient world, Egypt and Mesopotamia. That meant that the vital arteries of trade crossed through Palestine, making it more influential than its own power or wealth would otherwise suggest. Jerusalem and its God were well known throughout the region and beyond. Judaism’s radical monotheism was an oddity in the ancient world and earned the admiration of many seekers of truth beyond the borders of Israel.

So that Isaiah should say “All nations shall stream toward it” and “from Zion shall go forth instruction, / and the word of the LORD from Jerusalem” wouldn’t surprise Jews. Rather, it would directly connect with the understanding of their important place in the plan of God. Only if we fall into the common misconception of Israel’s historical insignificance are we surprised by the Christmas story. To those who honestly seek the truth and who are attentive to the signs of the times in any age, the surprises of God are easier to spot and embrace.

In this letter, St. Paul gives us what could be a catalog of our vices of today: carousing, drunkenness, sexual excess and lust, quarreling, and jealousy. That the Christians of an increasingly debauched Rome should be warned of the same sins by which we are tempted shouldn’t really surprise us. These aren’t simply the sins of ancient Rome or modern America; they’re the sins that plague people of every time, place, nation, and race.

The time in which we’re now living is the dispensation of grace in Jesus Christ, that time between his first coming and his second. In every time and place, wakefulness is the primary posture of those who search for God; wakefulness against temptation and for his visitation. We always stand at that moment when, “The day is at hand.” In the Advent season, we practice our wakefulness with particular attention. We turn the events of God’s past saving actions, and particularly those of the Nativity, over in our minds so as to engrave the outlines of his modus operandi; his way of acting in our souls so that we might not be caught unaware at his next visit. As Christians, we always live at the border, between the long night of sin and the eternal dawn.

The warning that Jesus levels at his disciples isn’t so much a caution against sin as it is against being “unconcerned.” This is the way that he describes the attitude of those who were swept away in the flood at the time of Noah. Their mistake was in being unconscious of God in the midst of ordinary activities. Jesus heightens this warning as he describes the time of his second coming in verses 40 and 41. Certainly nothing suggests sin in either activity, yet one will gain an everlasting reward and the other not. What separates the two destinies?

In a word—wakefulness. It isn’t for us to know when the Lord will come, but we need to be aware that he will come. We’re called to live in a state of wakefulness, of spiritual attention. Like the homeowner who doesn’t know exactly when the thief will come testifies to the fact that he must “keep a watchful eye,” the Lord for whom we wait tells us, “You also must be prepared.”

Prepare for your study by listening to what Dr. Edward Sri has to say about today’s Scripture readings. Watch the brief Opening the Word video on FORMED.org.  Then reflect upon and discuss these questions with family and friends:

What is the major thrust of the readings for the first week of Advent, according to Dr. Sri? What are we being called to do at this time of year?

A common non-Catholic teaching about the end of times is the Rapture. What does the whole idea of being “left behind” mean to you?

Although Christians have always believed that both the living and dead will encounter Jesus in the Final Judgment, the idea of a Rapture (in which Jesus comes once to take the devout and leaves the rest of humanity behind to suffer for a thousand years until he comes again, apparently for the third time) is a recent development. This teaching was developed in the 1830s by John Nelson Darby and received enormous publicity in the 1990s in the “Left Behind” novel series written by Tim LaHaye. For the Catholic teaching on the final judgment and end of time, see the CCC 668ff.

The start of a new liturgical year, beginning with the first Sunday of Advent, also marks the transition from one lectionary cycle (A, B, or C) to the next. These cycles are a result of the Second Vatican Council, which ordered a change in the Sunday readings at Mass so that Catholics would become more familiar with the text of the Bible. As a result we now have a three-year cycle of readings built around readings from the three synoptic Gospels—Matthew, Mark, and Luke.  Today, we begin cycle A and will hear from the Gospel According to Matthew.

On Monday, July 6, the Sacrament of Reconciliation will resume inside the church in our newly configured confessionals. While waiting in line, please maintain... END_OF_DOCUMENT_TOKEN_TO_BE_REPLACED