The King of Love 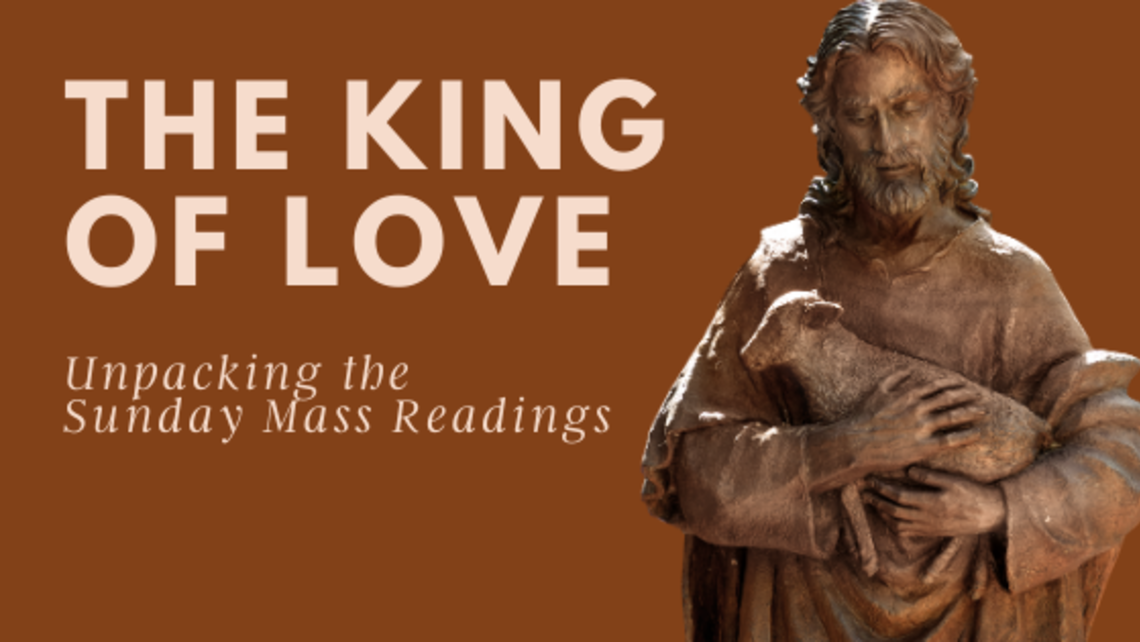 Unpacking the Sunday Mass Readings for Christ the King

Last week we heard the Gospel about the end times and learned that, instead of fear, we are to interpret that message as one of hope and encouragement.

Today we celebrate the Feast of Christ the King.

What is your image of a king? Among other things, you probably think of power and splendor when you think of royalty. The first-century Jews had some very specific expectations concerning the messiah, the anointed king, about whom the prophets spoke. And so when some gazed upon Jesus hanging on the cross, they laughed at the idea that this could be the longed-for Messiah.

Jesus was mocked by his fellow Jews, the thief who was crucified with him, and the Roman soldiers as well. His apparent weakness and disgrace on the cross were the very antithesis of the worldly idea of a king. But for Luke and the other early Christians, this crucifixion scene is the perfect image of Christ as King: The cross is the throne from which Jesus rules as the King of Love. His death is his loving gift to us.

From the cross Christ invites us to share in his reign. We participate in his kingship by sacrificing ourselves in love—by caring for the weak and the sick, by helping those in need, by sharing our time and our very selves with those around us. In the end, love itself proves to be stronger than even death. In the end, Love itself reigns forever.

It’s not surprising that the Church gives us this reading about King David on this solemnity of Christ the King. Jesus is the Son of David as well as the Son of God and the inheritor of the throne of that illustrious King of Israel.

David became king of Judah at age thirty, the age at which Jesus’ public ministry began. He reigned as king of Israel for thirty-three years, the age at which Jesus died and also the length of his reign as messiah. One other interesting parallel between David and Jesus is that Jesus is referred to frequently as the Bridegroom in the New Testament. In this reading, before David is anointed (made “messiah”) and covenanted to Israel, those present say, “Here we are, your bone and your flesh.” There’s a clear resonance between these words and the words of Adam when he beholds his bride, Eve, in Genesis 2:23, “This one, at last, is bone of my bones/and flesh of my flesh.” In becoming king of Israel, David likewise weds Israel in a symbolic marital covenant. All of this points to the eventual marriage between Christ the King and the new Israel, his bride, the Church.

St Paul gives us a beautiful description of Christ’s kingship and how we’ve been made heirs of the kingdom which he inaugurated through redemption and the forgiveness of our sins. His kingship allows us to not only be priests and prophets, but also kings, by virtue of our anointing in Baptism. In the Christological canticle that finishes this reading, we see a very clear profession of the apostolic faith in Christ’s preexistence as the eternal Word through whom everything was made.

We need only read the full context of St. Paul’s canticle to recognize that he teaches the divinity of Christ, who is creator not creature. It’s only as the divine Son that Jesus can be “firstborn” of the divine Father. As man, he’s firstborn of the dead by his resurrection. Christ came as man, St. Paul tells us, “that in all things he himself might be preeminent.” So Jesus’ kingship is the fruit of his divinity but is also exercised in his humanity. He’s the divine king of all creation and the Davidic king of the New Israel into which the Father wills that all of creation be drawn.

This is an odd king who hangs in public disgrace on a cross to receive the jeers and derision of crowds and criminals. The Romans hung a sign above his head to that effect, intended as cruel irony, but which speaks the honest truth. They meant to say to the Jews, “You’re slaves and so this one, dying the death of a slave, is a fitting king for you.” They didn’t realize that we’re all slaves to sin and that only the death of this innocent king of slaves could free us.

The centurion at the foot of the cross recognized Christ’s innocence, but it took a convicted criminal to pierce the heart of the mystery of Christ’s odd kingship, “Jesus, remember me when you come into your kingdom.” There was never a more profound act of faith than that. Imagine the depth of faith needed to see in the man mocked, beaten, and dying as one who would rule as king. Yet this thief, and innumerable sinners since, has received the grace to see in this one dying the death of a slave as their Lord and king. Sinners often understand it best.

Please take just a few moments to watch the Opening the Word video found at FORMED.org.  Then reflect and discuss these questions:

1. In his reflection, the presenter says that for Luke and the early Christians, the cross is the throne from which Jesus rules as king. How does this idea of the cross as a throne fit with the world’s image or expectations of a king? In what ways is the cross an appropriate throne for Christ the king?

2. The presenter said that Jesus invites us to share in his reign of love. How do you see Jesus inviting you to participate? Do you see yourself already sharing in his reign? If so, how? If not, what might you do to start sharing in it?

3. The Jews and Romans both mocked Jesus for expressing his kingship through sacrificial love. Have you experienced mocking for following Jesus? How can we respond to this attitude of the world?

"Now Christ has communicated this royal power to his disciples that they might be constituted in royal freedom and that by true penance and a holy life they might conquer the reign of sin in themselves. Further, he has shared this power so that serving Christ in their fellow men they might by humility and patience lead their brethren to that king for whom to serve is to reign. But the Lord wishes to spread his kingdom also by means of the laity, namely, a kingdom of truth and life, a kingdom of holiness and grace, a kingdom of justice, love, and peace. In this kingdom, creation itself will be delivered from its slavery to corruption into the freedom of the glory of the sons of God. Clearly then a great promise and a great trust is committed to the diciples: All things are yours, and you are Christ's, adn Christ is God's."

We focus on providing our... END_OF_DOCUMENT_TOKEN_TO_BE_REPLACED

REPORT ON OUR PARISH FINANCES

We have made tremendous cuts in our parish budget and continue to be wise stewards of our... END_OF_DOCUMENT_TOKEN_TO_BE_REPLACED