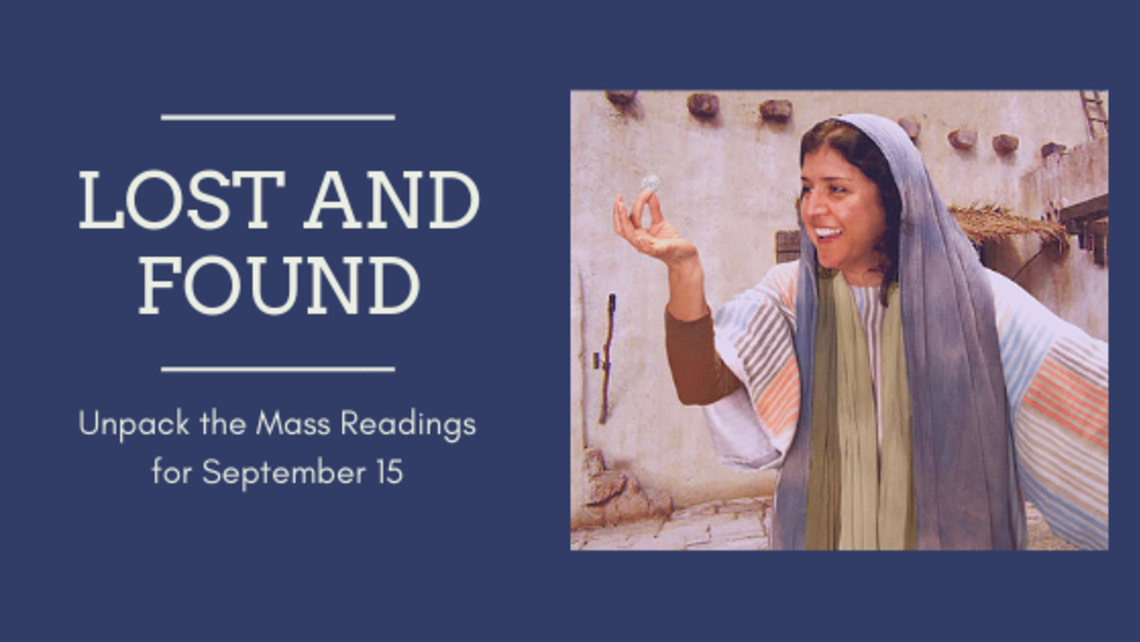 Unpack the Mass Readings for September 15

The theme of today’s reflection is “Lost and Found.”

Do you remember a time when you lost something, perhaps a possession of great importance? When we lose something of high value, we search and search until we finally find it. And the discovery brings such a sense of relief. The greater the value of what was lost, the more we rejoice in finding it.

Three times, Jesus uses this theme of something valuable being lost and found as the backdrop for his message in the Gospel reading today: a shepherd losing one of his sheep, a woman losing a coin, a father losing a son. Jesus uses these analogies in a personal way to describe God’s own seeking us out when we are lost and separated from him by sin: all of heaven rejoices when even one sinner is found and returns to God. That is the kind of rejoicing that happens in heaven for us!

But the analogy doesn’t end there. We can find incredible gratitude stirring up in our hearts when we think of the ways God has pursued us, and found us when we were lost. The more lost we were, the deeper our gratitude should be. Moreover, we should share the Lord’s heart for those who are lost. Once we’ve been found, God calls us to share in his desire to see others found and restored in relationship with him.

Moses Maimonides, a twelfth century philosopher and rabbi, points to the incident of the golden calf as a turning point in the life of Israel. The Egyptians and Canaanites worshiped bull or calf deities as symbols of fertility, wealth, and power. Yahweh, on the other hand, had just led the Jewish people out of Egypt, demonstrating not merely a power in nature but the Power behind nature. Yahweh had demonstrated that he was the God of gods in the clearest way possible by defeating the powerful gods of Egypt.

But, cast into doubt by Moses’ long absence on Mount Sinai, the people had Aaron form the likeness of a calf as an object of worship. Despite all that God had done for them, they fell back on the comfortable patterns of their former lives in Egyptian slavery. Ironically, Yahweh seems to have in effect said, “If you want to live like slaves you will, but you’ll be slaves to a law that Moses will give you rather than to the gods of Egypt.”

We sometimes fall into the same temptations as Israel. We fail in faith and start to rely on our own power or the power that we can derive from nature rather than to give ourselves in loving trust to God. He has saved us before and will do so again, as long as we don’t give ourselves over to the worship of created things; to do so only leads to slavery.

In this reading, St. Paul exemplifies the necessity of our depending not on our own power but on the mercy of God. Paul’s fierce loyalty to the law and the God of the law had led him to reject the claims of Christ. Paul wasn’t seeking Christ but Christ found him. He blinded Paul for a time so that he might see in a new way when he received the Gospel.

It’s vital we remember that Israel proved time and time again to be unworthy of the task God set before her. Paul, likewise, protests that despite the task that has been set out for him, he’s the worst of sinners. We, too, have received our salvation and faith without any merit on our part. Despite our sin, we’ve been chosen, grafted onto Israel. Israel is rightly proud of its irrevocable status as the chosen people; we’re rightly proud of all of the wonderful things that we’ve been given as Catholics. We fall into blindness, however, when we begin to think that any of that which we’re proud of is ours by right and not by grace. When we fail to give glory to God for his gifts, we also fail in being “an example to those who would later have faith in him and gain everlasting life.” The best example we can offer is that of mercy at work in us.

There’s good reason to believe that Luke uses this story as a parable of the eventual offer of salvation to the Gentiles. In his Gospel, he shows a dual interest in telling the Jewish story and the world story. The parable of the prodigal son is told to an audience of Pharisees but with tax collectors and sinners gathered around as well. Jesus first tells two stories about one lost sheep and one lost silver piece. Then Jesus proposes the story of a father who had two sons, one of them the prodigal. If a sheep or a coin are worth the struggle to save it, certainly a human soul—a son’s soul—is worth the same.

Our readings today talk about things that have been lost, and then found. Have you ever lost something that was really valuable to you? Could someone share a “lost and found” story from their own life? How did you feel when the item was rediscovered?  Please watch the short Opening the Word video on FORMED.org, then reflect and discuss these questions with a friend:

Most of us can relate to the image Jesus is trying to paint in the Gospel reading. He pursues us when we are lost. And like the widow searching for that lost coin, sometimes that involves diligent

searching and searching, turning the whole house upside down in the process. For some of us, God has searched us and pursued us with great diligence. In what ways has God pursued you while you were away from him? How has God been like a good shepherd who found you and returned you to the fold?

Seeing God’s incredible mercy in our own lives is what motivates us with love and compassion to see others. For a disciple, we are not only meant to experience God’s search for us until we are found, we are meant to share his heart for others. How is God inviting you to share his heart in your own life? Have you seen people in your life that God has given you a desire to see “found”?

Reprinted from the Opening the Word Leader Guide with permission from Augustine Institute.

In today’s Gospel, we see Jesus’s reaction to the news that his cousin John has been arrested: he goes into seclusion back at... END_OF_DOCUMENT_TOKEN_TO_BE_REPLACED

Our baptism has moral implications.

It requires that we live a morally good life and participate in Christ’s mission. As Catholics, we... END_OF_DOCUMENT_TOKEN_TO_BE_REPLACED

When we say the words of the Agnus Dei, or Lamb of God, during Mass, we are directly quoting John the Baptist.... END_OF_DOCUMENT_TOKEN_TO_BE_REPLACED