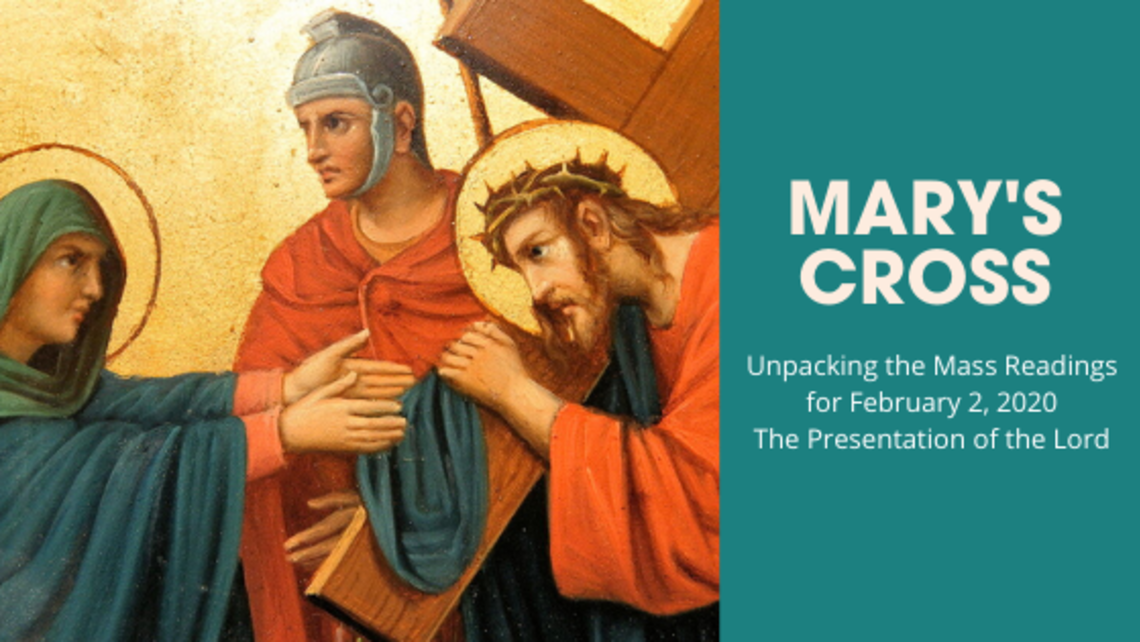 Unpacking the Mass Readings for February 2

When Joseph and Mary came to the Temple forty days after Jesus was born in order to fulfill the ritual of the presentation of the firstborn, Mary was adjusting to life with a new baby and a husband.

She probably wasn’t thinking about all the struggles and hard times that would lie ahead for her baby boy.

At least not until Simeon comes up to her and tells her that her son is destined for the fall and rise of many and that a sword will pierce her own heart, causing profound suffering. At that moment Mary might have begun to wonder just what she had agreed to when she had said “yes” to the angel’s request a little less than a year before. As Simeon, and later Anna, spoke to her, Mary must have begun to realize that, as Venerable Fulton Sheen put it, “from that moment on, every time she would lift infant hands, she would see fall across them the shadow of nails.”

In her role as Jesus’ first and most perfect disciple, Mary shows us that the suffering lies at the heart of being a Christian. Almost from the moment of his birth, she was aware of his ultimate destiny. She was willing to follow her son to the cross. Are we willing to follow him to our own Calvary?

This passage from Malachi at times in the liturgy is applied to John the Baptist: “Lo, I am sending my messenger to prepare the way before me”; and at other times—as on this Feast of the Presentation—to our Lord himself: “Suddenly there will come to the temple the LORD whom you seek.” Both the one who goes before and the One who comes after are referred to as a “messenger.” Of course, St. John the Baptist is the first messenger of the “messenger of the covenant,” which John foretells and which Jesus fulfills.

Interestingly, Malachi, the name of this prophet whose text we are reading, also means “my messenger.” This reminds us that each of us is to serve in this same kind of prophetic role in the world in which we find ourselves. Each of us, as a part of the pleasing sacrifice to the Lord that our new covenant lives present, is to prepare for the Lord’s coming in the lives of others by testifying to his coming into the temple of the Holy Spirit, which we are! Our experience of faith often includes refinement in the fires of temptation, and the moral purification from sin that is like the lye applied to cleanse and whiten wool. Once tried and tested and so refined, we can shine like silver or gold before those who need a testimony as to the eternal value of life in Christ.

In our second reading we find the same principle that we found in our first. Jesus himself was tested and suffered to win the possibility of our own purification. In so doing, he unites himself directly with each one of us. And that is, in a certain sense, the very substance of what we celebrate on this feast. God himself, the One entirely beyond time, enjoying the eternal peace of his immutable beatitude deigns to enter the realm of change. He comes down from the divine rest to enter into our human restlessness. Embedded, as we are, in the realm of matter and change, we are subject to constant change—the change of incline, of growth, as well as the change of decline, of death.

While we tend to see these as opposites (and they can be and often are), Jesus makes the ultimate decline, the decline into death, a ladder to life. That is what happens when divinity meets humanity. Humanity, even in its worse dimensions, is immeasurably altered by that which is unchanging. The mutable changes to immutability, the mortal rises to immortality, death is made the doorway to life unending. In the Presentation of this Child in the Temple, we are being presented with a gift that surpasses even the innocent beauty of a new human life being borne in the arms of its mother and offered in thanks back to the God who gave it. We are presented with more than just the gift of a mother’s love and gratitude to God for her son; we are presented with the Gift of God’s own Son to that Mother and through her to all of her children. In fact, it is a mutual presentation in which she gives back to him, for us, what he has given to her, for us.

Luke paints a remarkable scene for us. A soft footfall on the pavement of the Temple interrupts the cacophony of official and private prayers, said or sung in Hebrew, as a couple approaches the small altar where the offerings of the poor are made. Then the Passover of the firstborn of Israel during the tenth plague of Egypt is recalled by an offering of the first fruits of the womb. But unlike all the other ransomings of the firstborn of Israel in this Temple, which have been symbols or recollections of the older Passover or ransoming, this offering and ransom is the event of which all the others were merely prophecies. All the offerings made on sand-scoured desert altars or barren heights, all the offerings made in the echoing chambers of this Temple—through thousands of years—point only to this offering, which passes through the hands of a poor provincial girl.

Perhaps she knows that her offering is really his offering and that its fulfillment is yet to come. In this first representation of the new and eternal sacrifice, which will be offered until the end of time in the Mass, the Liturgy of the Word is proclaimed by Anna, and by Simeon in his hymn of answered faith and hope fulfilled; and then a Jewish priest, whose name is entirely lost to us, but whose very anonymity is itself a type for all the Christian priests to come, becomes the first to hold the Christ aloft an altar before the faithful who await the redemption of Jerusalem, as we do today at our Mass. And in that moment we see that the One that Mary and Joseph ransom for a pair of birds, has, in fact, ransomed us all.

Watch the short Opening the Word video on FORMED.org for the Presentation of the Lord.  Then reflect upon these questions and discuss them with friends:

Why does the presenter say Mary would initially have been comforted when she heard Simeon’s first part of the prophecy? Why would her happiness have immediately been tinged with sorrow?

Why is the Presentation in the Temple sometimes called Mary’s second Annunciation?

How does Mary show us the way to accept the inevitable crosses of our lives?

When Jesus was presented in the Temple, he was recognized as the Messiah by both Simeon and Anna. Interestingly their reactions are quite different. Once he saw the Messiah, Simeon was ready to go in peace to God. Anna, on the other hand, began telling everyone who was looking for the redemption of Israel about the child (Luke 2:38). In this regard, she is one of the first to bear witness to Christ. She is called a “prophetess” in Luke 2:36, the only woman in the New Testament to be specifically called by that term.

Several of them are extraordinarily difficult for... END_OF_DOCUMENT_TOKEN_TO_BE_REPLACED

Lent begins this Wednesday, February 26. The season of Lent is the liturgical season consisting... END_OF_DOCUMENT_TOKEN_TO_BE_REPLACED

The second collection on March 8th will go toward the purchase of backpacks and supplies for families who... END_OF_DOCUMENT_TOKEN_TO_BE_REPLACED