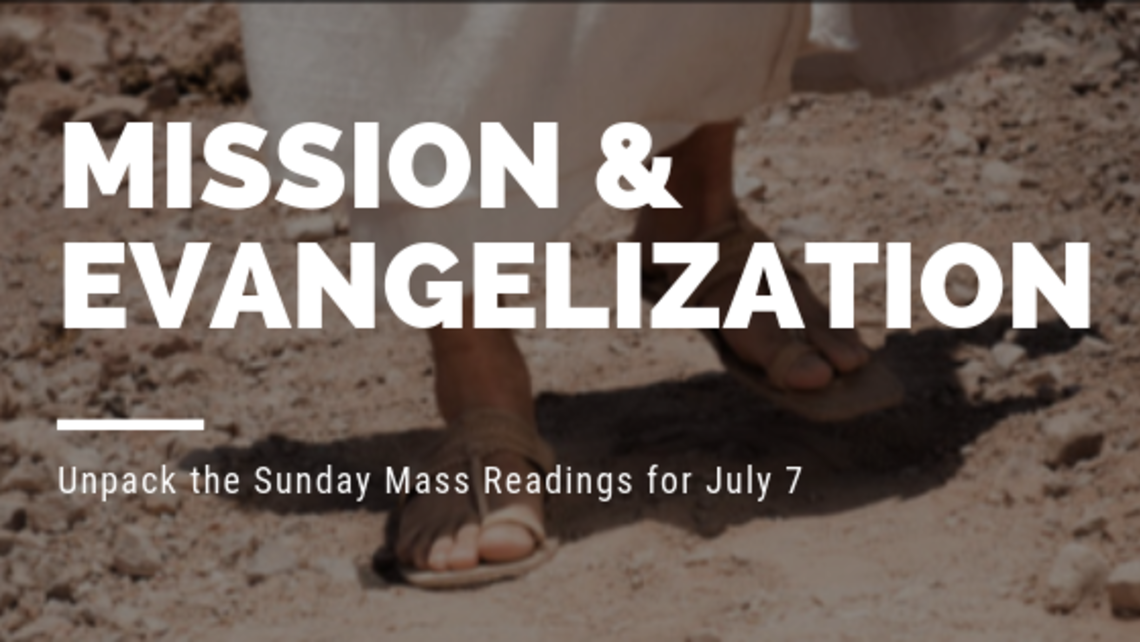 Unpacking the Mass Readings for July 7

Evangelization is not a job assigned only to bishops, priests, and religious brothers and sisters.

Pope Paul VI insisted that the “task of evangelizing all people constitutes the essential mission of the Church.” And by “the Church,” he meant the Church as a whole—everyone, including the laity. But for many of us, the work of evangelization sounds scary. We might be thinking, “Me? Evangelize? How do I do that?” We might even be wondering what evangelization means.

Today’s Gospel reading gives us some answers because Jesus presents a formula for the best way to evangelize and spread the Gospel message. This formula involves both a giving and receiving of Christ’s mission. We give when we spread his message with joy and gratitude, and we receive when we can rest in the peace of Christ, knowing that we have fully accepted God’s words in our hearts.

In this passage from the last chapter of the prophet Isaiah, we get a vision of Jerusalem as the mother of the remnant, those who survive the tribulations of the Babylonian conquest and exile. But it is simultaneously a vision of a renewed Jerusalem in the “new heavens and new earth” that are promised for the future: “For behold I create Jerusalem a rejoicing, and her people a joy”

(Isaiah 65:1718, RSV). This promised new heavens and new earth, with Jerusalem as its capital, has already arrived in a provisional form in the arrival of Christ and his kingdom, when “the LORD’s power shall be known to his servants,” but it is also promised to the Church of the end time when God’s enemies will be confounded and his faithful ones vindicated as those from all nations are united in peace.

Isaiah 66:7 uses the image of labor pains. Those who have suffered the tribulations of invasion and exile are invited to see these as labor unto birth. And, in fact, the author seems to suggest a birth like that which is traditionally assigned to Mary: “Before she was in labor she gave birth; before her pain came upon her she was delivered of a son”

(RSV). At that time, the Body of Christ, the Church, will be delivered from her trials and they will give way to a time (or an eternity) when our “bodies flourish like the grass” and we are cared for by our loving God “as a mother comforts her child.” May his kingdom come!

In St. Paul’s letter as in the first reading, we have an ending. St. Paul closes his letter to the Galatians by returning to basics. The argument he has been making is that God’s work in the people of Israel has given birth to something new in Christ, who in his death has signaled the end of the obligations of that older covenant and announced the establishment of a new one in him. In this sense, not only has that older order been transformed into a new one, but the whole of the “world has been crucified to me,” Paul says, “and I to the world.” That yields not just a new religious system or set of rules but a “new creation.” To nature has been added a super nature, a grace, about the full effects of which Revelation says, “Behold, I make all things new” (21:5).; It is “a rule,” he says, that has made meaningless circumcision or uncircumcision, the old signs of being a Jew or Gentile. This new rule bears “peace and mercy” for us.

Finally, there is some controversy among scholars as to whether the “Israel of God” he refers to here is a reference to the Jews or to the Christian Church as a kind of new Israel of God. But in one sense, that confusion can be instructive. His whole argument has been that the older has given birth to the new and that God’s plan is a unity in which the deep mysteries of Israel and its history are now brought to light in Christ and his Church. The whole point of Galatians is, in fact, that in the Church there is no longer Jew and Gentile but only the one Israel of God.

In addition to the Twelve, Jesus also appoints seventy or seventy-two others to serve, we might say, as “advance men” for his own ministry.* But by their very number we see that the “kingdom of God” that Jesus instructs them to announce means that the role of Israel—especially through a messianic figure that Isaiah calls the servant of Yahweh—to be “a light to the nations” is coming to fulfillment (Isaiah 42:6 and 49:6). In Jewish tradition, seventy (or seventy-two) is the number of the nations descended from Noah and his sons after the flood (Genesis 10) and the number of the offspring of Jacob who went with him into Egypt (Exodus 1:5).

Deuteronomy 32:8 even seems to connect these two, saying, “When the Most High gave to the nations their inheritance, when he separated the sons of men, he fixed the bounds of the peoples according to the number of the sons of God [that is, Jacob]” (RSV). So the seventy of Israel is God’s “portion” (Deuteronomy 32:9) of the seventy nations, and specially set aside for his purpose to bring the truth of his covenant love (Isaiah 42:6) to the world. As Isaiah 49:6 (RSV) puts it, “I will give you as a light to the nations, that my salvation may reach to the end of the earth.” When Jesus sends out these new elders of Israel, he is telling his people that the kingdom, now “at hand,” will reach to the nations!

Watch the Opening the Word video at StMichael.FORMED.org. Then reflect and discuss the following questions:

According to the presenter, what is the formula for evangelization that Jesus provides his disciples?

How can we embrace this formula in our lives as well?

What is the significance of the “peace” the disciples would offer in their evangelization? Why should this be cause for rejoicing?

Before Advent, there lies before us the Solemnity of Christ... END_OF_DOCUMENT_TOKEN_TO_BE_REPLACED

What will our Thanksgiving, Advent and Christmas be this year? With the continued rise of COVID-19 infections still casting... END_OF_DOCUMENT_TOKEN_TO_BE_REPLACED