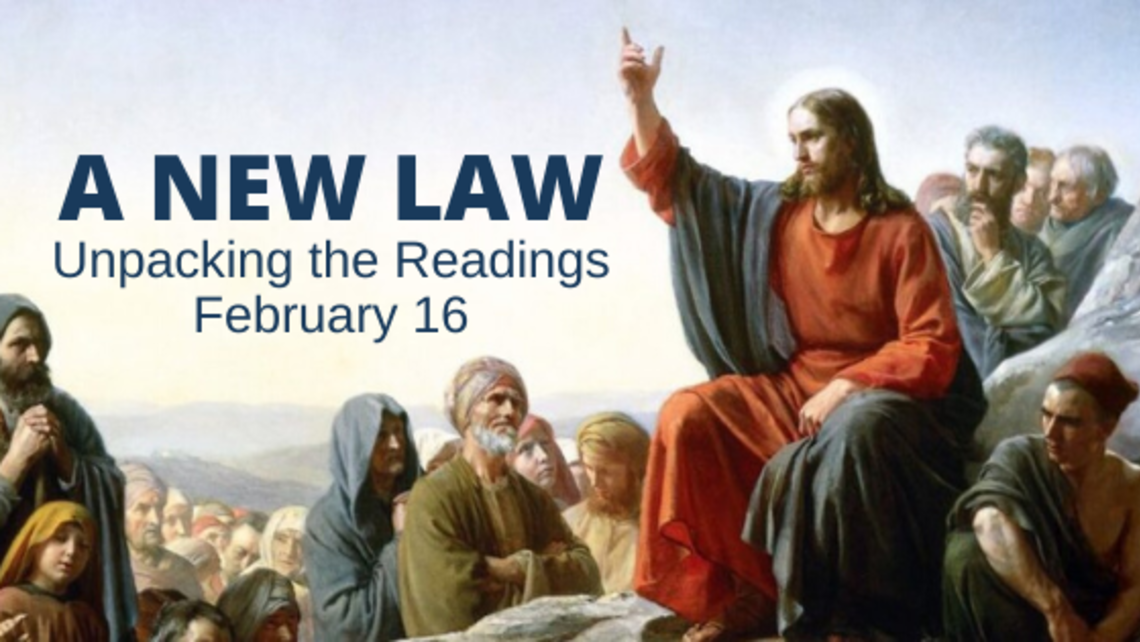 Unpack the Readings for February 16

This week’s Gospel is all about the Law.

It starts with the beginning of the Sermon on the Mount, which contains Jesus's teaching about loving your enemies, as well as the Beatitudes. We may never have given any thought as to why Jesus gave these teachings on the side of a mountain, but the time and place matter if we are to truly understand how radical Jesus’s message was in his time.

In first-century Israel, the hill country of Galilee was the hotbed of revolt. Revolutionaries and radicals sometimes went to this area to plot against Herod and the Romans, who were a hated occupying force. If you saw Jesus heading to the Mount, you might have assumed he was going to give a fiery speech  against  the Roman oppressors. If you had followed him, what you would have heard is a not a “Down with Rome!” speech, but a set of teachings about how he came not to abolish the Law of the Old Testament, but  to  fulfill it.

Jesus’s message was radical and revisionary, but not in the way people expected. Jesus didn’t come to say that he would free us from the moral standards of the Old Testament Law, but instead he “ups the ante.” For instance, adultery is condemned under the Old Law; Jesus says that even thinking lustful thoughts is sinful under the New Law. He refocuses attention, not on a series of commands written in stone, but rather on a law that is written in the hearts of humanity. His is a revolutionary teaching, not against an oppressive government but against our own hardness of heart.

In this week’s Gospel, Jesus calls us to give more than we can ever imagine, but he also promises to give us the grace and ability to fulfill that call.

The attainment of wisdom is Sirach’s primary theme in this passage. The first step toward wisdom is to fear the Lord, that is, to reject sin. This passage addresses the freedom we have to adhere to that law of God which leads to true wisdom—or not. We’re free to choose, but Sirach makes it clear that the choice isn’t equally weighted on both sides. You might say that we're free to choose but not free to sin.

Our choice isn’t an arbitrary one in which good or evil are merely neutral alternatives. Obedience to the law leads to life, and disobedience to death. Righteousness conforms to our nature, made by the all-wise God, and  lawlessness  causes our very nature to decay. We may be free to choose to sin, but our freedom isn’t a permission to sin, as is sometimes thought today. Sirach says that freedom is only ennobling when it’s exercised in pursuit of wisdom through adherence to the Law of the Covenant. The gift of freedom can’t be understood apart from the Giver. Sin is exactly a violation of our freedom because it leads to  the  ultimate  slavery— death. Our ability to choose to sin should never be misunderstood to be a “freedom to sin.”

We can only imagine the flame that the realization of God’s plan in Christ sparked in St. Paul. He entirely poured himself out in the service of the Gospel. We can see a glimpse of Paul’s goal in the description of the Beatific Vision of Heaven he gives us: “Eye has not seen and ear has not heard, and what has not entered the human heart what God has prepared for those who love him.” It’s somehow fitting that the mysterious plan of God should have a mysterious goal.

As we begin to draw back the curtain on the Christian mystery by our participation in the liturgy, the reading of Scripture, private prayer,  and works of mercy, we find that as the mystery of Christ’s life begins to take shape in our souls, the mysterious life of Heaven begins to sprout there, too. It’s out of this kind of experience that St. Paul speaks in this passage. Owing to his direct participation in the plan of God, the mystery of Christ wasn’t merely a goal, but the a wisdom that Paul carried around with him. He drew from this inner wellspring when he shared the revelation of the mysterious plan of God that we call the Gospel.

Matthew shows us that Jesus understood himself to be an important instrument in God’s plan for the future of Israel and the Gentiles as well. In this passage, Jesus explains that his intention isn’t to abolish all that has preceded him in God’s revelation to the Jewish people, particularly the laws given through Moses. Rather, he has “come not to abolish, but to fulfill” Jesus’s position on the Law is perfectly in concert with both his divine nature and his human nature. He will fulfill, not abolish, all that has gone before.

He shows us just what he means by giving a list of particular references to murder, adultery, divorce, and false witness. In each case, with one exception, he doesn’t abolish what went before. On the contrary, he strengthens the requirement, placing a deeper obligation on the Christian disciple than the Mosaic Law had done on the Jew. We see Jesus not only acting as the new Moses, but correcting Moses and speaking on behalf of God’s original design. In Matthew, Jesus isn’t merely a new Moses but the God who spoke to Moses. It’s in this capacity that he fulfills the Law by calling the disciple, not merely to obedience, but also to a deeper, more obedient love.

Today we are going to look at the New Law of Jesus given in the Sermon on the Mount—a law that has a much higher aim than governmental laws. While laws of the government typically aim to maintain order and harmony in society, we will see that Jesus’s law does so much more: It calls us to love, not merely avoid hurting each other. Please watch the short Opening the Word video on FORMED.org.  Then reflect upon these questions and discuss them with a friend.

The presenter says that Jesus didn’t abolish the Old Testament Law but actually “upped the ante.” What are some examples of how Jesus did this?

Digging Deeper: Contents of the Law

The Old Testament Law is found in the books of Exodus, Leviticus, Numbers, and Deuteronomy. It includes the Ten Commandments, moral and social laws, food laws, purity laws, feasts, offerings, priestly instructions, and other ceremonial laws.

Before Advent, there lies before us the Solemnity of Christ... END_OF_DOCUMENT_TOKEN_TO_BE_REPLACED

What will our Thanksgiving, Advent and Christmas be this year? With the continued rise of COVID-19 infections still casting... END_OF_DOCUMENT_TOKEN_TO_BE_REPLACED