No Servant Can Serve Two Masters 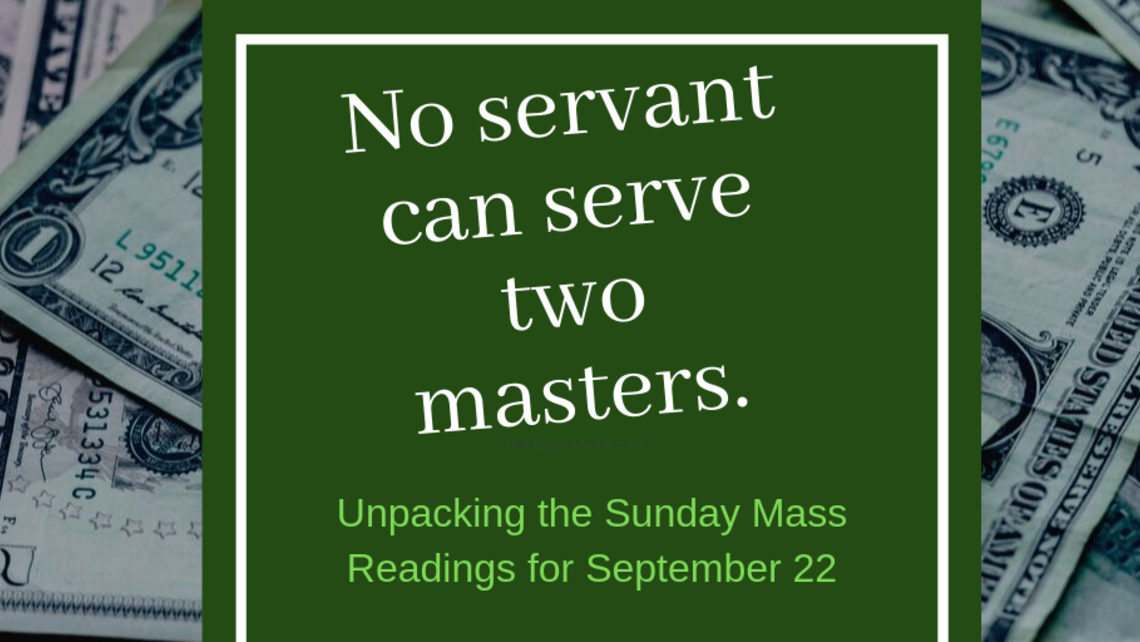 Today’s Gospel passage is one of the more confusing ones for many people.

It tells the story of the dishonest steward who writes off part of his master’s debts, in essence cheating his master of some of the money that was due him. And yet Jesus commends this dishonest man. What are we to make of this?

First of all, this is not a morality parable. Jesus is not telling us that we should become dishonest. Instead, the purpose is to show us that we must think ahead; we must plan for our eternal future, not just for our lives in the here and now. In the story, the rich master stands for God, who has entrusted much to each of us in the  way of talents,  financial resources, abilities, and more.  Like the master, one day he will ask if we have used wisely what we have been given freely. However, unlike the master in the parable, God wants us to give away generously what we have been given generously. He wants us to give away his gifts to free others literally and figuratively.  So, in commending the steward, Jesus  is telling us that if we are like him, we will be generous with all we have been given. Then, when we stand at the gates of heaven, there will be many friends who will speak up for us, just as those whose debts were forgiven spoke up for the steward.

Lying at the heart of this parable are two important questions: How am I stewarding the resources God has given me? What am I doing now with what God has entrusted to me? Our response is vital, for, as Jesus is telling us so clearly, one day we will all be called to render an account.

The dire predictions of Amos may have seemed laughable to the wealthy inhabitants of the northern kingdom. The problem was that Israel had exchanged the worship of foreign gods for the worship of sex, wealth, and power, and as a consequence, their official worship had become hollow and blinded them to the plight of the poor. Sound familiar?

Amos reminds us that religion isn’t an insurance policy against our sins, especially those committed against the poor. The whole of the life of God’s covenant people was supposed to be suffused with the Spirit of covenant love. This was to include not only their religious practice, but also their moral, political, and economic lives as well. Without a real concern for the weakest among us, the blessing of wealth can be a curse of blindness in regard to our position before God. Before God none can boast of beauty, wealth, fame, or power. Before God we’re all poor.

In his first letter to Timothy, St. Paul gives us a good account of the way in which our relationship with the state ought to be regulated. In Romans 13 he says that all authority has God as its origin and is for our good. So it isn’t surprising that he counsels Timothy that prayers should be offered “for kings and for all in authority.” If those in authority receive the graces we ask for them, public life will allow tranquility, piety, and dignity. These three societal attributes were cherished and sought after by the ancients.

The saints have always expressed these characteristics in their persons, and St. Paul suggests that a holy society, one that’s made up of individuals who’ve been receptive to God’s grace, will express the same characteristics. We ought to pray for the grace—and then strive to receive it—which makes our society a tranquil, pious, dignified community. We owe it to our neighbor to work for the best possible social system.

This week’s Gospel reading sometimes shocks readers with its practicality. Is Jesus counseling us to bribe people with ill-gotten gain? This may be if one doesn’t understand the story of the bad steward. However bad a steward he was, there’s no evidence that he was stealing or even cheating. We’re only told that he was badly handling his master’s goods. So Jesus isn’t commending bad behavior in this parable. He’s suggesting that even a bad manager knows how to get the most out of worldly goods when push comes to shove.

So we’re being told that, if we want to be found worthy to be children of the Father, heirs of the wealth of the kingdom of God, we must first show ourselves to be good servants of his household. If we’re not first good stewards of the Master’s goods, he won’t give us our inheritance as adopted sons and daughters. If we treat the Master’s goods as if they were our own, as did the bad steward, we may never receive a reward. But if we give up our profit for the benefit of the Master and his debtors, he will supply us with an everlasting reward in the kingdom.

Take a moment watch the Opening the Word video on FORMED.org

Let’s begin by looking at some of the details of this Gospel reading. What was the steward’s role or job? Why do his actions seem confusing at first glance? What is it about his actions that gains favor from the master?

At the heart of the message of today’s Gospel reading is both a command to use our gifts wisely and a reassurance that God rewards those who do so. Why does the master commend and reward the steward for his actions? How is this analogous to our lives today? Why is it important that the steward was “making friends” with the debtors?

Reprinted with permission from  Augustine Instituted from the Opening the Word Leader Guide available on FORMED.org

Saints: Examples of Lives of Love

Fr Carl's Response to the Vandalism of Saint Statues
July 7, 2020

“The saints have always been the source and origin of renewal in the most difficult moments in the Church’s history.” St Pope John Paul... END_OF_DOCUMENT_TOKEN_TO_BE_REPLACED

On Monday, July 6, the Sacrament of Reconciliation will resume inside the church in our newly configured confessionals. While waiting in line, please maintain... END_OF_DOCUMENT_TOKEN_TO_BE_REPLACED