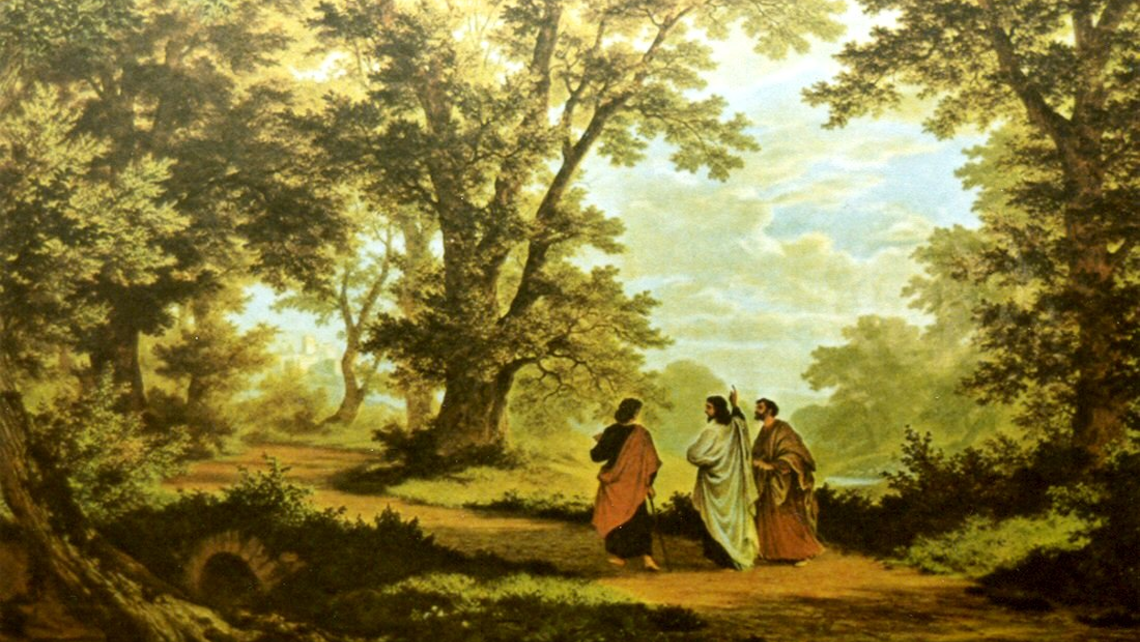 Reflection for the Third Sunday of Easter

The two disciples on the road to Emmaus in today’s reading came to know the Lord in the “breaking  of the bread”—the Eucharist. We can see that their encounter with Jesus that day parallels the way Jesus comes to meet us in every Mass.

Then, as we experience the “breaking of the bread,” Jesus gives us his very self, his Body and Blood. At that moment, our eyes can be opened and we are able to see Jesus in our midst. When we receive the Lord with an open and receptive heart, we know that he is alive . . . and with us. We begin to have a glimpse into the awesome plan of God for our own lives. The second half of the Mass, like the second half of the Emmaus story, centers on meeting and recognizing Jesus.

Finally, like the disciples who run back to Jerusalem to share the Good News, we too, at the end of every Mass, are commissioned to be ambassadors of Christ who has revealed himself in the Word and in the Eucharist.

Peter’s main theme in addressing his fellow Jews is that Jesus is the promised Messiah, as demonstrated by the signs he worked and his Resurrection. Messianic expectations of the Son of David included mastery over nature. The messianic heir of Solomon was expected to perform signs of the kind preserved in the legends of Solomon. Peter proposes that Jesus had passed this test and that his miracles were, in fact, his “credentials” from God. The Resurrection is presented by Peter as the fulfillment of Psalm 16, which promises that the faithful one won’t undergo the corruption of the grave.

The Jewish population gathered in Jerusalem didn’t need much more in the way of sacramental preparation. We’re told that three thousand were baptized as a consequence of Peter’s preaching. The faith of the Jews made it possible to receive them quickly into the Church. It was enough for Peter to announce that what had been believed about the Messiah had indeed been fulfilled in Christ. As good Jews who knew the teaching of Judaism, they needed only to profess faith that Jesus was the culmination of that tradition as Messiah and Lord.

We hear in this reading a much more mature Peter than we heard in the first reading. This letter is believed to have been written thirty years or more after that first proclamation of the Gospel in Acts. The themes are remarkably the same, however. The Gospel still revolves around the basic idea that Jesus was the chosen one of God who suffered, died, and was raised. By that Resurrection we’re given cause for a faith and hope, which save us from the “futile” way of life we would otherwise live.

That faith makes us strangers or exiles on this earth and aware of the just judgment that the Father will pronounce on those who don’t conduct themselves with the reverence due him. The mercy we receive through his Precious Blood doesn't exempt us from his justice; rather, it demands that we act reverently and with mercy. So reverently, in fact, that our status as aliens in this land is manifest to those who don’t share our faith. 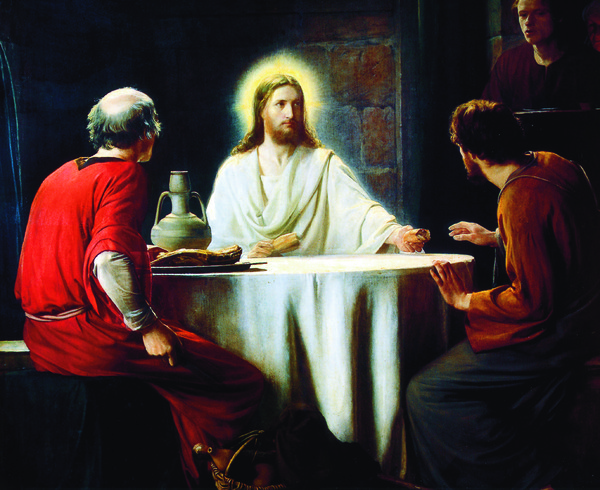 Through his words and in the breaking of the bread, the risen Christ made himself known to two disciples on their way to Emmaus (Luke 24:13-35).

In this reading, we see Jesus seeking two disciples who are leaving Jerusalem in despair over Jesus’s death and apparent failure. Jesus’s meticulous care in gathering up and confirming his disciples in faith after his Resurrection ought to give us great confidence in his love for all, even those who have walked away from him. The lesson for us is that without the gift of faith, even the obvious can seem obscure. This story in Luke also gives us some direction as to where to find the grace necessary to overcome our ignorance. We’re told that in the “breaking of bread” they recognized him. That term is widely considered to have been a kind of code term in the early Church for the celebration of the Eucharist.

This narrative itself exhibits a form like that of the Mass. It begins with a Liturgy of the Word: “Beginning, then, with Moses and all the prophets, he interpreted to them what referred to him in all the Scriptures." It closes with the “breaking of the bread,” as happens in the Liturgy of the Eucharist. Through the Sacraments generally, and the daily Sacrament of the Eucharist particularly, the Church learns to see clearly what was formerly obscure.

Emmaus, meaning “warm spring,” was a small town located about seven miles northwest of Jerusalem. In addition to the mention in the Gospel, Emmaus was the site of other events in both Old and New Testament times. Around 166 BC, Judas Maccabeaus fought a battle there (1 Maccabees 3:55–4:22). Before the siege of Jerusalem and the destruction of the Temple in 70 AD, the Emperor Vespasian’s fifth legion was stationed there. It probably was located at or near the Palestinian village of Imwas, which was destroyed in 1967.

DIGGING DEEPER: Liturgy of the Word

The Liturgy of the Word consists of eight parts:

Watch the short Opening the Word video that accompanies this reflection at FORMED.org

Before Advent, there lies before us the Solemnity of Christ... END_OF_DOCUMENT_TOKEN_TO_BE_REPLACED

What will our Thanksgiving, Advent and Christmas be this year? With the continued rise of COVID-19 infections still casting... END_OF_DOCUMENT_TOKEN_TO_BE_REPLACED