A Place of Encounter 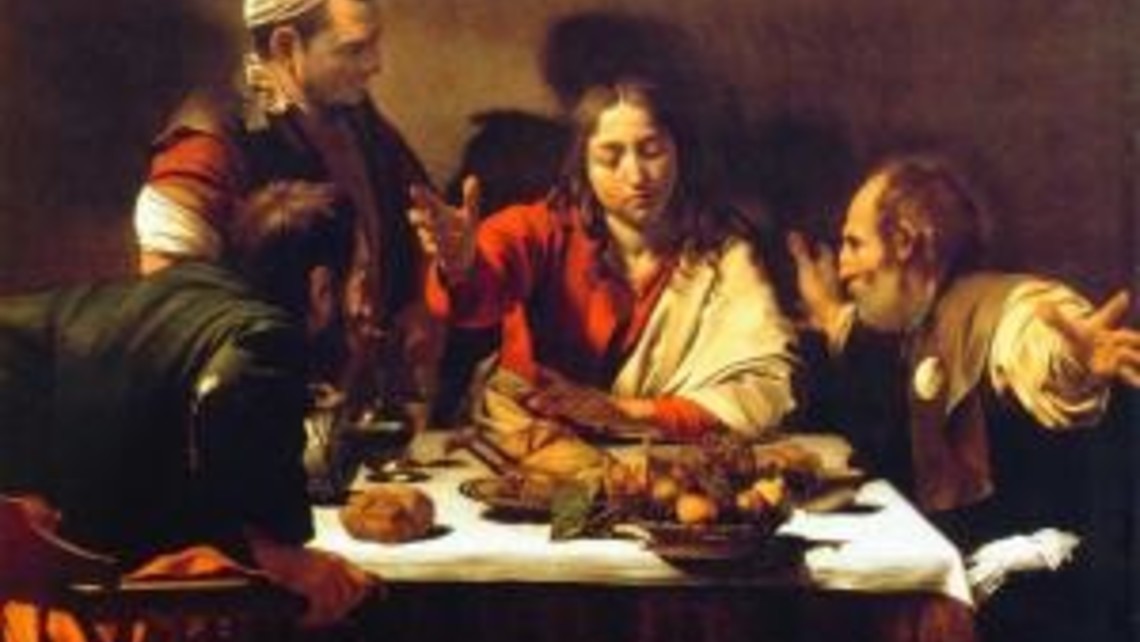 Scripture Reflections for the Third Sunday of Easter

A meal with Jesus Christ, himself. What would it be like if Jesus asked to share dinner with you and your family tonight?

Each Sunday Jesus invites you to share a meal with him—to encounter him in the most intimate of ways. How do you approach the Mass? Do you show up late, wearing what you worked in all day, and with your laundry list of “to-do’s” on your mind? Jesus wants to encounter us and touch our hearts every time we meet him in the Eucharist. Take some time this week to reconsider the invitation of the Mass.

Peter delivers this speech, his second following Pentecost Sunday, just after he heals a man who was lame from birth. It is the hour of prayer, and the Jews are gathered at the Temple. This healing miracle gives Peter the opportunity to preach Christ crucified and risen to the crowd that has gathered in the Temple portico called Solomon’s. Peter identifies Jesus with the Suffering Servant of Yahweh from Isaiah’s prophecy: “See, my servant shall prosper, he shall be raised high and greatly exalted. Even as many were amazed at him— so marred were his features, beyond that of mortals his appearance, beyond that of human beings—so shall he startle many nations, kings shall stand speechless; For those who have not been told shall see, those who have not heard shall ponder it” (Isaiah 52:13−15, NABRE). As the Suffering Servant, the Jews do not recognize Jesus as the expected and long-awaited Messiah. Although Peter lays the blame for Jesus’s death on the crowd of Jews and their leaders because they demanded that Pilate release a murderer in Jesus’s stead, that blame is mitigated since they act out of ignorance. Further, Yahweh, the God of their forefathers has glorified his servant in fulfillment of his plan announced by the prophets. Now that the truth has been revealed, the crowd is called to repentance and conversion and to faith in Jesus as Messiah.

As Christians, we are called to avoid sin, but we know that due to Original Sin, committed and passed on by Adam and Eve, our first parents, we have inherited a wounded nature and an inclination to sin known as concupiscence (cf. CCC 404–405). However, we are not lost because we have a remedy—an advocate in Jesus Christ who intercedes for us with the Father when we stand accused by the devil. Further, Jesus himself has become our sin offering through his expiatory Passion and Death on the Cross, not only for us individually but for the whole world across all time, people, and places (v. 2). Thus, the shed Blood of Christ on the Cross is an act of sacrifice to wipe away the sins of the world. In response to this great gift, our call to avoid sin is embodied in the exhortation to keep God’s commandments. Those who persist in perpetual sin are liars, and “the truth is not in [them]” (v. 4). For true sons and daughters of God the Father, the way to live and mature in the faith is to keep God’s commandments, and we accomplish this by imitating Christ, and, like Christ, we are perfected through obedience (Hebrews 5:8).

The Gospel reading today recounts the story of what happened to two disciples after they unknowingly encounter the Risen Christ on the Road to Emmaus but only recognize him in the breaking of the bread. When they return to Jerusalem to share their good news with the other disciples, Jesus suddenly appears in the room. As in John’s account, Jesus oﬀers peace, but here the disciples are troubled and question his appearance. Luke’s account emphasizes the physical nature of Jesus’s resurrected body. In response to his disciples’ questioning, Jesus exhorts them to look at and touch his body to assure them that he is ﬂesh and bone rather than a spirit or ghost. They experience joy at his presence yet are still incredulous (v. 41), so Jesus asks for and proceeds to eat a piece of ﬁsh to assure them further. This appearance of Jesus in his resurrected body preﬁgures the resurrection of the body for all of us at the end of time. Jesus reigns in Heaven in his resurrected body, one that can pass through locked doors and appear and disappear at will and is no longer bound to the laws of nature and the limitations of time and space yet is able to consume food. We assert belief in this promise for ourselves when we recite the Creed each Sunday at Mass.

Now Luke recounts how Jesus confirms that all the prophecies about him have come true, thereby uniting the Old and New Testaments and proving that he is truly the Messiah. He reminds them that he necessarily had to suffer, die on the Cross, and rise from the dead for the remittance of sin. Now, the disciples are charged with the mission to preach repentance and the forgiveness of sins in Christ’s name, beginning in Jerusalem and going out to all nations. Thus, the message in Luke’s Gospel (as in John’s) is that mission lies at the heart of discipleship, and the mission is mercy and the forgiveness of sins. Once again, this narrative should reassure us of Christ’s peace and joy as we are reminded that as believers, we are called to participate in his mission of mercy.

What truths have you become aware of in studying our Faith? Have you changed your ways to live in accordance with them or have you continued to “turn a blind eye”?

What does this word “witness” mean? How are you a witness to your faith each day?

DIGGING DEEPER: The Eucharist as Thanksgiving

Today’s Gospel sets the stage for us gaining a deeper understanding of the word “Eucharist.” The word Eucharist comes from the Greek word eukharistia, meaning thanksgiving. As the disciples gather in the room, terriﬁed and thinking they are seeing a ghost, Christ makes himself known to them. He wants to bring them peace in their doubting and comfort in their loss. He is sharing his Resurrection with them. He wants them to see and know that he has conquered death. A grateful heart, one full of thanks, is the only appropriate response to this realization. Each Sunday we have the opportunity to encounter Jesus. Our response to him should be one of praise and thanks as we proclaim in our hearts, “Alleluia! He is risen.”

Phase 1 of our Asphalt Maintenance Project was repairing and restoring our church parking lot. We are happy to... END_OF_DOCUMENT_TOKEN_TO_BE_REPLACED