Prepare the Way of the Lord 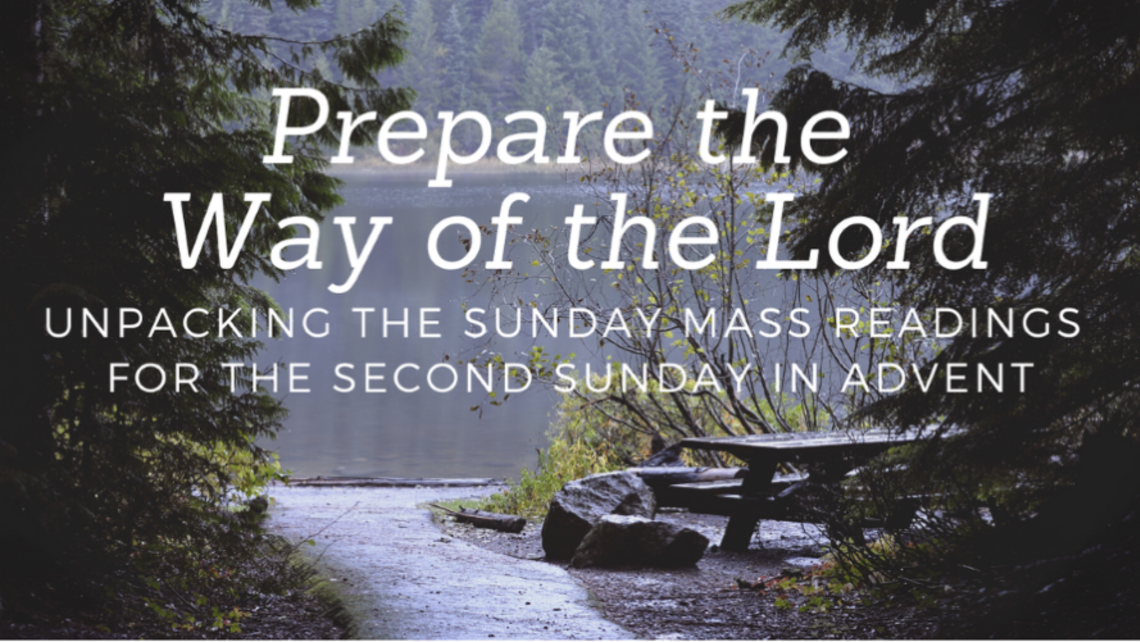 Unpacking the Sunday Mass Readings for the Second Sunday in Advent

It may seem odd that, just as the secular world begins to celebrate peace and joy during the holiday season, we are asked in this week’s Gospel to consider our sinfulness.

The words of John the Baptist echo across the centuries: “Repent, for the kingdom of heaven is at hand!” Isn’t John’s talk about sin, God’s wrath, and the need for repentance a bit of a downer as we prepare for Christmas?

It might seem that way, at least until we think about what it means to “repent.” To repent is not just to realize that we have done bad things, or to to berate ourselves continually for our errors. Repentance does mean that we confess our failures, but that’s just the beginning. True repentance also entails turning toward those attributes and actions that will allow us to unite more closely with Our Lord. It involves an honest examination of conscience and a firm commitment to change.

That’s what John is telling us in this week’s reading when he accuses the Pharisees and Sadducees of being a “brood of vipers.” He is, in very dramatic fashion, asking them to judge their actions against their words; to see if they are living according to the Word of God or merely mouthing words about God. He is calling them to make the dramatic change that lies at the heart of true repentance.

We are asked to do the same thing. What gives us hope is that Jesus, whose birth we will celebrate in a few short weeks, will bring with him the Holy Spirit. This is one of the reasons the Church includes this reading during Advent— for it is the Holy Spirit who breaks through the walls of our sinfulness and pride and illuminates our hearts. It is only through this illumination that we are able to set our feet on a new path, which leads to the abundant life that Jesus has promised is waiting for us.

This reading begins, “On that day.” For Isaiah, this refers to the coming of the Davidic Messiah, made clear by the reference to the “stump of Jesse.” David was the son of Jesse. At the time of Isaiah, the Davidic line was on the throne of the kingdom of Judah, but those following the righteous king Jotham were corrupt. Isaiah’s prophecy suggests that at some future point, a king will come forth; not from the family now on the throne, but from the root of the family tree. That prophecy is fulfilled when the Messiah is born in Bethlehem, the ancestral place of Jesse.

In this reading, Paul concerns himself primarily with the Scriptures; the written portion of Revelation. Specifically here, he refers to the Old Testament when he says that we (the Romans and Christians of every age) should derive “hope” and “encouragement” from what we find in Scripture. He says to accept one another, likely in reference to some tensions between Jewish and Gentile Christians. The conclusion he draws from what is revealed in Scripture is that Christ served the Jewish people as their Messiah, in faithfulness to the promises made by God through the prophets. He has also saved the Gentiles as their Christ, so that they might bear witness to God’s mercy to those beyond the covenant with Israel.

Just two verses after this reading, St. Paul cites a line from our first reading from Isaiah, which prophesies that the root of Jesse will be sought out by the Gentiles, as proof that the revealed plan of God is to bring all nations into unity under the headship of Christ, the Messiah of the Jews. Today, we still live in this age of mercy to the Gentiles; we will celebrate this mercy Incarnate in the baby born in Bethlehem.

John the Baptist is the man who stands at the seam of the Old Testament and the New. St. Augustine teaches that John’s birth to elderly parents (Elizabeth and Zechariah) represents the antiquity of Israel, and that his leaping for joy while still in his mother’s womb at the Visitation of Mary suggests the newness of his coming prophetic proclamation. In his appearance and actions, John sums up the whole of the Old Testament. His clothing is the same as Elijah’s, the greatest prophet of the Old Testament. He calls Israel out into the desert for purification as Moses did, and prepares the people to be led into the new Promised Land by the new Joshua (Yeshua=Jesus). His diet consists of locusts, which are symbolic of pestilence, and honey, which is the food of the Promised Land.

John the Baptist’s most prominent virtue is humility. “I am not worthy to carry his sandals,” he says of Our Lord. Carrying one’s sandals at this time would be the work of a slave—and John sees himself as unworthy of even that office! If we’re to prepare ourselves and others for the coming of the great King this Advent, then we should first turn our attention to our need for a humility like that of St. John the Baptist, the first herald of Christ.

On this Second Sunday of Advent, let us consider how the message of John the Baptist calling for repentance is an essential part of our lives as Christians. As you watch the short Opening the Word video found at FORMED.org, think about how God has called you to enter into a new relationship with him.  Then reflect upon and discuss the following questions with a friend:

If you haven't been to Confession in a while, or just want a better understanding of this Sacrament of Healing, please watch sessions 1, 2 and 3 of FORGIVEN: The Transforming Power of Confession on FORMED.org

In addition to the regular Confession hours, the sacrament is also available on Wednesday, December 11 and 18, between 5:30 pm and 7:00 pm.

When we say the words of the Agnus Dei, or Lamb of God, during Mass, we are directly quoting John the Baptist.... END_OF_DOCUMENT_TOKEN_TO_BE_REPLACED

Evangelization has been in the Christian vocabulary since the very beginnings.

If you have time to study and read prayerfully... END_OF_DOCUMENT_TOKEN_TO_BE_REPLACED

Anointed by the Spirit

Have you ever considered with whom Jesus spends most of his time?

With whom he enjoys hanging out? Whom he considers his... END_OF_DOCUMENT_TOKEN_TO_BE_REPLACED