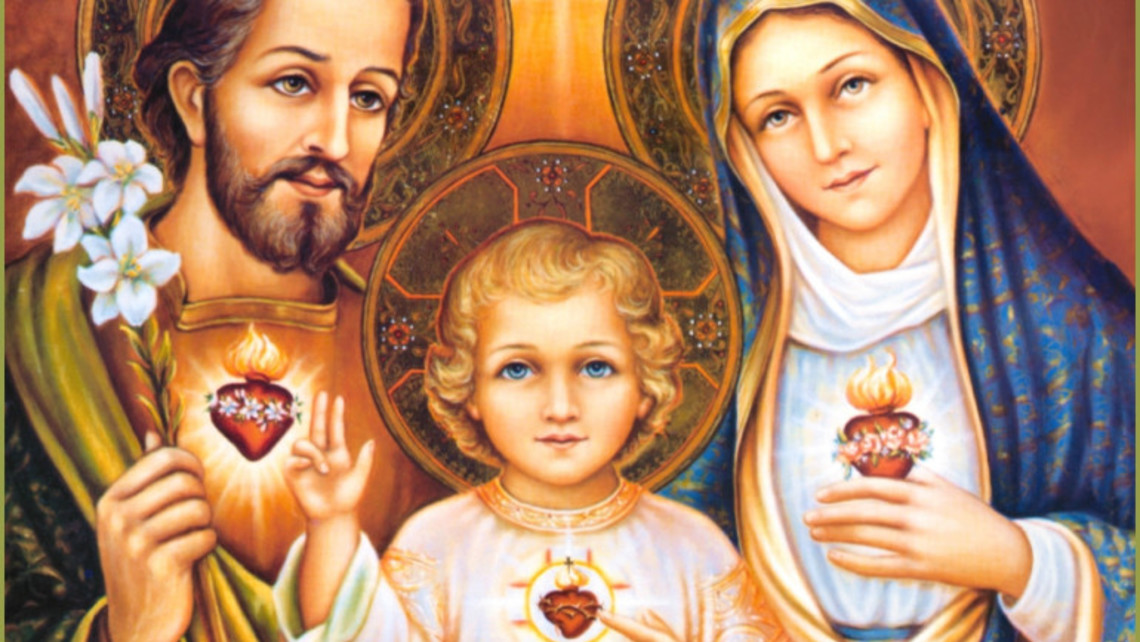 Scripture Reflections for the Holy Family

The first two readings today focus on the relationships with our family.

We are told that honoring and respecting our father is of the highest importance and, if we are faithful to this call, we will be blessed by God. When we read the Gospel, the theme changes from focusing on our earthly family to being faithful to God, our Heavenly Father. If we ought to respect our earthly father and spend so much time and energy making our earthly home virtuous and holy, how much more ought we work to have a relationship with our Heavenly Father? How often do we take the time to talk with God, or honor him by serving him or making sacrifices for him? Let us remember the words of Sirach and St. Paul this week, not just in relation to how we treat our earthly fathers, but, most importantly, in how we relate to God the Father.

In the third chapter of Sirach, the author discusses the importance of honoring one’s parents, as required by the Fourth Commandment. For the Jews, the bond between parents and children was not merely one of mutual obligation or even affection. Rather, their connection to their parents established their claims to the covenant promises of God. Genealogies, such as the ones we see for Jesus in Matthew’s and Luke’s Gospels, were maintained to demonstrate these covenant claims. In the Jewish mind, the genealogy guaranteed that they could be identified with the corporate personality of Israel. This became a particularly prominent practice after the Babylonian Exile. We see John the Baptist responding to this by declaring in no uncertain terms in Matthew 3:9 that lineage is not as important as grace: “God can raise up children to Abraham from these stones.”

In this context we can better understand Sirach’s claims that honoring one’s father and mother brings with it a whole host of spiritual and mate- rial benefits. All of these were believed to come through the covenant, and one’s parents represented the source of that covenant relationship with God. Thus, honoring one’s parents was a matter not only of justice, but also hope in maintaining the covenant.

The primary key to Christian living is, as St. Paul points out, love. Later in this passage, St. Paul will tell husbands specifically to love their wives, but it is clear that everyone is called to love. The realization that love is a universal injunction clarifies another injunction that St. Paul mentions: “Wives, be subordinate to your husbands.” Though this may sound chauvinistic, what is St. Paul really saying?

The first thing to note is that just as loving others is universal, so is submission. In Ephesians 5:21, St. Paul says, “Be subject to one another out of reverence for Christ,” and then goes on to repeat the same injunctions to husbands and wives that we find here in Colossians. Pope St. John Paul II makes the point that it is only in this context of mutual submission that St. Paul’s instructions for husbands and wives make sense. It may well be that St. Paul is expressing a keen insight in regard to marital psychology, and reminding both husbands and wives of the areas where they struggle most in their responsibilities to love each other.

One thing has to be kept in mind when considering this passage: the model in all our actions is Christ who, in conformity with the whole witness of the New Testament, St. Paul likens to the husband of the Church. If his modeling of the role of the husband is normative, then we must recall that he made himself subject to us in loving us to the end. Likewise, the Bride of Christ must be subject to Christ, to be true to her love for him.

St. Joseph is a fascinating and enigmatic figure in the infancy narratives of Matthew and Luke. Like an earlier biblical figure by the same name, he is the recipient of divine direction through dreams. In a set of three dreams he is told, first, to take Mary as his wife, secondly, to take Mary and the Christ Child to Egypt, and, lastly, to return to Palestine with his family. Matthew connects each of these events with a fulfillment formula. The Scripture scholar, Fr. Raymond Brown, calls this a “nota bene technique” by which the evangelist highlights the event by connecting it with a prophetic utterance from the Old Testament.

The first two connections are fairly clear, the cross references in most Bibles connect the first dream of Joseph with Isaiah 7:14 and the second dream with a fulfillment of Hosea 11:1. The last nota bene event is a little less clear, however. In regard to Joseph’s decision to go to live in Nazareth, we read in the last line of our Gospel passage, “In this way, what was said through the prophets was fulfilled: ‘He shall be called a Nazorean.’” In this case, the cross reference in the Catholic RSV cites Isaiah 11:1, which reads, “There shall come forth a shoot from the stump of Jesse, and a branch shall grow out of his roots.” Many commentators flatly confess ignorance in regard to the reference meant in Matthew 2:23, since neither the citation in Isaiah nor anything else in the Old Testament seem to have much to do with it.

The citation in the RSV to Isaiah 11:1, however, does seem to preserve an obscure connection. The word for “branch” in Isaiah 11:1 is a rarely used Hebrew word netser. It does mean a green shoot or branch but also has the connotation, because of its linguistic root, of hiddenness or even the guarding of something hidden. It is suggested that this rare Hebrew word may be the root for the name Nazareth (which would mean “branch- town”). It is interesting to note that Nazareth is an out of the way place where Joseph feels he can guard the hidden branch of the root of Jesse.

In the First Reading from Sirach, we are given a model of family life. He speaks of taking care of our parents, “even if his mind fail, be considerate of him; revile him not all the days of his life; kindness to a father will not be forgotten” (Sirach 3:13).

How do you honor your parents?

Do you show them respect, despite their imperfections?

In today’s Second Reading, we hear the virtues that we need to live peaceably with others, particularly with our family.

What virtues do you need to grow in?

Digging Deeper:  The Key to Meeting the Unexpected

Simeon and Anna had both been promised by God to see their Savior before they died. However, they had not been told what this would look like, when they would meet him, or how they would know. When we put ourselves in their shoes, it’s amazing that they recognized their Savior as a fragile, dependent baby. Christ came in the most unexpected way, yet they were able to see him. The Gospel tells us they spent their whole lives fasting and praying as they awaited Christ’s coming, and this must be the key to understanding how they were able to recognize Christ. They emptied themselves of worldly attachments through fasting and quieted their souls to hear God through prayer. Make a weekly long-term commitment to incorporate both prayer and fasting into your life so that you, too, may recognize Christ in unexpected moments and places.

What is patience? It’s a word that we often use, but it is much deeper than not losing your temper when there is a line in Walmart.

The word “patience” comes from the Latin root pati, which means “to suﬀer” or “to endure.” Patience, then, means more than to simply wait, but to endure  suﬀering without complaint. In order to be truly patient, to endure suﬀering, we must look to the example of Christ. He didn’t half-heartedly accept that he had to be nailed to the Cross, but rather embraced his suﬀering and endured it with love. He kept us in mind. How can you rely on God’s grace and Christ’s example to be truly patient with the suﬀerings you bear right now?

Phase 1 of our Asphalt Maintenance Project was repairing and restoring our church parking lot. We are happy to... END_OF_DOCUMENT_TOKEN_TO_BE_REPLACED