Stand Up and Go 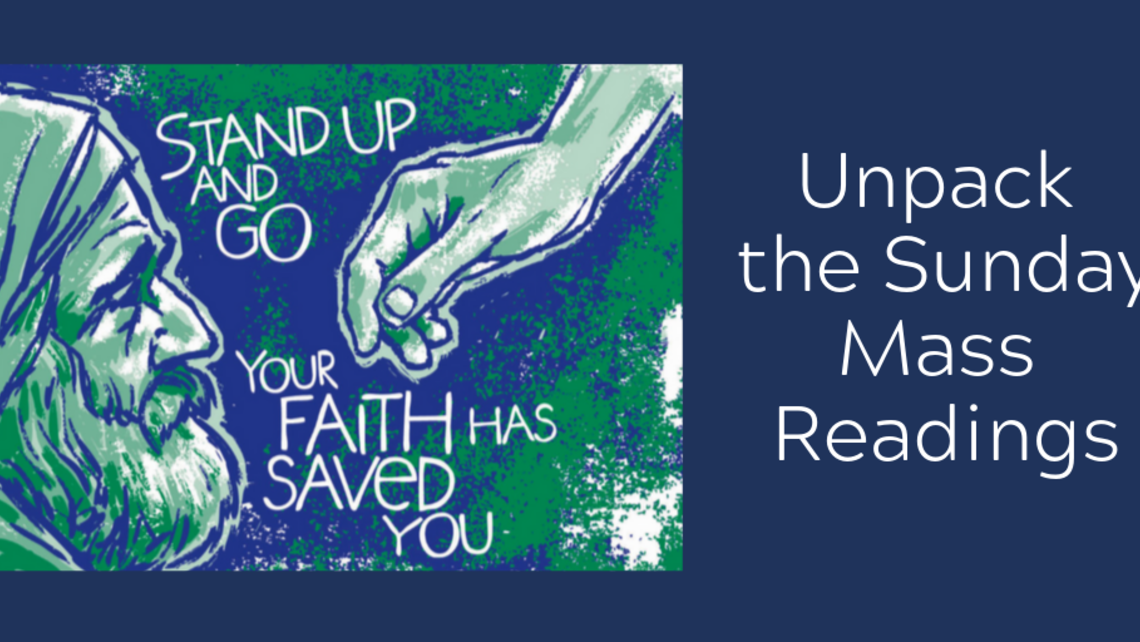 Last week we talked about the gift of faith and how even the smallest amount of faith could move mountains.  This week our Scripture readings focus on gratitude.

We’ve all heard the saying “Have an attitude of gratitude.” For Christians, this is more than a greeting card saying; it is a basic command of Christian life. The theme of gratitude underlies this week’s Gospel reading that tells of ten lepers who were healed by Jesus. In the reading, ten lepers earnestly long for healing since leprosy was one of the great curses of their time, causing those who suffered from the disease to live apart from family and friends. All ten turned to Jesus in faith with their request. However, after they are healed, only one of the ten returns to thank him for answering their prayer.

While Jesus makes it clear that it was the man’s faith that healed him, the story has another lesson as well. Although we must begin our prayer requests in faith, they should end in gratitude. All too often, we are quick to make requests, but slow to return in thankful prayer. Like the nine lepers who did not come back, we neglect to express our thanks to God when our prayers are answered. However, thankfulness is a hallmark of a true disciple. As 1 Thessalonians 5:18 says, “In all circumstances give thanks, for this is the will of God for you in Christ Jesus.” Meister Eckhart, a medieval mystic, once said, “If the only prayer you ever say in your entire life is thank you, it will be enough.” How often do you remember to say “thank you” to God?

There are sacramental resonances, including Baptism, found in this story. The seven washings is another. In Hebrew, “seven” means completeness and is virtually synonymous with the covenant, owing to the importance of the Sabbath or seventh day. In our seven sacramental celebrations we receive faith in the one God, as did Naaman, and the abundance of divine life of grace.

Naaman still holds to the ancient idea that gods are resident in particular places and invoked by the people of that place for their protection. That’s why he requests some earth to carry with him back to Damascus. He may have had in mind erecting an altar to Yahweh on the earth brought from the Promised Land and so constructing for himself a little island of Israel in Syria. Christ reveals that God’s covenantal favor extends to every person of every nation, that he’s the one God of all. How ironic it is that Naaman is used by us as a symbol of the universal sovereignty of God and yet he still believes that he must take Israel with him to Syria if he is to worship God there.

The real reason that Paul and millions like him have been willing to exert themselves to the point of death is found in two simple lines in our reading. The first is, “Remember Jesus Christ, raised from the dead” was “a descendant of David.” Jesus is the messianic heir of the eternal throne promised to David and, as proof of that, he rose from the dead. That terse statement contains the whole of the Gospel. The second simple line explains Paul’s willingness to undergo unbelievable trials, “I bear with everything for the sake of those who are chosen.” He’s not suffering for his own reward, although that’s promised, but that others “may obtain the salvation that is in Christ Jesus together with eternal glory.” The whole paradigm of the Christian life is contained in those two short phrases. Anything necessary, including loss of life, is worth the salvation of even one soul. Each of the chosen of God is loved so completely by Christ that he was willing to die for that one. His love for us and others calls forth a response of love in us. It comes down to the great commandment—love of God and neighbor.

It’s important to note that this episode is set on the border between Galilee and Samaria, both of which were avoided by pious Jews. The fact that Jesus is skirting Samaria may indicate that his destination, Jerusalem, makes him unwelcome even by the outsiders in Samaria. So the location itself suggests that Jesus is addressing the needs of covenant outsiders and as an outsider himself. The “distance” between Jesus and the lepers is, like the setting of the story, more than a simple question of geography. Leprosy didn’t simply impose a physical distance upon its victims but a religious one as well. Leprosy left one unable to participate in Jewish ritual practices and was considered symbolic of the ravages of sin. Jesus invites the ten lepers back into the covenant family of Israel and in so doing, was invoking Levitical Law which required that someone cured of leprosy present himself to the priest for examination. The one leper who returned to thank Jesus was a Samaritan—the outcast among the leprous outcasts. He receives the faith that brings him into communion with Jesus and the new covenant community. Jesus declares to him, “your faith has been your salvation.” Ironically, it’s the ultimate outsider who’s received by Jesus into the kingdom.

Watch the Opening the Word video then reflect and discuss these questions:

One of the themes of this week’s Gospel is our response to answered prayer. What are some prayers that have been answered in your life?

What are some of the characteristics shared by the ten lepers? From the details in the passage, describe the one leper who returned to thank Jesus.

Leprosy was one of the biggest social stigmas of Jesus’ time. Lepers were not allowed to live in society, but had to live apart. They could not participate in the worship of God in the Temple, as they were unclean; they had to announce their presence by shouting, “unclean, unclean!”

What are some examples of modern-day lepers? How do our fears cause us to treat certain people or groups of people without the dignity that they deserve? What does Jesus’ behavior teach us?
Reprinted with permission from Augustine Institute from the Opening the Word Leader Guide available at FORMED.org

Kimberly's Life Changed When She was Confirmed

Kimberly grew up culturally Catholic but had stopped going to Mass after her First Communion as a kid.... END_OF_DOCUMENT_TOKEN_TO_BE_REPLACED

Please join me in congratulating Kathy on her retirement and welcoming Erleene to her new role as our parish bookkeeper.