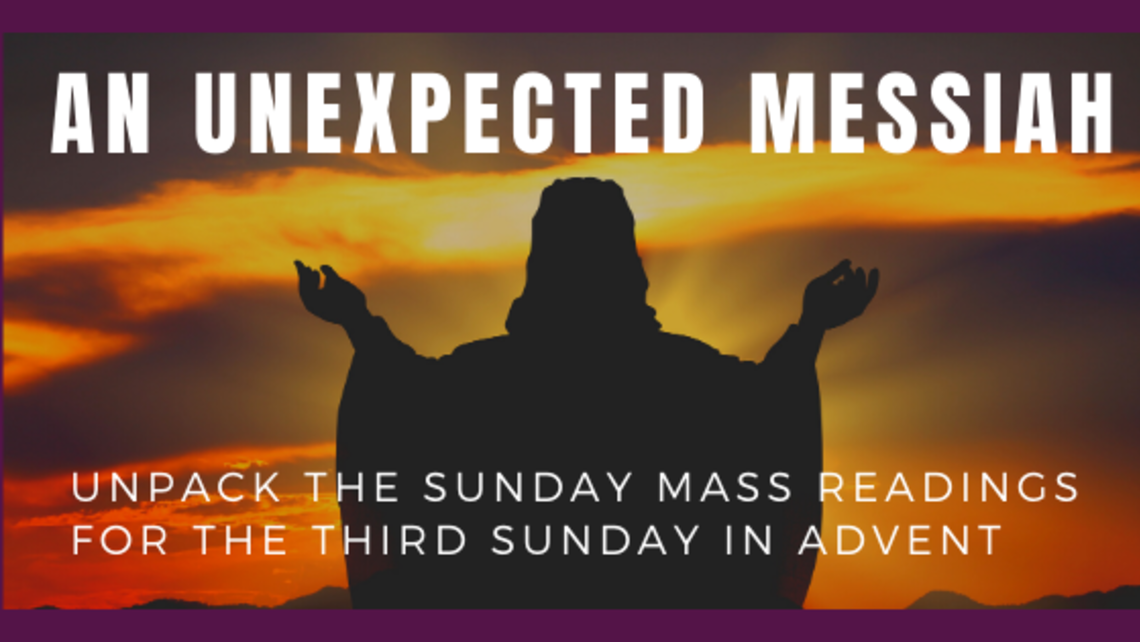 Unpack the Sunday Mass Readings for the Third Sunday in Advent

Who hasn’t felt discouraged at some point in life?

We all know how it feels when things don't go the way we want or expect. John the Baptist was feeling that way in today’s Gospel. He is languishing in prison, wondering if all that he said and did had any meaning. Jesus didn’t fit the common image of the Messiah. He wasn’t a great political leader who would overthrow the Roman oppressors and restore Israel to glory. John’s faith is shaken and so he tells his followers to seek out Jesus and ask him, “Are you the one?”

In response to John’s question, Jesus tells him (and us) to look at what he was doing: healing the sick, raising the dead, bringing the good news to the poor. John would have immediately recognized those actions as the ones Isaiah prophesized that the Messiah would do on his arrival. By focusing on those deeds, John would have known that indeed Jesus was the one. Even though the plan wasn’t going the way John thought it would, he could be comforted by knowing God was powerfully at work.

Sometimes God doesn’t work in our lives the way we expect either. Like John, we can get discouraged and wonder why God is allowing certain struggles and difficulties to happen. That’s when we, too, have to realize that the mission of Jesus is not to establish an earthly kingdom, but to restore us to the fullness of life. When we find ourselves feeling dispirited, we need to consider that perhaps God has us exactly where he wants us to be for our perfect good and perfect growth in holiness.

“They will see the glory of the LORD, / the splendor of our God,” Isaiah promises. Of course, Jesus does heal the physically blind as part of his messianic ministry. While it’s good to receive physical sight, it’s infinitely better to see “the glory of the Lord.” The physical healing is a symbolic representation of the second, greater miracle. The sight of the Lord’s glory had been promised to the whole of the people in Israel, but an apparent failure on the part of the people to purify themselves for that epiphany caused them to lose the chance to behold the Lord’s glory. That promise has been fulfilled in the coming of Christ, who takes on flesh so that we all may behold the face of God. Not only does he open the eyes of the blind, but he also unveils the glory and splendor of the Lord to those who have spiritual eyes to see.

The Epistle of James deserves more attention than it gets. It presents a wonderful, ever-timely plan of life for the Christian. James comments upon the proper attitude toward the “coming of the Lord.” He compares our state to that of the farmer who in waiting for "the precious fruit of the earth, being patient."

It’s worth noting that patience is called for precisely because the crop will come in. James doesn’t say that Christians shouldn’t think about the second coming; he says they should look forward to it— anticipate it joyfully, eagerly—but with patience. If we recoil at the thought of Christ’s coming with thoughts such as “I’m not ready yet,” or “I just need to arrive at my life’s goal before he comes,” then we’re not yet living in the manner that James prescribes.

Most of us would have to admit to thoughts of that kind. Often we’re more concerned with keeping up appearances than with our appearance before the face of God. The timeless Christian message is that we live patiently, looking forward to Christ’s coming; then everything else will fall into its proper place. If we seek first the kingdom, then all else will follow after.

In this passage, Jesus cites the signs of the coming of the messianic age from Isaiah 35 as proof that his ministry introduces the messianic age and concludes that, “Blessed is the one who takes no offense at me.” Jesus subtly makes a similar point in the next set of verses, this time addressed to the crowds after the messengers from John depart. He asks, in reference to their response to John’s prophetic message, “What did you go out into the desert to see? A reed swayed by the wind?”

Interestingly, the reed was a symbol for King Herod. The reference to a “swaying reed” may have suggested that Herod had made a truce with the Romans, which would turn to Israel’s advantage. Just as God had become a stumbling block to Israel then, so would he be to Israel now in the Person of Jesus.

Rather than bending to the current political wind, as had Herod and the Jews who collaborated with Rome to maintain their power, God’s people must turn to the messianic King whose coming and reign is signaled not by the rich trappings of a royal court, but by the lone voice of a prophet crying in the wilderness and the proclamation of good news to the poor.

Watch the short 6 minute Opening the Word video for the Third Sunday in Advent on FORMED.org  Then reflect and discuss these questions with a friend:

How did Jesus answer John’s disciples when they asked him if he was the Messiah?

In what way does Jesus’s answer give John encouragement, despite the fact he is in prison and facing death?

The Death of John the Baptist

John the Baptist was imprisoned and beheaded at Herod’s fortress called Machaerus, located on a rocky hilltop above the eastern side of the Dead Sea. The area had been chosen for a sentry post because it could be seen as far north as Alexandrium and as far south as Masada. In addition, smoke signals were visible in Jerusalem itself. Machaerus was more than a fort, however; it was also a lavish palace, with an extensive court- yard, baths and a beautifully detailed mosaic floor—a luxury getaway place for the king and his court. The story of John’s death in Scripture is verified by the Roman historian Josephus.

Phase 1 of our Asphalt Maintenance Project was repairing and restoring our church parking lot. We are happy to... END_OF_DOCUMENT_TOKEN_TO_BE_REPLACED