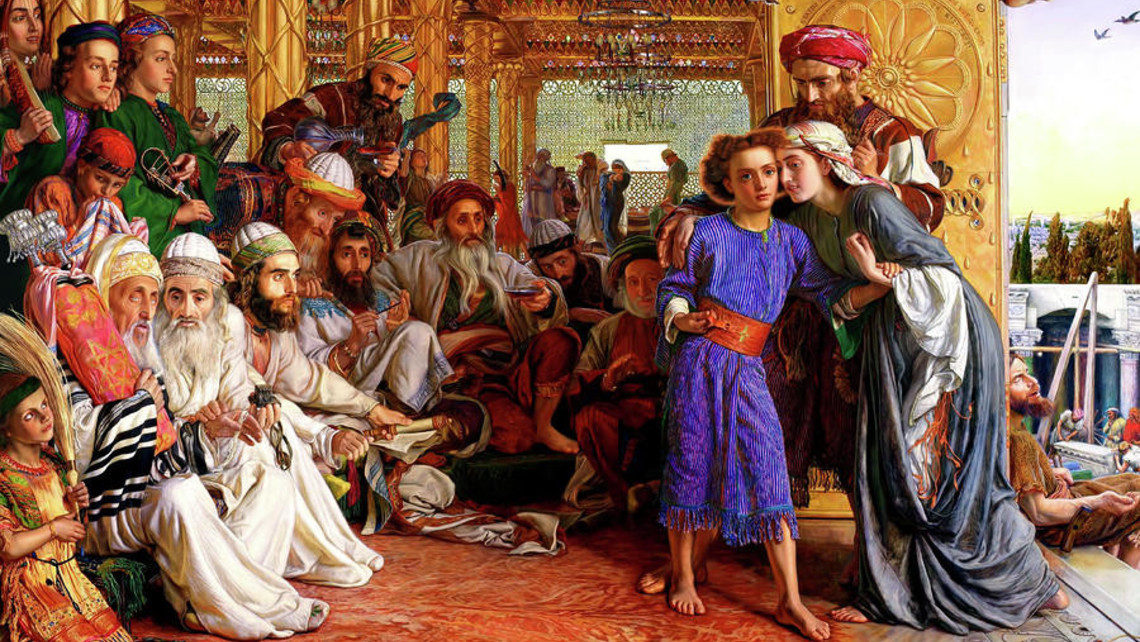 Scripture Reflection for the Feast of the Holy Family

—that she always knew the whole plan of her life from beginning to end and never had to work her  way  through  difficult  periods.

Today’s Gospel reading tells us that wasn’t the case. When Jesus was lost in the Temple, Mary and Joseph didn’t know where he was. They didn’t know what was going on, or how it would all be resolved. It’s safe to assume they prayed, but they weren’t given an instant vision like some heavenly GPS sign that told them where to find  Jesus.  Instead, for three  long days they searched, growing more anxious and fearful as the days passed.

Just like us, Mary had to rely on hope during those dark times because she didn’t have all the answers. When we go through trials, and we will all go through trials, we can draw encouragement from the example of Mary and Joseph. We pray and we persist in prayer, trusting that God always hears us and will respond in his time, not ours, and always believing that when we seek Jesus, we will find him in his Father’s house.

It might seem strange to celebrate the family with a passage showing us a mother surrendering her child to the care of a priest. But the story of Samuel, who is a seminal figure in the history of Israel, is a story about the primacy of faith in God over every other created good. Hannah’s very name, which means “grace,” signifies a special favor in the birth of her son. She sees him as belonging not to her, but to the God who created him in her (her husband’s name, Elkanah, means “God has created”).

Given the special circumstances of his conception, she gives Samuel to God as a perpetual nazirite (from the Hebrew nazir, “to consecrate”). A nazirite is someone who is given to God in holiness of life, as a special dedication to the Lord, for a limited period or, as in this case, for a lifetime. Samuel (whose name means “heard by God”) was the last of the judges of Israel, as well as a prophet and priest. He will, at God’s direction, anoint first Saul and then David as the first kings of Israel. As 1 Samuel 8:7 makes clear, when the Israelites ask for a king like the other nations, they are not so much rejecting Samuel as their judge but the God whom this righteous and consecrated man had represented. In this sense, Samuel is a figure of Christ, who is the consecrated man, born by the gift of God. If we put the world and the things of the world before him, we, too, will have rejected the reign of God over our lives.

This First Epistle of St. John could rightly be called the “love letter” of the New Testament. Over and over again in it he enjoins his “Beloved,” his “little children,” that is, all Christian believers, to “love one another.” It is hard to believe that this is the same apostle that Jesus had nicknamed along  with  his  brother  James  the  “sons  of thunder” (Mark 3:17). Recall that they had asked Jesus if he wanted them to call down fire from heaven to punish Samaria for its lack of hospitality toward him (Luke 9:54). What

a change we see from the early John to this man of overarching love. As we know, he was the one who reclined on the heart of Jesus and remained by him to the end of his life, who stood with Mary at the foot of the cross. It is proximity to Jesus that makes us into lovers of him and our brothers and sisters. And what we learn from proximity to Jesus is sonship with and in the Son. It is by sharing in his perfect sonship, by watching his own expression of perfect filial love for the Father that we enter into the kingdom of the children of God. As the Catechism puts it, “To become a child in relation to God is the condition for entering the kingdom” (CCC 526; see also Matthew 18:3-4).

The joyful mysteries of the holy rosary culminate in this remarkable story that “breaks the silence of the Gospels about the hidden years of Jesus” (CCC #534). But it can be hard sometimes to understand just how it found a place also in the list of the seven sorrows of Our Lady. Is it sorrow or is it joy? And, of course, the answer is that it is both, but in a mysterious way that points to a central facet of Christian faith: obedience, embraced with love, leads us to joy, but often through sorrow. The moral delicacy of this story—the dramatic tension between duty and love leaves us in awe of the figures, especially Mary and Jesus (not to neglect Joseph).

Jesus must be obedient to his Father in heaven and so expresses this in preview of his later ministry by remaining in his “Father’s house,” to listen to and question the elders. While the first commandment to honor God is first for a reason, grounding all the others, including the fourth to honor father and mother, in this case we see the perfect father and mother, Joseph and Mary, who love God fully in the very Son they seek “in great anxiety.” He seems almost severe in his response, and they are left somewhat bewildered. Jesus, in the end, is obedient to them and returns to Nazareth. What Mary pondered afterward was likely just this remarkable tension: the obedience to God’s plan that Jesus shows to his Father and which she owes to Jesus as God, must be prior to any lesser loves, even the holiest of loves. And from the sweet sorrow of that deepest of sacrifices will come the greatest joy.

Watch the Opening the Word video at FORMED.org found on the “Community” tab.

Please join us in celebrating the feast day of St. Padre Pio at the dedication and blessing of St. Michael Cemetery’s new Padre... END_OF_DOCUMENT_TOKEN_TO_BE_REPLACED